Dramaworks’ Quiet, Insightful Our Town Is Worth Investing Your Attention, Imagination 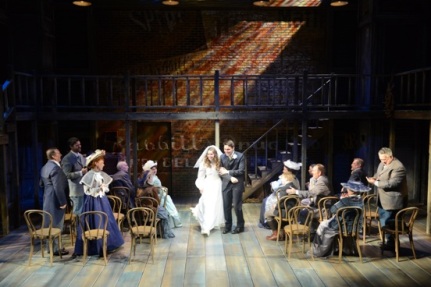 For such a seemingly simple play, Our Town requires the audience to generously invest their attention and imagination. Thornton Wilder’s classic set in a small town in New Hampshire only works when its visitors travel more than halfway there.

But for those willing to make that journey, the gossamer delicate play can vibrate the heartstrings and the synapses, as it does in Palm Beach Dramaworks’ deft production.

It intentionally starts deceptively slow and grows so slowly in complexity and power that you don’t realize its effectiveness almost until you leave the theater.

The ADHD crowd will have missed the point. By focusing on the most mundane and commonplace aspects of everyday living, Wilder underscores the precious cosmic wonder inherent in life itself in its most humble details – a mother cooking breakfast, children doing algebra homework, the milkman delivering his wares at dawn, the chaste beginnings of an adolescent romance.

It’s a very problematic play to pull off because the tone is so difficult to find and maintain. Hundreds of third-rate productions by high school and amateur theaters have flattened it, hyped it and botched it by playing it too condescendingly cute or too ham-handedly literal or any of a dozen other potential missteps.

But resident director J. Barry Lewis and his troupe of 21 thespians – the most ever on a Dramaworks stage – hit that elusive sweet spot. It does not nostalgically venerate “the good old days” of small town life that were already long gone when the show bowed in 1938. But the Truth of the verities of simplicity and community and love are more easily visible in a world where change comes slowly if inexorably and where the broad strokes of living and dying are as elemental as the change of the seasons.

Although it is increasingly hard for a 21st Century audience to view much without today’s post-modern cynicism, it was not much easier for the self-styled sophisticates and intellectuals of New York as their neighbors struggled in the Depression. The residents of Grover’s Corners are not portrayed as rubes, but fellow human beings who deserve respect.

Wilder’s genius, one reason he won the Pulitzer Prize, is the glorious indulgence in theatrical devices to acknowledge that this is only a play: the bare stage, actors initially announced by their real names, performers inhabiting multiple characters, monologues addressed to the audience through the fourth wall as if they were in a lecture hall, actors miming most of their activities, pointedly nodding that the moments just depicted were a scene in a play. And by doing that, he allows the audience to see the events with a God-like distance that invests the proceedings with a kind of nobility.

Even the most prosaic of the three acts – the initial look at a typical “day in the life”– Wilder gives the audience subconsciously a sense of how an omniscient deity sees the world – simultaneously past, present and future. Early on, the narrator tells that the young teenage paperboy Joe Crowell we see before us chatting up his customers will go to college, study to be an engineer, but die in World War I.

So many of the techniques Wilder pioneered here may have been invented earlier, but he synthesized them and put them on a mainstream Broadway stage out of a dissatisfaction with how theater’s literalness was interfering with its pursuit of depicting truth.

For the uninitiated, Our Town follows a wide array of characters in a tiny New England town in 1901 with a folksy guide called the Stage Manager. The first act shadows the townspeople from sun up to lights out. The second act three years later shows the marriage of George and Emily, two young people we met in Act One. In flashback, we watch a crucial turning point in their awkward courtship when they link their lives forever.

The third, the brilliant climax set in 1913, investigates death and its place in the cycle of life. It’s the payoff to what Wilder has been sewtting up all evening. It underscores how human beings heedlessly careen through even the most simple bucolic facets of life without appreciating the sublime beauty of the gift. Emily, who has died in childbirth, joins others in the graveyard as they wait for “the earth part of ‘em is burned away… waitin’ for the eternal part in them to come clear.”

But before she settles down, Emily finds she can go back to relive one day. All too quickly, watching from outside the scene while simultaneously taking part in it, she sees how oblivious we are of the glory of being alive.

Besides the insightful leadership of Lewis, the play features an ensemble of actors, most reunited having played at Dramaworks on and off throughout its history. Among them are Dan Leonard as the newspaper editor Charles Webb and Patti Gardner as his wife, Myrtle, and Kenneth Kay as Doc Gibbs and Elizabeth Dimon as his wife, Julia. They are parents to the two newcomers to Dramaworks, Emiley Kiser and Joe Ferrarelli as the youngsters who become lovers and spouses. They lead a cast too large to list but who include Margery Lowe, John Felix and Michael Collins. All create recognizable types in any community, yet invest each with a specificity and uniqueness that keeps them from being cartoonish stereotypes.

Kiser, in particular, is perfection as the mature-for-her-age youngster, then the awkward lovesick girl and then the toughest challenge as the deceased Emily who is stunned at what she learns about life. In a speech usually mangled by high school student actors, Kiser movingly bids farewell to Life as exemplified by acknowledging such shards as sunflowers and clocks ticking.

Holding the center ever-so-gently is Colin McPhillamy, so brilliant in Exit The King last year, creates a chatty genial persona for the Stage Manager. His slow high reedy voice bespeaks a veteran observer who has been a de facto philosopher for years without ever thinking of himself as one.

Lewis is best known for his ability to plumb and communicate the most intricate depths of intellectually complex works. But here he has simply dove deep into the emotional truth of the work. Although he certainly has shown an ability for moving people around the stage without calling attention to his work, the theatricality of this piece allows him to create some striking stage tableaus. One of the best is that during the funeral scene, the dead are sitting in chairs as Wilder instructed, But the mourners are gathered above them on the catwalk, not just “above ground” but a reminder of a separate life churning onward.

In recent years, the show has been played on a bare black box kind of set; a revival in New York in 2009 played with virtually no scenery at all. But Dramaworks’ stage mirrors the 1938 original. Scenic and lighting designer Paul Black has created the unadorned backstage of a 1930s theater, complete with bare brick back wall and weather-worn wooden catwalks under an iron girder, much of it evocatively painted by Rebecca Pancoast. The scenery is just plain tables and chairs left over from a rehearsal. The attention to detail is stunning down to broken slats in the vent for an air handler.

Credit, too, to the period costume designs by Robin L. McGee down to the well-worn vests, suspenders, knickers and high-button shoes. Matt Corey feathers in sound effects like clinking milk bottles that should not be noticed by the audience, but which help create the illusion of something occurring.

There may never be a perfect mounting of Our Town. It is a work of genius but it always gives you the sense that a better production is out there somewhere. It’s almost an unattainable goal for theater artists that they, thank goodness, never stop striving for. But Dramaworks certainly has delivered one of the deepest and most satisfying runs at it than we’ve seen in this region in a long, long time.

Kander and Ebb wrote a quirky atypical love song in the 1965 musical Flora the Red Menace. It was an exquisitely lovely song about the tranquil happiness of being in love, a ballad called, “A Quiet Thing.” That is as good a description as you could ask for Dramaworks’ Our Town.