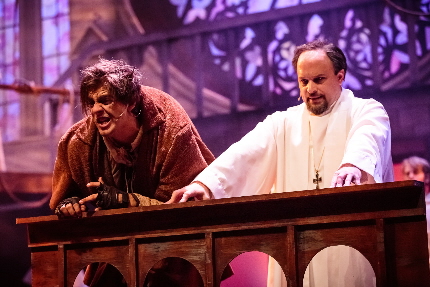 A near epic vision unfolds in Slow Burn Theatre Company’s brave, ambitious and dark The Hunchback of Notre Dame resulting in the one of the most powerful musicals – a specifically chosen adjective – seen in South Florida in recent years.

Featuring two memorable performances, an endlessly hardworking ensemble and orchestra, evocative production values and an invaluable choir flanking the stage, this offering sets expectations even higher for this company once housed in a high school auditorium and now performing at the Broward Center.

Get this clear up front. The original source material was Disney’s 1996 animated cartoon complete with cavorting gargoyles and a semi-happy ending, although it explored some heavy topics. But when Disney songwriters Stephen Schwartz and Alan Mencken and playwright Peter Parnell began to turn it into the next stage success like The Lion King or The Little Mermaid, they found themselves cannibalizing some songs, adding others and veering to the much darker territory of Victor Hugo’s 1831 tragic novel and the many subsequent film versions.

There still are some patented ham-handed Disneyfied stretches left in the raw material and they irritatingly undercut the rest of the piece.

But Slow Burn under the leadership of director/choreographer Patrick Fitzwater and musical director Caryl Fantel elevate the strongest elements into effective and affecting theater that should not be missed. Further, everyone connected to the piece from the designers to the performers is clearly investing everything they have in talent, skill, fiscal resources and energy.

Nowhere is this clearer than the decision to bring in 18 white-robed singers to augment the ensemble and place them in the auditorium boxes on either side of the stage. The full rich power – there’s just no other word for it – that they add to the emotional content and epic feel of the show is incalculable, especially in the complex but glorious liturgical hymn opening the second half of the evening.

The classic plot is well-known although it would help to brush up on it because some plot turns are referenced with a single line or two within the group storytellers’ narration. And Parnell took a few liberties, including a credible backstory for Frollo and Quasimodo that Hugo himself might have endorsed.

Briefly, Frollo, a young priest in Paris, adopts the child that his dying brother had out of wedlock with a gypsy. But the child he names Quasimodo is deformed in face and body. Frollo raises him to be the bellringer in the Notre Dame Cathedral that Frollo now oversees as archdeacon. It is a complex relationship in which the stern judgmental Frollo wants to protect Quasimodo from the outside world, but also resents his birth from gypsies whom he spends trying to exterminate as purveyors of sin and temptation.

When Quasimodo escapes into the streets for the first time as a young man, he is crowned King of Fools by the Parisian populace and visiting gypsies with cruel mockery. When they whip him, he is rescued by the beautiful Esmerelda, a highly independent gypsy dancer and no-nonsense street survivor.

Frollo spots the woman and succumbs to opposing emotions of forbidden lust and rabid revulsion. At the same time, the church’s hunky new captain of the guard, the war-weary Phoebus, also falls for her – and, of course, so does Quasimodo. The quadrangle is destined for tragedy and death.

The story is told directly to the audience by an ensemble of Parisians similar to the community of narrators in The Life and Adventures of Nicholas Nickleby.

The gargoyles and statuary in the church do not dance in this version, but the actors portraying them are clad in white priestly robes and provide voices in Quasimodo’s head as he struggles with crises.

Even though there are nimbly capering Parisians and a few bland Disney songs, the script and much of its score are rooted in profound emotional and psychological underpinnings. Even the ending is faithful to Hugo’s.

The major themes encompass the plight of the poor and oppressed, unbending prejudice against outsiders of all stripes, and the idea that under the most repellent exterior or seemingly hardened pragmatist may well dwell decency, heroism and goodness.

This is underscored by an inspired theatrical device: When Quasimodo is talking to anyone, he is bent over, his face scrunched up and his high-pitched voice slurred, strained and distorted like John Hurt’s in The Elephant Man. But when he is talking to himself or his gargoyle friends, he stands erect to speak and to sing cries of the heart in a strong clear voice.

The themes are also borne out when Esmerelda prays in the cathedral in the gorgeous “God Help The Outcasts,” a moment of selfless altruism for such a hardnosed street denizen – counterbalanced by the other parishioners’ devout prayers to God for their own wealth, fame and glory.

The score and lyrics range from poignant reveries to stock Disney production numbers to stirring anthems to power ballads more common to a Frank Wildhorn musical. But what’s intriguing is that what sounded hokey, simplistic and contrived in the animated film — and many other Disney flicks – is magically transformed into believable genuine sentiment when sung by flesh and blood characters emoting in front of you.

Fitzwater’s staging and choreography is some his best to date. While licensees are not allowed to veer from the written words and notes, Disney also forbids copying any of the staging from the handful of previous versions. That has forced Fitzwater and company to reimagine the show visually, but they are more than up to the challenge.

One example, Quasimodo has gone nearly deaf from the din of his profession, so he and Frollo do talk aloud, and Quasimodo can read lips. But Fitzwater has the two also converse in sign language, establishing a unique bond between them. While it’s unlikely a 15th Century prelate would know 20th Century American Sign Language, it’s still a brilliant idea, which pays off in an imaginative and moving coup de theatre in the finale.

Another moment occurs when a heartbroken Quasimodo reaches out to the touch the hem of Frollo’s robe seeking forgiveness, Frollo pulls his foot away.

Bobby Cassell won note as the rebellious troubled Melchior in Slow Burn’s acclaimed Spring Awakening last season. But his portrayal here of Quasimodo announces the emergence of a significant leading man. As Quasimodo, he effortlessly switches between the anxious public exterior of an innocent gingerly feeling his way through his life and the inner man full of yearnings anyone can relate to. He issues forth Quasimodo’s cries of the heart with falsetto highs and Elphaba-size notes belted to the back of the auditorium. We hope he spends more time here in the future than portraying cartoon characters up in Orlando.

But apologies to Cassell, the stunning performance comes from Slow Burn co-founder Matthew Korinko whose Frollo agonizes as his duality is constantly at war and eventually destroys whatever good may have been inside. Indeed, Korinko has a rich resonant baritone that digs deep into score with stentorian tones, but Korinko’s triumph is as an actor who happens to sing very well. It would have been too easy to slip into a moustache twirling monster with a pathological hatred for outsiders, outcast and immigrant minorities. But Korinko (and the writers) make Frollo more complex – a man genuinely caring for someone he views as subhuman, even becoming emotionally dependent on the adoration. His Frollo has an unyielding exterior that prizes self-control, but at the same time is writhing in lacerating self-contempt exhibited in the excoriating number, “Hellfire.”

Shenise Nunez has been performing in ensembles for several years now in area shows, especially at Broward Stage Door, although she was Morales in Stage Door’s A Chorus Line. But with the lovely, sexy Esmerelda, she gets a chance to show off her clarion smooth voice which can be heartfelt or defiant.  It’s not clear whether it’s the role, the staging or the actress, but she is usually playing straight out to the audience in full musical comedy presentational mode, which is not especially convincing.

Landon Summers is a surprisingly likable Phoebus, evoking a virile man in transition from chastened warrior to conscience-stricken civilian. Trev Whittaker exudes an ebullient smarmy charm as Cleon, the venal king of the gypsies.

The creative team has outdone itself, especially Sean McClelland’s imposing set design of ancient stone, sturdy timbers and the imposing rose window dominating the entire scene, built by Bar Scenic and painted by Cristina Arroyo. But it came to life in varied atmospheres created by lighting designer Becky Montero. Among her effects was changing the hues behind the stained glass windows to depict the emotions being depicted by the performers.

Rick Pena spent the summer designing and building scores of costumes from scratch from the ecclesiastical robes to the peasants’ motley. While the sound was still getting conquering some technical glitches opening night, Rich Szczublewski’s design deftly negotiated both the quiet duets and the tsunami ensemble-choir numbers. Just switching among a couple dozen microphones must have been challenging.

Disney has been judicious about licensing this new version, unlike the flawed original version that ran in Germany in 1999.  Slow Burn’s track record and resources were vetted before Disney gave the theater permission to be only the fifth production.

Slow Burn’s effort in its seventh season opener showed the faith was well-placed.

In the caveat emptor department: It’s a backhanded compliment to Slow Burn’s popularity that somebody is scalping tickets to the show. Know that you can buy them more inexpensively at the box office or through Ticketmaster.

The Hunchback of Notre Dame presented by Slow Burn Theatre Company at the Amaturo Theater, Broward Center For The Performing Arts, 201 SW 5th Ave., Fort Lauderdale. Regular performances through Nov. 6. Performances are Thursday through Saturday at 7:30 p.m., and Sunday at 2 p.m. Running time about 2 hours 15 minutes including one intermission. Tickets are $25-$60. Call (954) 462-0222 for tickets, at www.browardcenter.org or #Ticketmaster.com; in person at Ticketmaster outlets or the Broward Center’s Auto Nation Box Office. Info at www.slowburntheatre.org 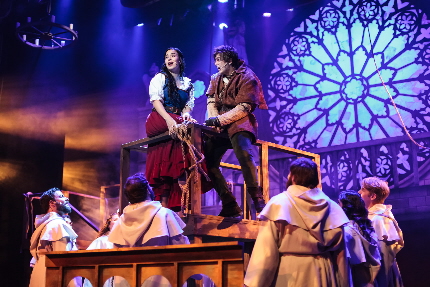