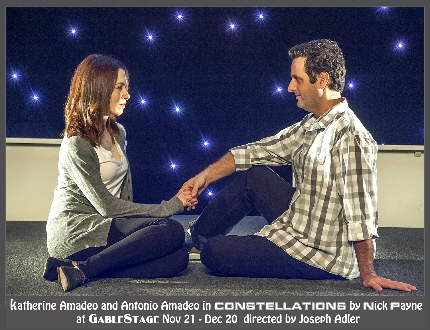 Like a spinning gem with an infinite number of glittering facets, GableStage’s kaleidoscopic production of Constellations is an outstanding achievement in playwriting, direction and some of the most skilled acting you may see this season.

What you can be sure of is that the play’s presentation of fragments from a dozen scenarios for the same relationship is intent on communicating something beautiful about the whole that all those splinters combine to form – whatever it is.

Highly episodic, sometimes a scene lasts a few minutes, sometimes only a few lines of dialogue. But all of it underscores that life is a dazzlingly complex and diverse experience.

At one crucial emotional climax that we won’t spoil, Marianne the scientist says to her husband Roland, “The basic laws of physics don’t have a past and a present. Time is irrelevant at the level of atoms and molecules. It’s symmetrical. We have all the time we’ve always had. You’ll still have all our time.” Trust us, it’s a heartbreaking declaration in context.

If you patiently invest in the evening, a moment does come about an hour into the 75-minute play when most of the shards coalesce and you can see at least one extended stretch of reality that you have only glimpsed in pieces before then.

The minor miracle here is that Nick Payne’s written script has no setting, no emotional cues in parentheses, only a few handfuls of stage directions – little but dialogue and a line dividing each scene. So the breathtaking achievement of actors Katherine Amadeo and Antonio Amadeo, and director Joseph Adler– for rarely has a director’s hand been so crucial – is inventing and investing so completely in the varied ways each scene is interpreted as it reappears during the evening.

In some cases, a snatch of a scene is repeated almost word for word (but not quite) with only the line readings changed to communicate a different subtext or emotional quality – none of which is dictated in the script.

And what is genuinely amazing — a word we use sparingly – is that the two actors switch in literally a second’s blackout from one emotional context to another with absolute believability, no matter how fraught the previous fragment was with a different color.

Payne’s play, which bowed in London in 2011 to acclaim and last season in New York, posits the evolution of a relationship between a British cosmologist and a beekeeper. But his concept is there are, at any one moment, an incalculable number of alternative scenarios being lived simultaneously with decisions made and not made, things said and not said. Time is beyond fluid before the audience as the scenes depict different outcomes and we see events as an omniscient God might — often out of chronological order, jumping back and forth like they do in Slaughterhouse Five and Dave Bowman’s morphing at the end of 2001: A Space Odyssey.

This conceit has been a staple of science fiction and comic books since the 1950s. But Payne spins it with a profound earnestness and a sense of cosmic splendor. There is no “road not taken” in his vision of the universe – and that’s one of its glories.

The married Amadeos have been central figures in the South Florida theater scene for well over a decade and a half as acclaimed actors, as co-founders of The Naked Stage troupe in Miami Shores and as the creators of the annual 24-Hour Theater Project. Adler was canny to wait until the married Amadeos were available in tandem to take on the project. Obviously, they have chemistry, but also an instinctive professional bond.

Katherine has long ago proven her skill at exposing the fragility of high strung characters (The Turn of the Screw, 4:40 Psychosis) and her Marianne is frequently laughing nervously as she negotiates the shoals of a nascent relationship. She has the showier, more emotional role, which means she has a tougher challenge in instantly abandoning one emotional state for another, but she nails it every single time.

Antonio, whose performance in last season’s Daniel’s Husband was universally acclaimed, has only a marginally easier time of it with this blue collar everyman. But his four completely different approaches to a crucial scene late in the show involving a monologue about bees proves that his range and imagination is unlimited. Both actors create characters — actually a universe of characters, and yet the same characters — who are attractive, likable but socially uncomfortable.

Again, no one should underestimate Adler’s essential hand in the steady pacing, fluid staging and in establishing the subtly different takes on the same basic scene. His ability to find these permutations contributes considerably to the sense that we are not watching Bill Murray perfecting his single life in Groundhog Day but the possibility that the universe is a hall of mirrors.

This offbeat undertaking is a bit out of GableStage’s usual bent for naturalism and Adler deserves credit for pushing the boundaries of his audience’s expectation in this 101st production opening GableStage’s 18th season.

But it reaffirms GableStage’s commitment to the deal inherent in great theater: The audience can only get the most from a piece of art when it is willing to participate, invest its heart and mind in the journey. But the rewards are great.