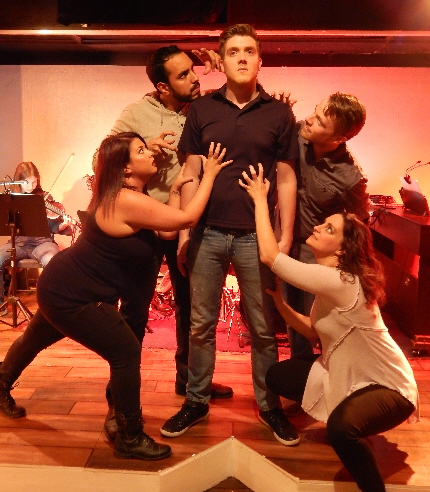 The individual songs in 35MM, a 2012 compilation by Ryan Scott Oliver, are so blithely disconnected that it is hard to perceive an overarching theme other than a kaleidoscope of snapshots of jangly urban life that you might find on someone’s Iphone.

What does unify Evening Star Productions’ ambitious undertaking is the affecting outpouring of angsty passion delivered by a quintet of singing actors and a rock steady band, directed by Rosalie Grant who elicited similarly pungent performances this summer with The Last Five Years.

The company of Sabrina Lynn Gore, Jordana Forrest, Steven Michael Kennedy, Eric O’Keefe and Elvin Negron depict the spectrum of human emotion with every vocal phrasing and every inch of body language as they invest themselves completely in every vignette.

Audiences will have varying reactions to Oliver’s music, which is studiously eclectic – edgy rock, bittersweet ballads, love songs, nightmarish anarchy, hill country folk music, even a modern riff on an a cappella church hymn. Some are melodic, some dissonant, sometimes both in the same number. Some are droll like “Caralee” about a male babysitter with an assignment from hell and “The Ballad of Sara Berry,” a wicked riff on a nasty prom queen. Some are heartfelt like “On Monday.”

The creative process was a collaboration between composer-lyricist Oliver and photographer Matthew Murphy. The two started as friends, became lovers and are now spouses. Oliver was inspired by some Murphy’s photos and began composing theater songs about the disparate collection. As the idea for a show coalesced, Murphy in turn reshot some pictures to better reflect the songs.

The result is what theater folks these days call a song cycle; a troupe of singers perform the songs in a gallery with Murphy’s photos on display. Think a pop/rock version of Mussorgsky-Ravel’s “Pictures at an Exhibition.”

A cynic would say that a song cycle is just a musical revue by artists too lazy and too full of themselves to come up with an overarching story or, at least, theme. Even Cats, God help us, had a flimsy excuse for a narrative arc. But over time, the art form has taken hold with some intriguing entries on its own terms, notably Jason Robert Brown’s Songs For A New World done by Actors Playhouse, and Benj Pasek-Justin Paul’s Edges, recently mounted by Slow Burn Theatre Company.

Perhaps the idea is just to sit back and let it wash over you. One song, “Why Must We Tell Them Why? (Think and You’ll Miss It!)” warns “It is what it is and it is what it’s got to be.”

To be fair, Oliver the lyricist effectively creates self-contained tales much of the time, like an anthology of short stories or character studies, mostly about 20-something protagonists reveling and writhing as they navigate the soul-abrading landscape of the 21st Century city life. One lyric talks about “creating art from pain.”

Several stories are about relationships and sex, including “Leave, Luanne,” a folkish ghost story about a Southern couple in which the victim of fatal spousal abuse gets her revenge.

An intriguing section starts out with a song “Make Me Happy (He and She)” played by Forrest and Negron, which depicts a raging couple who say the loveliest romantic sentiments with a razor-edged fury during a fight. It is followed by “The Seraph (The Sinner with his Savior) “in which a young man (O’Keefe) talks about his discovery of what intentionally sounds like soul-fulfilling faith only to discover that the object of his adoration is someone other than Jesus. Then the He and She couple return, this time crooning the same lyrics, but with genuine affection. Whether these mirror images are supposed to be the same couple having made up, two simultaneous sides of the same relationship or whatever is impossible to discern.

Similarly, the song “Cut You a Piece” tells of a deep abiding love (or friendship) that must find a way to survive when one of the participants dies and the other must go on living without them.

Vocally, only Gore seems flawless. The other four show strong full-throated singing chops much of the time that do justice to the material, but this is a tough score and they often fail to hit some notes, natural or discordant. This is strange because when they sing together in Oliver’s intricate five-part vocal orchestrations, every one of them sounds spot on – a gloriously powerful and unique sound. Most of the time they enunciate Oliver’s lyrics clearly, but on occasion the words get completely lost such as in the group number “Crazytown” and the introductory “Stop Time.”

The show can be staged very simply (it’s even been staged in front of music stands), but Grant has invested a good deal of movement into the piece, including having choreographer Alexandra Dow design silent dances to illustrate some of the stories being sung on the other side of the stage.

Band director Jason Buelow leads a changing line-up of musicians who on the night I saw it included Buelow on piano, Meredith Levin on violin, Ben Brown on acoustic and electric guitar, and Nicole George on drums.

35MM and this production require some effort from the audience to meet it more than halfway. It is, as they say, not for everyone’s taste. But it does represent an intriguing example of the current effort by young theater artists to find new ways to create their own brand of musical theater that speaks to them. In that, Evening Star’s 35MM is worth checking out.

A sample of the songs can be heard at http://ryanscottoliver.com/show/35mm/