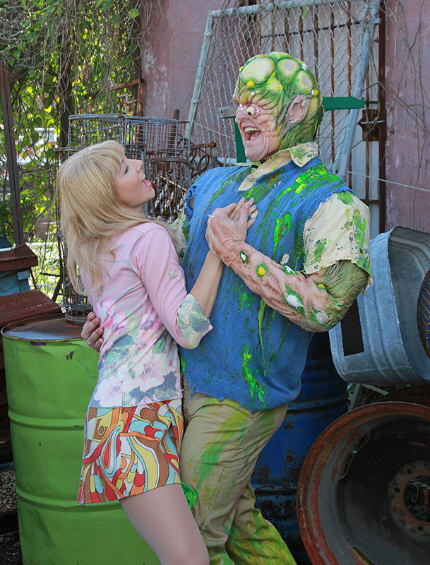 Somewhere under the green slime encrusted set of The Toxic Avenger at Actors Playhouse, a nuclear plant must be melting down all China Syndrome like. That might explain the raw power emanating from this hilarious hoot of a rock musical.

The daffy goofball satire from 2008 revels in, honors and mercilessly teases that comic-book, B-movie, sci-fi, dystopian, horror movie vibe that has grown exponentially over the past half-century-plus (can it be that long?) like something out of The Andromeda Strain.

This genre in musical theater has proliferated over the past two decades from its roots in 1973’s The Rocky Horror Show, 1982’s Little Shop of Horrors and 2001’s Urinetown the Musical and moving into such titles as Return of the Living Dead and Evil Dead: The Musical, not to mention the real horror of Spiderman: Turn Off The Dark. But many of the more recent crop have been amateurish, not just in style but execution.

Not so, Toxic Avenger. Although it tries not to brag about it, the show has a rousing score by former Bon Jovi-ite David Bryan, witty lyrics by Bryan and Joe DiPietro (I Love You, You’re Perfect, Now Change) and a surprisingly solid satirical script by DiPietro (who you may remember also wrote Over the River and Into The Woods).

Even better, this production, which bills itself as the first regional theater outing (if you don’t count Toronto, Houston or Hawaii), is helmed by the local master of comic staging David Arisco with dead-perfect musical direction from David Nagy. There’s also a top-notch band, fine visual and aural contributions from the Playhouse’s house artistic staff, and crucial costumes, props and prosthetic makeup pieces literally borrowed from the off-Broadway producer’s storage unit – including limbs that get ripped off characters before your eyes.

But what makes this delightfully over-the-top production triumph over the weaker parts of the material are the atomic, uninhibited performances that Arisco and Nagy have gotten from this cast of five belting rockers: the inimitable Clay Cartland (who turned into a slug in Arts Garage’s The Trouble With Doug) as the hero, Julie Kleiner as the heroine; Laura Hodos, Florida’s own Ethel Merman, as the villain; and Joshua Dobarganes and Dexter Carr as a dozen off-the-wall supernumeraries.

The plot centers on shy bespectacled nerd Melvin Ferd the Third (Cartland), an environmental scientist trying to clean up the toxic wasteland known to the rest of us as northern New Jersey. The corrupt mayor of Tromaville, Babs Belgoody (Hodos), has happily accepted the noxious poisons from across the river in Manhattan, understandable since she is the secret owner of the disposal company, The Good Earth. The group sings of their beloved town: “If the pollution doesn’t get you, the aroma will.”

Melvin is in love with Sarah (Kleiner), the blond blind librarian unwittingly harboring secret documents proving the mayor’s calumny. But when Melvin accuses Babs, she sics ne’er-do-well football players (Dobaganes and Carr) on him. They “accidentally” drop him in a large vat of radioactive waste.

As they attack Sarah, he emerges with broad shoulders, mighty muscles, superhuman strength and covered head to foot with atrocious-smelling boils, carbuncles, bleeding pustules, a left eye hanging out of its socket and a face that would make Lon Chaney in Phantom of the Opera look like a GQ model.

He rescues Sarah from the attackers by dismembering them, but she can’t see the carnage nor his obscene appearance, so she gives him her adoring love. He does have to lie to her about killing anyone because, as she says, “Violence is always wrong,” although she adds guiltily “but it’s sometimes entertaining.”

And from there, he tries to cement his first real relationship while Babs tries to block his enhanced crusade to expose her and rid Jersey of toxic waste.

It’s a stepchild of the Spiderman movies and Rocky Horror if they had been written by Ralph Nader and Rachel Carson, except that it not only allows itself to be silly, but silliness is the stock in trade that it joyfully embraces. The whole evening is raucous, loud, profane and irreverent.

We keep saying how inventive Arisco is in his comic direction and how bottomless his bags of tricks must be. To see what we’re talking about, check out this production with its perpetual motion staging stopping only for some classic bits of comedy business.

Arisco has cast the show perfectly. Cartland, once again, proves to be one of the best musical performers in the region who combines an inventive comic mind with a sub rosa skill with a song. Even encased in the considerable prosthetic makeup, his voice and body language convey his character’s conflicted emotions.

Kleiner perfectly shuttles among Sarah’s disparate sides: naïve yet knowingly sensual, open-hearted yet smart enough to guard her self – a kind of street-smart cheerleader, a cross between Buffy and Willow. She can drop her cartoony girlish ingénue voice into a basement belt.

Dobargnes and Carr may seem like secondary foot soldiers, but in fact, they may be busier than the leads as they go off-stage for only a minute or even seconds to change from nitwit varsity bullies to mobsters to old ladies to spangle-garbed girl group back-up singers. Each has a fine strong voice on display when they get a solo number.

Leaving perhaps the best for last is Hodos who has a brassy belt that whiplashes the audiences while her eyes blaze and her lips form a voracious grin. In one supremely silly scene, the actress is tasked with a confrontation number between Babs and Melvin’s gray-haired mom. At a hair salon, the mayor has a great line (or is it the mother), “She’s coming here? I can’t be seen with her!” and then gives a tiny knowing breaking-the-fourth-wall smile. But in fact, the actress then proceeds to perform a duet with herself flipping back and forth in and out of curtains until she ends up doing a Jekyll-and-Hyde routine.

The show is once again being played in the upstairs theater on the kind of deep-thrust stage that was used in last season’s Murder Ballad. The configuration makes the audience feel like they are surrounded by the action when it’s actually precisely the reverse.

The gloriously noxious set was designed from a technical angle by Gene Seyffer (he has solved a dozen behind-the-scenes challenges such as allowing Melvin to transform into the Avenger is less than two minutes). The decrepit look of the scenery that makes you want to disinfect your hands afterwards is the work of Jodi Dellaventura. Their work is enhanced by lighting designer Eric Nelson and sound designer Shaun Mitchell who pumps out the band and voices at tsunami level.

The kick-out-the-jams band is led by Nagy with Martha Spangler on bass, Julie Jacobs on drums-percussion, Sandy Poltrack on guitar and Andrea Gilbert providing the essential sax riffs.

A shout out is due the uncredited crew of stagehands and dressers backstage who clearly are working as hard as the performers on stage. Among their accomplishments are the smooth costume changes they enable for Dobargnes and Carr who do not stay in the same character or costume for very long. Similarly, production stage manager Carl Waisanen should be paid time-and-a-half for all the cues he’s handling.

The Toxic Avenger property has had an interesting ride. It began as a 1984 film from infamous horror-gore producer Troma Films and gave rise to at least three sequels, a comic book, a novelization, a computer animation series and several other forms.

The musical was first produced in 2008 at the George Street Playhouse in New Jersey where it was a record-breaking success. It moved to off-Broadway in 2008, winning awards and a cult following. That powered full-fledged productions including a major one in Canada while the producers struggled in vain for years to get it a Broadway berth. That kept the show from being licensed for regional and community productions. The producers, who apparently have not given up, finally released the rights and Actors Playhouse says it’s the first regional theater to produce the show.

Several horror-influenced shows have dotted the October calendar so far, but with The Toxic Avenger the trick and treat season truly has arrived.

The Toxic Avenger plays through Nov. 8 at the Actors’ Playhouse at the Miracle Theatre, 280 Miracle Mile, Coral Gables. Performances 8 p.m. Wednesday-Saturday, 3 p.m. Sunday, 2 p.m. Oct. 21 only. Running time 2 hours with one intermission. Tickets $53 Friday-Saturday, $45 other shows. The theater offers a 10 percent senior discount rate the day of performance and $15 student rush tickets 15 minutes prior to curtain with identification.  Visit actorsplayhouse.org or call (305) 441-4181.