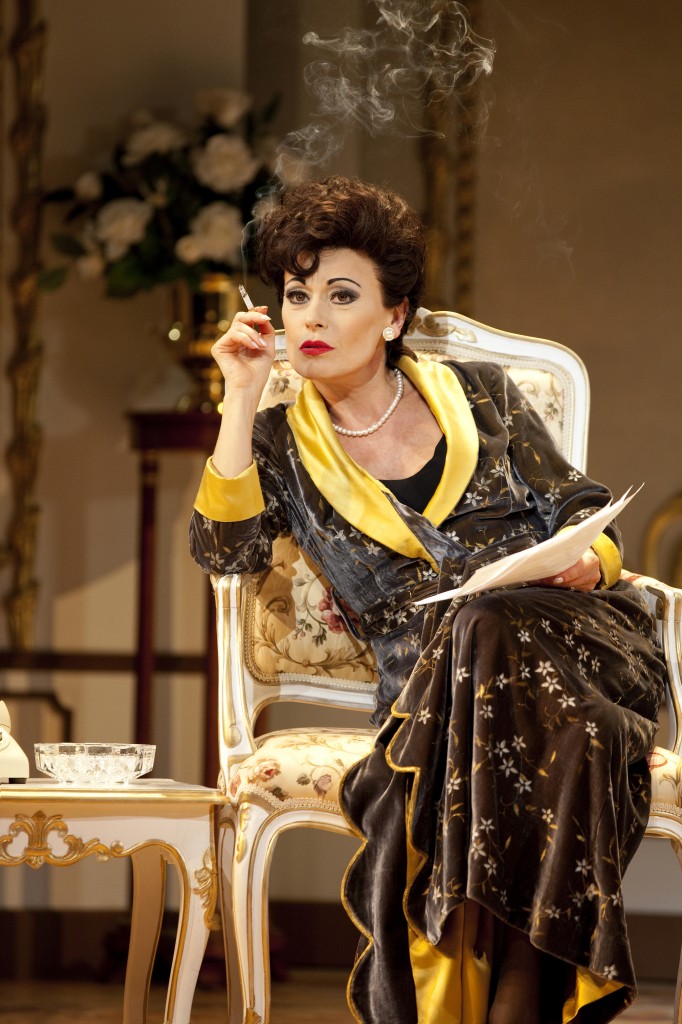 Welcome to our semi-annual scouting trip for shows likely to appear in South Florida in a local production or a national tour — or shows you should make a point of seeing/avoiding on your next trip. Among them:  Leap of Faith (starring Miami’s Raul Esparza), Other Desert Cities (announced for Actors Playhouse next season), Peter and the Starcatcher (based on books by the Herald’s Dave Barry and Ridley Pearson), Once, Nice Work If You Can Get It, The Columnist, End of the Rainbow, Venus in Fur and a revival of A Streetcar Named Desire (with an African-American cast). See links at the bottom of each story for previous reviews in the series.

Today’s Review: End of the Rainbow

Anyone whose throat doesn’t tighten up a little at a recording of Judy Garland singing “Over the Rainbow,”  The Trolley Song,” “The Man That Got Away” or  “Have Yourself A Merry Little Christmas” needs to put a couple of fingers on the carotid artery and check for a pulse.

That said, Garland was the ultimate in high-maintenance for anyone who loved her or was charged with keeping her away from indiscriminate combinations of pills ands booze in hopes of (a) saving her life and/or (b) getting her to a theater to perform.

End of the Rainbow is an unsparing, but somewhat compassionate portrait of her final months as she lurches through a five-week gig at London’s Talk of the Town that she needs to pay bills rivaling the national debt. The play itself wears the audience down with the endless, repetitive swirls of Garland’s death spiral

This undistinguished entry in the Garland sweepstakes has precisely one virtue: Tracie Bennett. Her Tony-nominated portrayal of Garland is a no-asterisks acting triumph. This is no drag queen imitation. In fact, you have to blur your eyes a little and not listen all that critically to summon up the ghost. But Bennett delivers the dramatic goods, credibly displaying facet after facet of the diva’s ever-churning personality even when the behavior would seem dubious in anyone else.

And then there’s her singing. Bennett isn’t mimicking Garland or even attempting to be a Memorex facsimile. But she does have a fine clarion voice of her own and she has mastered Garland’s smoky timber enough that you feel like you’re listening to a tribute rather than a cabaret impressionist’s act. She also nails those iconic stances such as standing in silhouette, spinal column bent like a dancer in a dip, head thrown back, one arm on her waist, the other holding the microphone downward towards her mouth. Backed by a fine live band, her renditions of “The Man That Got Away” and, three guesses what the finale was, are moving.

On the other hand, the script by Peter Quilter is a numbing celebrity riff on Groundhog Day. IHe breaks no new ground whatsoever, offers no new insights as he alternates scenes of her on a tear in an elegant Ritz Hotel suite and performing her greatest hits on the nightclub stage. His primary skill is recreating her self-deprecating wit, layering on retorts, rejoinders and one-liners for Garland, such as, “It’s hard enough entertaining; you want me to be polite, too?”

This show is precisely what you expect it to be, which may be the validating reinforcement some are looking for. It’s undeniably a voyeuristic experience sitting in the bleachers watching the proverbial train wreck in slow motion. At this point , Garland is engaged to a young studly manager Mickey Deans (Tom Pelphrey) who is struggling to keep his star clean and sober – a task akin to holding back a tsunami by waving it away with your arms. While he may have Garland’s best interests at heart, Deans just comes across as a jerk and there never seems to be enough genuine affection in him to make his loyalty seem like anything more than opportunism. I’m not sure that was the goal.

The third leg of the triangle is her accompanist and musical director played by the usually fine Michael Cumpsty (inexplicably nominated here for a Tony), trapped in an embarrassingly stereotyped role as a decidedly fey homosexual. The only credible moment is when he tries to persuade Garland to run away with him to his Brighton home and “marry” him. His genuine affection and yearning to rescue Judy the  person, not the icon, is affecting.

In one of Quilters’ conceits, both men revere her and both are bitchily jealous of the other. The manager accuses the pianist of being one of those devotees who enabled Garland’s self-immolation by celebrating, encouraging and wallowing in her pain. The pianist accuses the manager of being one of those users who will not stick around for the long run.

But it’s easy to get real, real tired of watching her backslide, promise to be good, backslide, recant, over and over, abuse, seduce and compromise people of good will until they capitulate. It wasn’t harrowing for the audience so much as eroding.

Yet Bennett is fascinating to watch as her diva grows ever more outrageous in her self-pity, her manipulation and her search-in-vain for enough love to fill that black hole in her soul. Her recollections of the not-as-bad ol’ days may be clear, but this Judy can’t remember what someone said to her 10 seconds ago. One of Quilter’s better lines (I may not have it word for word) was, “It’s terrible to know what you were capable of… and know you’ll never achieve it.”

Bennett and the director Terry Johnson are honest enough to portray Garland at the end of her career when she did not have the singing chops that she once had. In performance, this Garland slurs her words, misses notes, even forgets lyrics during her performance. There’s an inventive bit of business as she gets tangled up in her microphone cord on stage.

What’s missing is any sense of what made her beloved or even an icon. This out-of-control mess in a Kabuki mask of makeup nearly makes you want to call Dr. Kevorkian to put her (and us) out of her misery.

If you feel compelled to see this, you’ll have to visit Manhattan because this isn’t coming to the Broward Stage Door any time soon.

A side note: We haven’t been in the Belasco Theatre since its renovation. If you haven’t either, you’ll be stunned by the 11-month $18 million overhaul that has turned one of most threadbare dilapidated spaces off Times Square into one of the loveliest, complete with ornate wood paneling and Tiffany glass skylights.