“Time Stands Still” Is Fodder For Introspection As Drama Unfolds 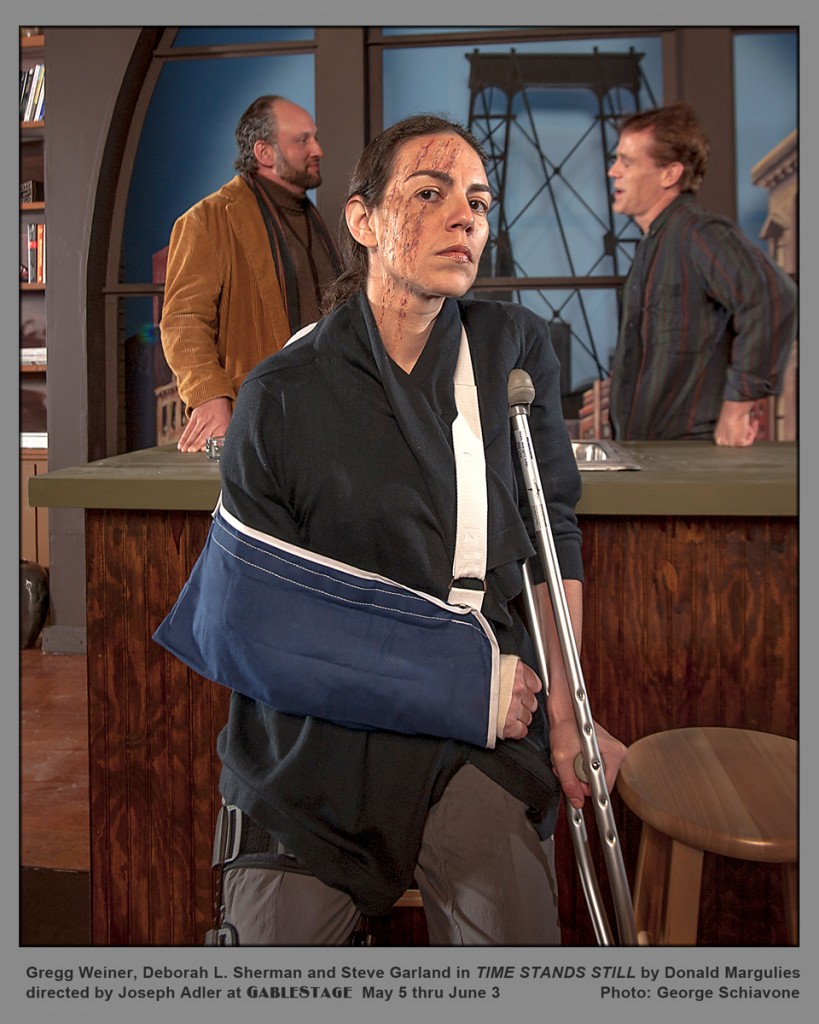 The irony of the play Time Stands Still is that, in fact, time doesn’t stand still.  It’s the inability of people to change with it that constitutes one of several tragedies in Donald Margulies’ drama enjoying a solid production at GableStage.

Forgive the inflexibility of the lovers at the story’s core. They are foreign correspondents whose work in war-torn and famine-plagued hotspots is creating frozen shards of time so that we can examine them and our conscience at our leisure.

But recent near death experiences have driven photojournalist Sarah and writer James in different directions during a respite in the saner, safer world of New York City.

Director Joe Adler and a fine quartet of actors deliver such a skilled naturalistic portrait of two couples that you occasionally forget you are watching theater and feel a little uncomfortable eavesdropping on private moments.

In truth, this is not a thrilling or enthralling production; it’s one that keeps you thinking long after the lights come back up about whether we are jettisoning our responsibility as human beings to, first, feel something and, second, act on it. Adler, Margulies and Company have provided rich fodder for protracted post-show debates.

Lovers James and Sarah grapple with the contradictory paradigm of journalism: being knee deep in the viscera of tragedy while keeping it at an emotional arm’s length. The trick has always been preserving your humanity when you get too proficient at putting your compassion in a lockbox during crises. Sometimes you forget where you put the key when it’s time to come home and resume “a real life.”

Sarah (Deborah L. Sherman) has been scarred and crippled by a roadside bomb that killed her assistant. James (Steve Garland) was back in the United States at the time undergoing psychiatric counseling after being traumatized by yet one more horrific incident.

“We are the Sid and Nancy of journalism,” James says.

But these near-death experiences have affected them differently. Sarah finds the meaning of her life in a sacred calling of spotlighting the horror for the world to see. She can’t wait to go back. “Without us, who would know? Who would care?” she says.

Sarah reacts with wittily sardonic and sarcastic comments when faced with the comparative banalities of everyday life. Exhibit one is the almost clichéd mid-life crisis relationship between their long-time friend Richard (Gregg Weiner), a photo editor who often commissions their work, and his newest girlfriend, the much younger Mandy (Betsy Graver), an event planner who is seemingly far shallower.

Perhaps spurred by his friend’s solidifying relationship, James proposes the couple formalize their own eight-year relationship by getting married, a move that unnerves Sarah. James not only can unpack his compassion, he needs to. And he wants to do it with Sarah. She responds, “You’re changing the rules.” To which, James answers, “No, the playing field.” And the conflict begins.

Margulies, Graver and Adler craftily set up Mandy as an outwardly naive airhead. The triviality of her life and its priorities invests the journalists’ vibrant experiences with an aura of moral and intellectual superiority.

But slowly, all three make us see that Mandy is first, a stand-in for the people the journalists are purportedly trying to serve, and second, a far better balanced human being. When Mandy challenges why Sarah does not intervene when recording these horrors, Sarah responds, “We’re there to capture the truth, not change it.” But that rings hollow when Mandy compassionately and genuinely wishes the couple could see some of the joy in the world as well as the horror – precisely what Sarah can’t do and what James yearns to be able to do.

Speaking as a former police reporter back in the day when local journalists got close to the physical gore and emotional agony, I can endorse that Sherman and Margulies have nailed that mesh of inhuman detachment and altruistic motivation of wanting to spur social conscience and action.

You suspect that Margulies, author of the Pulitzer-winning Dinner With Friends, is targeting a far larger group. This mechanism for coping — once an oddity reserved for police officers, emergency room workers and journalists – is now employed by much of society at large for dealing with less profound but pervasive tragedies that sandpaper if not scar our souls.

This production spotlights three of Adler’s strengths: eliciting multi-layered performances from actors, impeccable pacing and small bits of staging. The irreconcilable differences are beautifully illustrated in a wordless moment when the lovers begin a perfunctory embrace. It starts out as a genuine but brief clinch. But James suddenly clasps her tightly to his chest. Sarah loosens her grip and backs away.

Sherman’s performance just adds more luster to two years of outstanding work. Sherman’s toolbox includes large expressive eyes and a wide mouth, both capable of communicating suppressed glee or repressed pain. She can unleash operatic emotion as she did in her Carbonell-winning turn as the bipolar wife in Mosaic’s Side Effects, but here she is appropriately buttoned-down, using Sarah’s intelligence to internally and privately fence with her demons. But Sherman’s Sarah is not dead inside. She shows playful if wary affection in her relations with James and she trusts him enough to recount a nightmarish encounter in the field that shows she questions what she does.

This is Garland’s local debut, but he rewards the casting with a sensitive portrayal of a decent person who just cannot deal with the carnage and cruelty any longer. More than any of the others, Garland is so natural, so absent actor’s contrivances that he seems like your neighbor. His angst and his hunger for a normal life is almost something physical.

Weiner inhabits the skin of the 21st Century pragmatist who fights the good fight for journalism but knows when to compromise.

Arguably, Graver has the toughest role and she just knocks it out of the ballpark. A lesser actress would be unable to keep Mandy from becoming a stereotypical ditz. But Graver achieves exactly what Margulies and Adler wanted: a three-dimensional character who may not have the sophistication and life experiences of the other three, but who has a warmth and humanity that the others lack.

Lyle Baskin once again provides a convincing environment, this time James and Sarah’s Brooklyn apartment. But the highest praise goes to Jeff Quinn’s evocative lighting. He creates shifting moods with different lighting schemes for the same apartment, including subtly changes in the cityscape outside the window. Much as he did for GableStage’s Fifty Words, Quinn also creates different patterns by having characters turn on lights in different parts of the apartment as they move about. About the only half-measure in the production is the unimpressive makeup on Sherman’s face indicating her six-week-old scars from the bomb blast; we’re spoiled by what movie makeup departments can wreak with larger budgets and more sophisticated resources.

In total, Time Stands Still won’t make you cry or transport you, but it is one of those evenings that make you glad you’ve seen it with other people so you can talk about what it meant on the drive home.