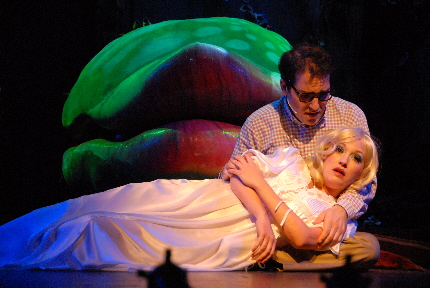 Okay, everybody dies and the world is taken over by human-eating aliens, but Slow Burn Theatre Company’s Little Shop of Horrors delivers a happy ending to its five-year partnership with West Boca Community High School.

The once-fledgling, now highly-acclaimed troupe got its first break with low-cost space from the school on the edge of the Everglades in February 2010 when it mounted Bat Boy. Beginning next fall, it will operate out of the slightly smaller but plusher and more lushly equipped Amaturo Theatre at the Broward Center for the Performing Arts in Fort Lauderdale.

But to say goodbye, a grateful Slow Burn has delivered a kick-butt production of the not-so-cult-anymore musical hoot. The satire has been on the bucket list of several people in the company for years including director/choreographer Patrick Fitzwater. Their enthusiasm pours off the stage as evidenced by Mike Westrich’s near perfect rendition of the Everynebbish protagonist Seymour Krelborn.

But we ought to put this next in boldface: The don’t-miss aspect is indisputably the powerhouse and poignant performance of Amy Miller Brennan as the battered wistful heroine Audrey.

Every once in a cobalt blue moon, for those of us who see a lot of the same shows over and over, Florida regional theater provides a platform for what are arguably the most memorable interpretations of a role or a song such as Kate Shindle doing the title number in Cabaret or Vicki Lewis in Hello Dolly! both at the Maltz Jupiter Theatre.

Well, Brennan is the definitive Audrey seen down here or arguably anywhere else, including Ellen Greene, God bless her. Brennan’s blast-out-the-back-wall belting on “Suddenly Seymour” outshines any version on stage, film or recording. And her rendition of “Somewhere That’s Green” is a master-class melding vocal chops and musical acting. She, with Fitzwater’s guidance, finds that perfect mixture of risible farce and touching pathos of someone who yearns so profoundly for such a modest dream. Audrey is a ditsy pneumatic Monroe blonde cartoon, but Brennan infuses her with the crucial vulnerability and lovability as she says lines like “I have a past” with dead seriousness when there is nothing that she could have done to equal the shame she conveys. It adds another highlight to her career as one of the region’s most skilled musical theater performers in recent years as seen as Maureen in Rent, Florence in Chess and Judy/Ginger in Ruthless.

The 1982 show is based on Roger Corman’s low-budget 1960 black-and-white cult classic that spoofed the cheesy horror movies of the previous decade. The musical postulates that Seymour is a schlubby nerd working as a downtrodden assistant in a Skid Row flower shop owned by Mr. Mushnik (Slowburn cofounder Matthew Korinko) and alongside co-worker Audrey whom he secretly adores.

He discovers a strange flytrap-looking plant during a total eclipse, christens it Audrey II and brings it back to the shop. The plant has magical powers that improves business at the shop and brings national fame to Seymour. But the plant needs fresh blood to thrive. Seduced by his growing success, Seymour starts feeding it his own blood, but that’s not enough for the growing plant.

That’s okay. Audrey has a sadistically abusive motorcycle-jacket wearing boyfriend (hilariously played by Shane Tanner). He’d make good plant food, right? And it goes on from there, a delightfully snarky commentary on the Americans’ limitless greed for fame and fortune.

This improbable musical version ran off-Broadway for more than five years thanks in large part to Alan Menken’s music and Howard Ashman’s lyrics and book. Not until Hairspray in 2002 would there be as faithful and wicked a musical satirical celebration of the 1960s. Menken’s peppy score closely mirrors doo-wop, rock n’ roll and Motown; Ashman’s lyrics were supremely witty — worthy of a latter-day if plebian Cole Porter. If it had been Tony-eligible, it would have given Dreamgirls tough competition. Since then it has been a staple of high schools, college, community theaters and regional companies.

The cast is deep in the right groove including Korinko’s opportunistic Mushnik, Geoffrey Short as the basement bass voice of the plant, and Nicole Dikun, Christina Alexander and Elisa Dannielle as the doo-wop Greek chorus urchins named Ronette, Crystal and Chiffon. Tanner is hilarious as the ultimate bad boy Brylcreamed boyfriend – plus eight other parts including Life magazine maven Clare Boothe Luce. A special shout out is due to Rick Pena who designed the costumes, built the smaller iterations of Audrey II and operated all versions of the man-eating plant.

As usual, Fitzwater does a faultless job shaping this production. His choreography skills are on display in the girl group moves. But his imagination kicks in big time when Mushnik does a seductive tango with Seymour to bond with his new cash cow – because the steps are mostly drawn from Jewish folk dances and road shows of Fiddler on the Roof.

The fanciful depiction of a Skid Row, complete with a weirdly appropriate Van Gogh surreal sky, was designed by Sean McClelland. The ever-changing lighting was designed by Lance Blank, which must have kept Stage Manager Britni Serrano busy calling cues.

About the only flaw came from the sound system. High school auditoriums are not built with sonic qualities as a priority and this facet has plagued Slow Burn productions from the very beginning. Slow Burn’s staff has gotten better and better at minimizing the problems, but this time the girl group, which has some of the best lyrics in the show, sounded muddy and garbled.

Nerd Notes: Little Shop’s only Broadway run (which tried out at Actors Playhouse in Coral Gables) died quickly in 2003. Muppet alumni Frank Oz even made it into a movie in 1986 with Rick Moranis, Steve Martin and original leading lady Ellen Greene that unfortunately tacked on a happy ending after audience test marketing. The Encores staged concert series in New York City will mount it again next month with Greene and Jake Gyllenhall.