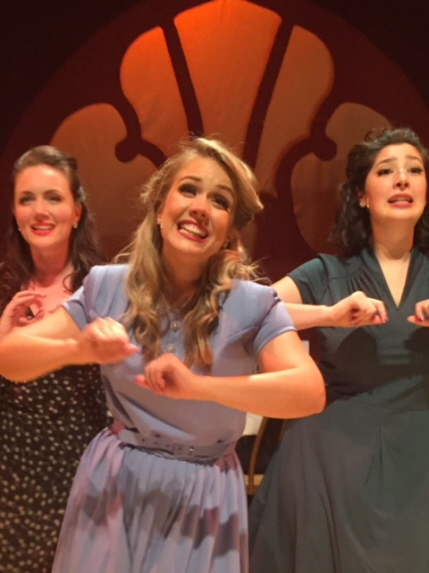 Sarah Ashley, Molly Anne Ross and Malia Nicolini as The Andrews Sisters in Sisters of Swing / Photo by Dan Kelley

Harmony. When it’s sung well, a warm visceral sense of well-being and balance missing from much of human interaction just envelops the lucky listeners.

The three actresses impersonating The Andrews Sisters in Broward Stage Door’s jukebox bio-musical Sisters of Swing don’t especially look like the real-life trio and when they sing solos, they don’t sound precisely like inimitable tones of Maxene, LaVerne or Patty.

But when Sara Ashley, Malia Nicolini and Molly Ann Ross weave those voices together into a seamless single whole, they sound as much like the original songbirds as you can hope for. Not only have they nailed the sisters’ buttermilk smooth sound, but they are proficient most of the time duplicating the tricky lightning-quick vocal syncopations.

This production and probably the property itself lacks much electricity, due in part to a lame script; it’s more a pleasant evening stroll down good ol’ Memory Lane. But it should satisfy patrons whose childhood and teenage years played out to this music.

For anyone under retirement age, The Andrews Sisters were the Destiny’s Child or Supremes of the 1930s and ‘40s – but arguably much bigger. Starting in vaudeville and inspired by the now forgotten Boswell Sisters, the trio honed a powerful yet superbly blended sound that would be copied by girl groups for decades to come. They paid their dues touring with big bands. Their recordings for Decca Records reportedly outsold anyone else’s in the 1940s except Bing Crosby’s. They cemented their popularity with uncounted appearances on live radio and 17 films. Their iconic status was achieved by touring tirelessly during and after World War II, entertaining the troops at military bases and hospitals around the world.

Teenagers adored them for embracing the then-cutting edge of pop, swing music, and the precursor to R&B, boogie-woogie infused with some scat. Personal struggles caused them to break up for several years, then return in the mid-1950s for another decade-long run. Their recognition factor spiked in 1972-73 when Bette Midler and her Harlettes had a top 40 AM radio hit with their signature “Boogie Woogie Bugle Boy,” and when Patty and LaVerne were featured live in a nostalgic musical Over Here! a year later.

This 2002 musical tracks their life story with a perfunctory book by Beth Gilleland and Bob Beverage that director Dan Kelley gamely does everything he can to enliven. It does allow the actresses a few introspective soliloquies that shoot a welcome shard of reality through the cotton candy. And it ends with a warts-and-all acknowledgement that their vocal harmony died as personal animosities and family deaths caused the group to disintegrate into recriminations and a lawsuit. But such shows struggling vainly to be more than a revue illustrate just how tough that challenge can be; Rick Elice and Marshall Brickman’s brilliant book for Jersey Boys was a lonely aberration.

But fortunately, that’s not what Stage Door’s patrons came for. They get their money’s worth as the three actresses deliver the standards “Bei Muir Bist Do Schon,” “Ac-cent-tchu-ate The Positive,” “Don’t Sit Under the Apple Tree (With Anyone Else But Me),’ “I’ll Be With You In Apple Blossom Time” and, of course, “Boogie Woogie Bugle Boy.”

They miss a few notes in “Bugle Boy” but amazingly few and the only clunker is, we’re not making this up, “The Woody Woodpecker Song,” which sounds as if no one has been on YouTube to listen to the original.

The production has two unsung heroes. Those incredible harmonies were put together by musical director Michael Larsen. He was supposed to play piano during the run but took sick early this week. Stepping in was the dependable David Nagy who barely missed a beat to lead the lively onstage combo with Martha Spangler on bass and Julie Jacobs on drums.

Brad Rakushin also performs in a wide range of parts from Maxene’s husband Lou Levy who bristled at their Greek father’s anti-Semitism, to Carmen Miranda doing the rhumba in full drag.