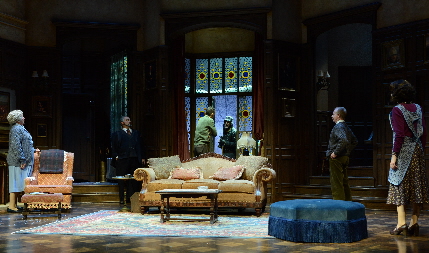 The snowbound usual suspects greet the unconventional arrival of Sgt. Trotter in The Maltz Jupiter Theatre’s The Mousetrap / Photos by Alicia Donelan

Spoiler alerts: Rosebud is a sled. Wizard of Oz? All a dream. Sixth Sense? He’s dead.

The Mousetrap? No, no, no. We’re guessing a million people have seen the longest still-running play in history, no asterisks, and we are not going to be the ones to spoil the denouement of this classic Agatha Christie puzzle, a mystery thriller in which no one is who they seem.

The season opener at the Maltz Jupiter Theatre is indeed a hoary old chestnut chock full of clichés, stereotypes and tropes which weren’t even new when it bowed in 1952. But director Peter Amster and his cast wisely don’t try to fight it or update it. Instead they embrace it with gusto and with hardly a post-modern wink other than playing up everyone’s suspicious facets with a gleeful melodramatic flair that is usually, but not always under control.

While no one breaks character or fails to play the seriousness of the situation, you can easily imagine the fun they are having saying portentous and foreboding lines that virtually wrench the spotlight of suspicion upon them. As is Christie’s wont, anyone could be the murderer, everyone had motive and opportunity, and many characters’ pasts interlock, even though they all seem to have come together by chance.

As a result, some stick-in-the-mud audience members are going to find the whole thing silly, creaky and hackneyed in 2015 because this was the blueprint for so much that has come since. But they’d be depriving themselves of savoring the pleasures of a playful period piece that inhales the fustiness down to the scream in the dark and the venerable wood-paneled living room.

The secret is for the audience to revel in it on its own terms and enjoy the unlikely scenario in which a group of supposed strangers, all with secrets to hide, end up in an isolated cut-off locale and in imminent peril of murder. Don’t feel you’re too sophisticated for this, Come on, what’s the likelihood that Luke and Leia are siblings separated at birth or that Jennifer what’s-her-name is going to survive The Hunger Games?

Besides, the play is shot through with streaks of wry dark humor that Christie often injected in her work, something Amster and company make the most of. Plus, because this is being played more or less with a straight face, it reminds us how Christie was a serious devotee of exploring the psychological underpinnings of crime, its motivations and its damaging after-affects lasting decades. Those familiar with Christie’s sardonic view of humanity will see a more sophisticated view than they remember of the fragility of trust in interpersonal relationships.

The only nods to the 21st Century is that the “masculine” woman character is far more mannish and the “peculiar” young man is way over-the-top Project Runway gay than a director would have dared depict in in 1952.

For the uninitiated, The Mousetrap is set in a country house about 30 miles from London which has just been opened this week as a B&B by the amiable attractive young couple Mollie (Katherine Amadeo) and Giles (Eric Parks). A blizzard is settling in as the first guests with reservations arrive one by one.

The first is the aforementioned Christopher Wren (Richard Iverson) who is jocular, effervescent, uninhibited and as gay as a goose, as Christie might have said. With curly ringlets, the outré young man who claims to be an architect in training (his name was his parents’ hope of encouraging him), immediately begins inspecting the furniture to determine if any might be antiques. He and Mollie hit it off, and Giles is put off by their bonding.

Next to arrive are the snooty and impossible-to-satisfy grande dame Mrs. Boyle (Barbara Bradshaw) alongside the tweedy Major Metcalf (Barry Tarallo who stepped in for the original actor ailing in rehearsals). Next is the mannish Miss Casewell (Gail Rastorfer) who pointedly sidesteps any inquiries into her life.

The last guest had not made a reservation: the Italianate Mr. Paravicini (Roland Rusinek cheerfully channeling Victor Buono), a portly well-dressed man who claims to have turned over his Rolls Royce in a nearby snowdrift. Visually, he would seem to be entering early senior status, but he is wearing old age makeup and moves quite smoothly. It’s like a game of Clue come to life minus Tim Curry.

Most are unnerved by the radio reports of a murder of an older lady in London and a suspect at large, all except Paravicini, who indulges in gallows humor and jovially utters ominous remarks intentionally raising the possibility that he is the killer as he puffs cigar smoke rings in the air.

Finally, as the snow shuts the house off from the village and the phone goes dead, handsome young Sgt. Trotter arrives on skis (Christian Pedersen) with the news that a note at the London murder scene indicates that the killer may be among the guests or owners. De rigeur, he questions each person, all of whom have secrets and backstories they are loathe to reveal, until one is, surprise, surprise, murdered.

If you haven’t seen it or read it, the crucial plot twists still have the ability to elicit gasps from some audience members although observers who have watched a few hundred Law & Order episodes will see the now familiar pattern coming. But flabbergasting the audience is not the point of the Maltz revivial. 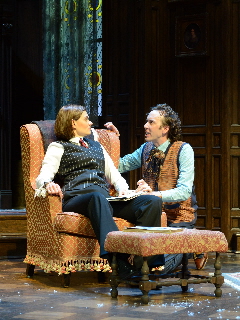 The entire cast throws itself deep into the whirlpool with zest, but Amadeo gives the play a grounded center, even as she weeps and shudders in terror. Rusinek chews the scenery as if it was a pate de foie gras, the hilarious Iverson gobbles up whatever Rusinek has left over, and Bradshaw gives one of her patented doyenne performances including a hilarious look of shocked disapproval when Mollie gauchely rolls a vacuum cleaner through the living room en route to another task. Each has an appropriate but diverse accent and demeanor depicting the wide class system deteriorating but still in place post-war.

Amster (The Maltz’s The 39 Steps with Pedersen) admirably sets the consistent tone and keeps the machinery moving even when there are scenes with no dialogue.

It’s no surprise that the Maltz, which has a well-earned reputation for its creative team, has invested heavily in the verisimilitude of the essential atmosphere. Tracy Dorman provides note-perfect period costumes. Thomas Hase’s lighting reflects the shifting time of day, the bright white winter light of the outside invading the dark living room when the front door is opened, and double shadows on the wall to underscore the duality of each person’s inner nature. Marty Mets’ dead-on soundscape ranges from the storm outside to incidental music of a moody take on the plot-centric children’s tune “Three Blind Mice.”

Most obvious strength is the detailed atmospheric set designed by Michael Schweikardt and masterfully painted by Michael Amico. The manor house living room is that post-Victorian featuring copious oak wood paneling, tall stained glass windows with snow already piling up in its lead strips, well-worn but tasteful furniture, generic oil paintings, even a proscenium of fluted wood. The attention to detail extends to the foyer drapery blowing violently when the front door is opened to the storm.

Geek Corner: For the records, work was first written as a radio play for the Royal Family entitled Three Blind Mice and then turned into a short story. The stage version began pre-London tour in October 1952 and then opened in the West End in November 1952. Although it moved to another theater mid-run, the tourist-popular work racked up 25,000 performances by 2012. Christie, who initially gave the royalties to a relative, required that state that no film version can be made and only one other professional product can be licensed each year in Great Britain until the West End show has been closed for at least six months. But school and community theater rights have made it a world-wide phenomenon.

Sure, the work seems a bit cartoonish at times; you expect Paravincini to twirl his moustache at any moment. But it’s a lark in which Christie doesn’t cheat you with crucial undisclosed pieces of her Rubik’s cube.

All, right, we’ll give you one clue: The butler didn’t do it.

Well, because there’s no butler.

The Mousetrap runs through Nov. 8 at the Maltz Jupiter Theatre, 1001 E. Indiantown Road in Jupiter. Performances at 7:30 p.m. Tuesday-Friday, 8 p.m. Saturday, 2 p.m. Wednesday, Saturday and Sunday with exceptions. Running time: 2 hours 20 minutes including one intermission. Tickets are $5-$84, available by calling (561) 575-2223 or visit jupitertheatre.org. 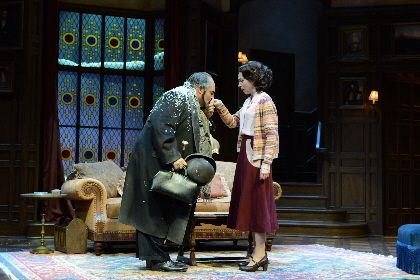