Swinging On A Star Indeed Swings At Riverside Theatre 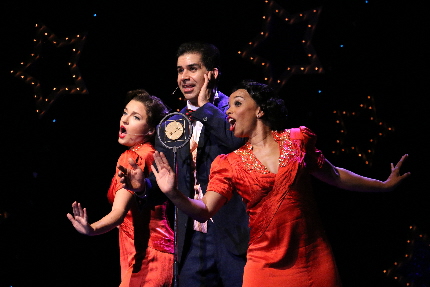 VERO BEACH — Good songs tell compelling stories. And after seeing Riverside Theatre’s stylish, smart and vivacious production of Swinging on a Star, you’ll think no one did it better than Johnny Burke.

A musical revue written by South Florida director-playwright Michael Leeds, it opened on Broadway in 1995 where it was choreographed by Kathleen Marshall and ran about three months. The Riverside production features seven talented professional performers who give a great “pop” of life and substance to the songs.

You’re not just hearing the music, but the emotion behind the songs. In the hands of this wonderful cast, each song becomes a vignette of sorts, filled with stirring emotion and character framed in memorable melodies and unforgettable lyrics.

And wow, is there a lot of music in this two-act revue – 41 songs, in fact, with most of them getting a fully realized production.

Directed and choreographed with smooth perfection by DJ Salisbury and designed with sleek sophistication by Allen D. Cornell, this polished production draws you in immediately.

Set beneath a series of beautifully wrought arches festooned with shining stars, the show begins with a gleaming platform holding six musicians moving forward, as though floating on a dream.

Resembling a large antique radio, a scenic unit flies in. A bold, take-charge woman, played by sassy Debra Walton (a Drama Desk nominee), strides in and we are transported to a 1920s Chicago speakeasy where begins a series of sexy little songs delivered by some handsome gangsters and slinky women. Leggy chorus girls squeak and giggle through obscure songs like “You’re Not the Only Oyster in the Stew” and “Chicago Style.”

A burst of lightning and thunder and the setting flashes to The Bowery during the Great Depression. A homeless man, determined to look for the good, considers “Pennies from Heaven” sung with sweet precision and feeling by Ryan Murray (Tom in Guiding Light). Burke’s optimistic but poignant song gives way to his fun “When Stanislaus Got Married.”

That sets you up for Burke’s penchant for humor, deliriously realized in the Radio Show segment featuring Jennifer Swiderski (Broadway, Mamma Mia!), a comic wonder who evokes memories of Lucille Ball. In fact, Swiderski thoroughly steals the show as Vicky Voyay, a ditsy blonde actress who sings “What Does It Take to Make You Take Me?” while getting distracted by her false eyelashes and feather boa.

More songs, like Swinging on a Star, and finally intermission comes. Although thoroughly satisfying, it’s been a long first act and some audience decide to leave. And that’s too bad, because some of the show’s best and most relatable music is about to begin.

A nightclub number, “Imagination,” bring together Denis Lambert (Broadway, Dr. Zhivago and A Chorus Line) and Sara Andreas (Broadway, Catch Me If You Can) in a beautiful pas de deux fantasy with the coat check girl and a waiter. Then there’s the very funny and charming “Road to Morocco” that segues into a five other songs that tell a complete little story about Bob, played by energetic and appealing Brian Ogilvie (Broadway, Gigi and Mary Poppins), and Bing helping a girl, played with fun verve by Mary Little (Arkansas Rep, Les Miserables), escape harem life and head back home.

And, the last segment has one of Burke’s most rhapsodic numbers – “Misty.”

Costume designer Martha Bromelmeier shapes a solid array of costumes which help give life to each of the many characters throughout. Yael Lubetzky’s lighting design is beautiful and moody. And, Craig M. Beyrooti’s sound design creates an immersive experience for the audience.

Many kudos to music director Anne Shuttlesworth who forges the show’s splendid voice and to her fine on-stage “pit” orchestra.

While a musical revue doesn’t have a cast of characters moving through a storyline, this revue does reveal how the music by this Academy Award-winning lyricist grew through three decades.

This show may be long, but it entertains from curtain to curtain. The talent, from designer and director to cast and orchestra, are tops. What’s more, you’ll leave with a deep appreciation of Johnny Burke, a genius music man who painted rich reflections of the world in which he lived.