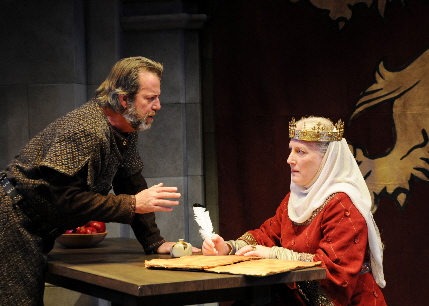 C. David Johnson as King Henry II tempts Tod Randolph as Queen Eleanor with her freedom to get her to sign over lands in Palm Beach Dramaworks’ The Lion In Winter / Photo by Alicia Donelan

To summarize The Lion in Winter as a drama about a dysfunctional family (as we have done regretfully) is to facilely devalue James Goldman’s merciless examination of just how base the human animal can be in the grip of power, greed and ambition.

Director William Hayes and a fine cast make the most of the acerbic gallows humor in the Palm Beach Dramaworks’ bravura production, but they also build Goldman’s underlying case for the less than laudable aspects of our nature.

These feral jungle creatures wearing royal robes and speaking round-toned English are deceitful, even vicious, no-holds-barred fighters who make the scheming politicians in House of Cards look like amateurs.

It is only in the finale when the players have laid waste to the world around them, destroyed whatever they have built over the decades and are peering into a bleak future that Goldman delivers a nearly hopeful finish that honors the resilience of Mankind, a nobility that separate him from the animals.

Until then, audiences have the vicarious pleasure like the crowd around an auto accident watching these brilliant and witty monsters zero in on each other’s weaknesses and indulge more sophisticated gambits than any grandmaster chess player.

Goldman’s 1966 script is one of this critic’s favorites. But it’s terribly difficult, perhaps impossible to find the right balance of wit and drama, and to find a crowd-satisfying resolution in such a dark finale. Aside from the impossible to top 1968 film with Peter O’Toole and Katharine Hepburn, the original stage version has fought to a draw such brilliant duos as Robert Preston and Rosemary Harris, and George C. Scott and Colleen Dewhurst.

So it’s significant that Hayes and Company, especially C. David Johnson and Tod Randolph as Henry and Eleanor, come as close to besting this script as anyone we’ve seen.

Goldman wrote a fictional tale about the real Plantagenet family who ruled England during the late 1100s, a time of wars to consolidate land holdings and bloody rebellions among family members. In Goldman’s non-existent Christmas gathering in 1183 in the Chinon castle, the players negotiate and maneuver in ever-changing alliances for political gain – all aggravated by more garden variety family baggage and intrigue.

The players include King Henry II, the sharpest mind in the country and the hardy survivor of wars both martial and political, now sensing mortality at 50 years old and wanting to pass his kingdom intact to someone. His chief adversary is his wife, the equally brilliant and equally ruthless Eleanor of Aquitane who he has imprisoned for a decade for inciting bloody rebellions.

By their side are their three surviving sons: Richard, an experienced soldier (later to be the Lionheart and crusader) but Eleanor’s favored pawn; Geoffrey, the calculating middle son ignored by both parents, and the oafish young John (much later of Robin Hood and Magna Carta infamy) favored by Henry as his successor. Other moving pieces are Henry’s lovely young mistress, Alais, and her brother, the young King of France, Philip II.

Henry wants John to be the next king, wants to continue his relationship with Alais and wants to keep a strategic piece of land a day’s march from Paris. He also wants to reacquire the Aquitane, a rich land in southwest France that Eleanor and Henry gave Richard.  Then Philip insists that per a previous treaty either Richard be married to Alais or Henry return the Aquitane to France.

And so the skirmishes and battles begins. Far from dry and boring politics, this is a blood match with much bellowing, betrayals among blood kin, drawn knives over slights, and revenge motivated by ancient serial adulteries. Like any family, each member knows what each other is loath to risk; discovering a new weaknesses is an especially precious prize.

At one point Eleanor, trying to wound Henry, plays one of her trump cards, claiming that the rumor is true that she slept with Henry’s father. After Henry stalks out in a royal meltdown likely to bring the world down around everyone, Eleanor slumps on the bed in private and says, drily but ruefully, “Well, what family doesn’t have its ups and down?”

The stakes are high not just for the players; they mean life and death for their subjects who will likely go to war whatever happens. As Henry tells Philip, “We are the world in small. A nation is a human thing.” In fact, there is a bitter sense that the kind of Plantagenets’ family infighting is sadly the kind of petty motivations that determine history.

While Goldman’s script isn’t historically accurate and even anachronistic, he excels at crystalline polished dialogue with witty rejoinders, impassioned speeches and rhetoric as rich as Brandywine. “What shall we hang, the holly or each other?” is one famous line. Eleanor says of meeting Henry in their youth, “We shattered the commandments on the spot.”

The crucial casting of the dueling couple is masterful. These two veteran actors bring decades of hard-won skill to their roles and then make it all seem effortlessly natural. Their facility with language especially should be seen by acting students. They invest their words with a fullness and musicality as rich as the brocaded clothes they wear. Under Hayes direction, both actors create a multi-layered relationship that may be love or hate, or love and hate, or some unique alloy. It’s possible that not even Henry and Eleanor know. But their sharp bright eyes show they are awash in intelligence and a vitality that makes pygmies of everyone around them.

Johnson’s fulsome baritone embraces the marital banter and internal politics like someone savoring a fine wine. His speech disinheriting his sons, one of Goldman’s best, is superb. Randolph’s performance as Eleanor is every bit as fine. She is especially good at showing the Queen in private as she ruefully licks her wounds or shows bemused skepticism at someone’s declaration of emotion.

Hayes has found the tricky tone that alternates quips with life-and-death struggles in the space of seconds. If the performances are this good, he obviously had a hand is creating them. His staging is nearly invisible but effective. Notable is that when a character retreats to the shadowy sides of the stage to nurse their injuries and egos, they continue to be aware what’s going on center stage and react. Finally, perhaps it is my familiarity with the script, but the intricate political maneuverings with their thrusts and parries seemed quite clear under Hayes direction.

The rest of the cast is unassailably solid: Chris Crawford’s brooding mercurial Richard, Justin Baldwin’s needy John and Pierre Tannous’ callow but seething Philip. Special mention is due Cliff Burgess’ Geoffrey for making his textbook motivation of not being loved as a child a completely credible facet of the character, and Katherine Amadeo, thank goodness, has a different take on Alais who is often played like a hapless borderline simpering victim buffeted by the gales of power. Amadeo’s Alais may have little inherent clout and knows she is out of her weight class among these titans, but she has enough pride and intelligence not to quietly acquiesce to being the pawn that the others make of her.

A tip of the hat, as well, to dialect coach Ben Furey, although Randolph, a veteran of Shakespeare, likely needed little help.

Finally, Dramaworks has outdone itself in the creative departments. Michael Amico has created a palace whose granite stones correctly seem laid only a few years earlier, not worn down by the centuries. It features vaulting leaded windows, tapestries, heavy wooden furniture – all of it evocatively lit by Ron Burns. The play has many scene changes facilitated by a turntable, which is impressive because it appears a huge stone wall is rotating.

But the real stunner is Brian O’Keefe’s breathtaking array of clothing that seems to be the height of fashion for the High Middle Ages: gilded crowns, fur lined robes, brocaded tunics in a cornucopia of patterns, elegant gowns, all layered against the winter chill.

Note: Dramaworks launching Dramalogue, a program designed to provide theater enthusiasts with an entertaining and educational glimpse of various facets of theater production. The events focus on topics from the theater world, including some that feature an in-person discussion with a theater professional, a format similar to the popular TV show, The Actor’s Studio. The first offering on Dec. 10 is Our Fair Lady: Sally Ann Howes, interviewed by Lee Wolf. Howes, a Palm Beach resident, made the cover of “Life” magazine when she succeeded Julie Andrews in My Fair Lady. A child actress in her native England, Howes was also seen on Broadway in Kwamina, Brigadoon, What Makes Sammy Run? and James Joyce’s The Dead, and may be best known for her role opposite Dick Van Dyke in the film Chitty Chitty Bang Bang. Tickets are $20