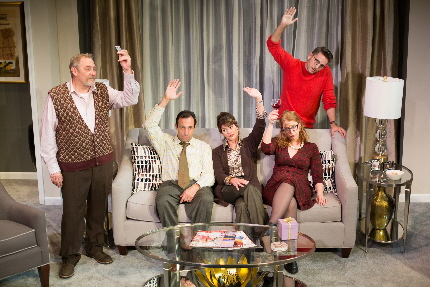 The stage is a fungible place. Sets can transform, actors can fly, characters can break walls, especially the fourth. There is limitless potential in the blank canvas of floorboards and lighting, as Stuart Meltzer’s gently experimental The Goldberg Variations reminds us.

Goldberg is a play of deviations and do-overs, of acting within acting, and it revels cheekily in its freewheeling formalism. It’s not a musical, but it sometimes wants to be: Backstory is delivered with a backbeat, emotions are communicated with chorus lines. In its world premiere at Island City Stage, the actors seem appropriately unshackled: These are fun roles to play. Yet beyond its quippy referentiality (self- and otherwise), Meltzer’s dramedy confronts the more desperate corners of the human experience. In particular, it illuminates the coping mechanisms we install to avoid acknowledging painful truths.

The show’s title, of course, echoes J.S. Bach’s harpsichord aria and its 30 variations, a piece that has long enchanted Meltzer. His play refers to the composition directly, but its presence looms largest in The Goldberg Variations’ conceptual DNA—the idea that a story, like a composer’s work, can be replayed time and again, with subtle changes that speak volumes.

The “composer,” in Meltzer’s case, is Caleb Goldberg (Ryan Didato), our reliable if troubled narrator. Standing in the living room of his family home—another elegant Michael McClain interior, decorated with stylish knickknacks and an abundance of framed memories—Caleb addresses us before his kin. He’s back home to celebrate an annual tradition, the 86th birthday of his paternal grandmother. That she happens to have been dead for 21 years is the eccentric punch line.

We get the impression the Goldbergs don’t commune much, and it’s hard to blame them. Caleb is gay, a fact that his more-conservative father, Sam (Peter Librach), has never fully accepted. His mother Judy (Patti Gardner) makes up for Sam’s disaffection in excess, needling her son about his promiscuity, and his lack—until now, anyway—of a serious romantic relationship. With his sister Charlotte (Ilana Isaacson), he maintains at best a surface comradeship tempered by sibling jests.

Everybody is keeping secrets from one another, because of self-protection or guilt or avoidance or denial, but they’re going to spill forth like ashes from an urn over the next 90 minutes. Or, rather, they’ve spilled already: As we soon learn, the dramatic events of The Goldberg Variations have already happened. Ostensibly for our benefit, Caleb has corralled his extended family—including Theodore (John Manzelli), Charlotte’s cuckolded husband, and Pablo (Alex Alvarez), Caleb’s boyfriend—into a series of sportive re-enactments of the momentous night, suspending time until the lead-up to the toughest revelation of all.

This conceit allows for a colorful palette of self-reflexive asides and high-concept diversions, with family members “flubbing” their lines in certain variations, pausing for bathroom breaks prior to others, and condensing laborious exposition into witty musical numbers. Pablo’s rap song about his upbringing as a gay man from a broken home is expertly performed by Alvarez, with a capable assist from the beat-boxing Isaacson, and it really lights up the stage. (It’s also probably the only time you’ll ever see Peter Librach bust anything resembling a move.)

The Goldberg Variations is a comedy for at least 75 of its minutes, and Meltzer piles joke upon joke at a sitcom writer’s clip. More work than not, and they land better than they did a year ago, at the play’s premiere reading at Lynn University. Yet Meltzer’s cornucopia of references, from Madeline Kahn to Marsha Mason to Gunga Din (Pablo, we soon learn, is quite the cinephile), can be a bit much. At times, The Goldberg Variations feels like being marooned among the myriad chutes and ladders of Meltzer’s temporal lobe. However, Judy’s likening of Bach as “the Barry Manilow of his day” is unimpeachably a keeper.

Andy Rogow’s fluid direction eases gracefully between the evening’s variations, skillfully staging competing conversations and actions while keeping both in focus. He’s aided by ace lighting from Ardean Landhuis, who smartly navigates the play’s many transitions from present to immediate past.

The cast is mostly on point, with Alvarez displaying natural comic chops and poignantly delivered insights, and Gardner effortlessly embodying the archetypal Jewish mother, stern and prodding but genially deprecating.

Manzelli finely captures his character’s henpecked deference and graceless sense of humor—it’s probably not the most endearing role in the script—but he transcends the caricature when he finally stands up to Charlotte’s constant domineering, like a canine developing a bite. The result is the production’s most moving moment.

Isaacson could use more nuance to soften Charlotte’s sharp edges. She also struggled to remember her central monologue on opening night, looking every bit the canoeist without a paddle, and momentarily taking us out of the experience. Didato’s Caleb is OK, if not especially memorable—an occupational hazard when playing the straight man (in a sense) in a roomful of outsized characters. He doesn’t bring much presence to the role outside of the necessary narration, and the story’s main conflict—Caleb’s years of emotional estrangement from his father, and their attempts to reconcile—doesn’t affect us with the intended catharsis.

If there are moments when the production’s potential surpasses its performance, The Goldberg Variations remains an indelibly personal work from an idiosyncratic writer. By discovering innovations within a seemingly moribund genre—the dysfunctional family comedy, post-August: Osage County—he’s helped to revive it, in all its variations.