Report From New York: Six Degrees Is A Forgotten Gem 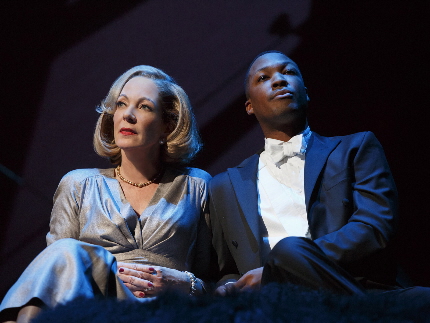 We’re back from our trip to New York to scout out productions you might want to see (or not), shows that might tour South Florida and scripts that might be worth reviving in our regional theaters.  Other shows—all were nominated for Tony Awards– that we have reviewed recently or will review in the next few weeks are War Paint, Oslo, Indecent, Bandstand, The Play That Goes Wrong, and Natasha, Pierre and the Great Comet of 1812. Just search for “Report From New York.”

For some reason, Six Degrees of Separation has fallen off the radar of regional theaters mounting semi-contemporary plays that depict and dissect the angsty zeitgeist of modern life. But the Broadway revival at the Barrymore was a clear reminder that companies in South Florida ought to consider this trenchant expose of 50 Shades of Neediness.

The fragile human ego’s need for self-validation is the common thread among most of the characters in John Guare’s insightful drama buoyed by considerable humor about upper middle class New Yorkers with aspirations of rising another social level who are taken in by an equally needy young con man in search of a nurturing family.

The production closed late last week, a month early, after losing Tony Awards for best revival of a play and best actor in a play. But the smart production had a sterling cast headed by starring seven-time Emmy Award winner for The West Wing Allison Janney (Tony nominated for A View From The Bridge and 9 to 5); Tony Award winner John Benjamin Hickey (The Normal Heart and a score of their plays) and Tony nominee Corey Hawkins who has theater experience but is best known for The Walking Dead and 24: The Legacy.

Under Trip Cullman’s smooth direction, the play may be set in 1990 New York City, but the issues of people seeking self-worth in a competitively sophisticated urban environment resonate anywhere and have not changed a whit.

The story tells of Flan Kittredge, an upwardly mobile art dealer to the rich, and his partner/wife Ouisa, who live beyond their means as they strive to climb that social ladder. One night, their lives are invaded by Paul, a handsome charismatic young black man who claims to be Sidney Poitier’s son and an acquaintance of their children attending Harvard. He charms them with the prospect of appearing in his dad’s next project, a film version of Cats. No matter how ludicrous, Paul seems to offer the couple an entrée into a world they crave.
But even after it is revealed that Paul is a canny opportunistic street hustler who has learned the external details of the Kittredges from a male lover, the major parties, their friends and even grown children continue to play out scenarios based on their lingering unsatisfied needs.

Much of the story is related directly to the audience by Flan and Ouisa as if they are sharing a droll if exciting tale with their guests at a dinner party. As self-amused and self-deprecating as their story telling is (they seem to be getting a buzz just in the retelling), their pleasure and pride emanates through the sophisticated self-deprecating detachment they wrap themselves in.

Cullman and his cast are not afraid of silences when characters such as Ouisa and Paul exchange meaningful messages with intense glances of communion.

The script and the production are rife with secondary themes of shallow white liberal guilt, the efforts of parents to find affection and validation elsewhere when their children turn out to be disaffected selfish jerks, nurture versus nature,

But what resonated the loudest is that everyone on stage down to secondary players, from the marks to the dissembler, palpably yearn for connections that may or may not be attainable, but which Ouisa famously mulls over in her speech about the theory that everyone in the world from the President of the United States to a native in a rain forest is connected to each other by a trail of six people.