Posted on December 7, 2020 by Bill Hirschman 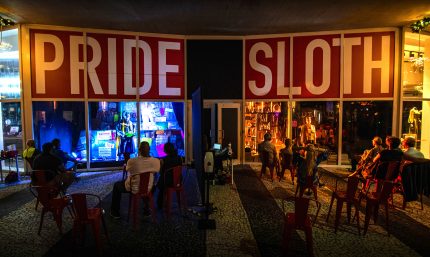 Necessity, it is said, is the mother of invention, and we need theater right now. And so it was only a matter of time—and resources, and logistical somersaults, and COVID compliance challenges, and some good fortune—until one of South Florida’s most experimental companies would find a way to produce theater outside of a theater.

Nine months into a pandemic in which theatergoers and theater artists have had to make do with live streams, audio plays, virtual workshops and other important but insufficient substitutions for the in-person synergy we dearly miss, the sheer existence of Miami New Drama’s experiential short-play collaboration 7 Deadly Sins feels as surreal as it is miraculous. It faintly resembles an al fresco Summer Shorts, or a roving Juggerknot production without the audience immersion, but comparisons to the region’s other playlet producers do not do it justice. Part cabaret, part site-specific art installation, part expression of an alienated zeitgeist, it’s an experience unlike any other.

It begins like any Miami New Drama performance, at the Colony Theater box office, where attendees pick up color-coded wristbands. This is where proceedings diverge from the norm; until the show begins, everybody is shuffled into “Purgatory,” a cordoned-off section of Lincoln Road just west of the theater, where bartenders mix themed libations and we await our fate. The evening’s music director, Wilkie Ferguson, plays instrumentals on a keyboard on a pop-up stage. Between the hellish production design, the mostly silent Miami New Drama ushers carrying LED torches, and everybody’s mandated face coverings—Ferguson’s mask is a bold, sequined red—you might feel as if you’ve stumbled into Eyes Wide Shut.

Eventually, singer/actor and “Mistress of Purgatory” Kareema Khouri joins Ferguson onstage for a brief set of topical songs, including a rousing rendition of Nina Simone’s “Sinnerman,” after which the sizable crowd divides into small groups, following their assigned usher to one of seven makeshift stages. Six of them are modified storefronts visible from Purgatory, while the seventh takes place in a carved-out backstage proscenium at the Colony; every space is contained within a single block.

From socially distanced seats, we watch these 10-minute premieres, most of them directed by the company Artistic Director Michel Hausmann, and each inspired by one of the seven sins of the title. Since the actors are mostly quarantined behind glass panes, we can only hear them by listening through supplied earbuds (you can also bring headphones from home), which you plug into sanitized, seat-mounted wireless receivers. There is nothing like a global pandemic to bring out the best in modern technology.

Like every short play collection, there are hits and misses, and everything in between. The best work, which is also the most classically constructed, is Moises Kaufman’s “greed” entry, All I Want is Everything!! It’s set at the funeral of a patriarch, in which the deceased’s children, played by Gerald McCullouch and Mia Matthews, discuss their potential inheritance. McCullouch embodies every avaricious corporate vulture we love to hate, and Matthews is magisterial, finding shades of emotional depth and nuance as her character stands up for the man in the casket, and not just his bankroll.

Kaufman’s play is almost a PSA, which is to say it’s written with clarity and insight, and with a concise beginning, middle and end. The scenic design—Christopher and Justin Swader designed all the sets—transcends the awkward restrictions of the storefront space for symbolic effect, placing a coffin as the object that literally divides the siblings.

The most fun play in the set is Rogelio Martinez’s Itsy Bitsy Spider, a riff on “gluttony” in which an exiled Richard Nixon (Gregg Weiner) gets plastered in a piano bar circa 1987, ranting and raving about his Electoral College victories, screaming about the “dead people” who voted against him, and asserting “I’m still president of the United States—but no one knows it!” Martinez cleverly traces the lineage of one paranoid Republican crook to another, and Weiner plays the stooped-over devil for all of his lunatic charisma. In a bit of the good fortune mentioned above, this play is set in the interior of a former South Beach restaurant, providing for the deepest and most realistic environment for Weiner and Christopher Renshaw, as his long-suffering assistant/butler, to play.

A handful of works similarly reference current events, but in more direct ways. Dael Orlandersmith’s “wrath” monologue Memories in the Blood features Carmen Pelaez as a New Yorker navigating a sweltering pandemic summer, only escaping her prison of an apartment for visits to the Essex Street Market, bemoaning how “the masks are killing us in extreme heat.” Pelaez’s seething bitterness is relatable, but Orlandersmith’s play is too dense for its brevity, meandering into lyrical existential spaces far afield from the emotions it initially engenders.

In one of the cleverest ideas of this motley bunch, Pelaez, this time as playwright, penned the “pride”-themed Strapped, which explores our past summer of racial reckoning. Stephen G. Anthony, irresistible in ashen hair and makeup, and mastering a genteel South Carolina drawl, portrays the toppled Confederate statue of John C. Calhoun, wrapped in yellow tape and surrounded by “Black Lives Matter” and related posters. Defiant even in postmortem, Anthony’s Calhoun is casually chilling in his defense of slavery, as he lauds the “quick reflexes” and “good teeth” of one of his favorite purchases. But Pelaez paints her script in shades that are as gray as Anthony’s complexion, using her character’s rancid mouthpiece to puncture the hypocrisy of today’s “Karens” and other privileged white BLM backers who are the first to click their tongues when people of color enter their personal space.

Race also plays a central factor in Aurin Squire’s “Blackfish,” in which a professor of African studies (Sandi Stock) pulls a Rachel Dolezal by appropriating Blackness for a career boost. Between the dim lighting, Marina Pareja’s astute costuming and a Swader set comprised of African tribal art and literature, Stock is marvelously adept at embodying societal notions of “Black,” playing with cultural signifiers in provocative ways. Whether the play has anything to do with the supposed theme of “sloth” is another story; suffice it to say, the thematic linkage here is a stretch.

Rounding out the plays are a couple of two-handers that fall a tad short. In Hilary Bettis’ “envy” play andre and erica, Andhy Mendez and Renata Eastlick play former lovers, both accomplished pianists, who reunite backstage at Carnegie Hall prior to Andre’s debut there. The actors are convincing enough, with Eastlick in particular pivoting from charm to vengeance with ease, but the play feels like a work in progress, a 10-minute excerpt from a full-length story of a wilted relationship.

There is also potential within Nilo Cruz’s “Amsterdam Latitudes,” which makes the most artful and logical use of the glass storefront. Jessica Farr, in fishnets and stilettos, plays a peep-show performer shaking her assets in the Holland capital’s Red Light District. (Inevitably, she’s the actor most likely to catch the eye of pedestrians strolling Lincoln Road just outside of Purgatory, a meta break that Farr has fun with.) Caleb Scott is her desperate final customer on the last day of business before the pandemic lockdown, seeking not sexual gratification but information about a previous client. Cruz’s ambitious “lust” entry has multiple layers, but it too feels like the climax of something more expansive, and I didn’t quite buy the actors’ whiplash-inducing emotional hydraulics in such a short duration.

The show is advertised as 90 minutes; somehow it lasts two and a half hours, a full evening of entertainment bookended by live music. Is it a strange way to see theatre? Absolutely: Ambient street clatter occasionally bleeds into the experience, and there is a degree of mental as well as physical separation in these partitioned stages, with the actors positioned as if in museum dioramas, the audience cocooned in headphones, listening into private dramas like Stasi officers on surveillance duty.

Despite such inherent peculiarities, 7 Deadly Sins is an ingeniously conceived work-around at a time when we’re all hungry for theater. It is, for all of its abnormality, a momentary reminder of the old normal of live theater—with actors actually in front of you, not in little squares on a computer. It’s worth going all the way to Hell for it. 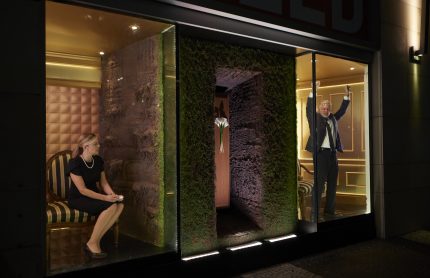