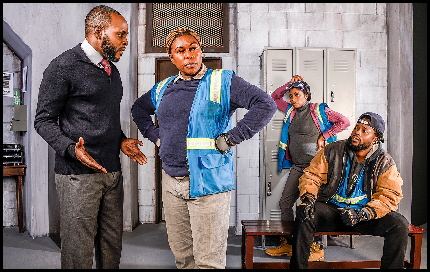 Amid a starry constellation of superb theater from GableStage this season comes a supernova of passion, pain and socio-political protest in a benchmark production of Dominique Morisseau’s scorching drama Skeleton Crew.

Its portrayal of African-American workers in a small Detroit auto plant teetering on the abyss of closing is an incisive examination of the racial issues that intensify and complicate the impending tragedy, but its larger depiction of a world evaporating under our feet crosses all demographic boundaries.

Morisseau, a MacArthur Grant recipient praised as a linchpin among a new crop of emerging playwrights, could not ask for a better production. It pits dreams for the future, community solidarity and hard-won pride against a heartless, pitiless system encompassing institutionalized racism and feudal employers.

The quartet of familiar local actors could not be bettered under the surprisingly skilled direction of fledgling stage director Edson Jean. But they draw strength from the dense raw material that Morisseau has given them: the trenchant observations of complex long-term relationships struggling under extreme pressure and her breathtaking verbiage rooted in street vernacular but harboring near poetic expressions of humanity.

Set in a factory breakroom in 2008, we are eased into meeting four characters who are more than co-workers; most have a history with each other outside the plant.

Faye (Patrice DeGraff Arenas) is the compassionate union rep who has worked in almost every job for 29 years. Her stated goal is to last one more year (and hoping the factory will as well) so she can leave with the optimum retirement package.

Shanita (Rita Cole) is an intelligent hard-working pro who observes the rules because she believes in them. But her main need to stay working open-ended is because she is pregnant with no husband.

Dez (Jean Hyppolite) comes across as a playful charming street hustler who playfully hits on Shanita, but he wants to stay working long enough to earn funding for an automotive garage.

Reggie (Jovon Jacobs) comes from the same street level blue collar background, but he has worked his way into a low-level supervisor position. He has married, has two children and bought a house in a safe neighborhood as the next step into what once seemed impossible to achieve security. But he is “walking the line” between company management and doggedly trying to protect these three, each of whom has multiple vulnerabilities to being fired (For instance, Dez and Faye gamble at cards in the breakroom).

All have developed varying pragmatic mechanisms for coping with the cesspool of violence, racism and injustice that dominates their environment.

Faye scoffs, “I don’t abide by no rules but necessity. I do what I do ’til I figure out another thing and do that. And that’s all I got to say about it.”

But more importantly, all have dreams including some not immediately revealed to the audience or their colleagues, and most have personal connections. For instance, Faye was close to all of their mothers, and while she is not a surrogate parent to them, she cares and counsels them.

One of the scripts’ strengths is how everyone has secrets, backstories and exposition lightly feathered in by the writing and by the performances without the self-conscious effort many plays stumble over.

No surprise, problems intensify when Reggie privately tells union steward Faye that the usually-ignored rumors of the plant closing are true. He begs for her silence to give him time to find soft landings for his crew before the company makes it public.

As we discover each of the four’s deeper secrets, we realize that the closing poses even more serious problems than we first realize. Tragedy is not only imminent but seemingly inevitable as each character finds himself or herself in an ever tightening vise of no-win options that threaten anything any of them has achieved in their lives so far.

This script is part of three-play cycle Morisseau wrote about Detroit. Local audiences might recall Primal Forces’ stunning 2014 production of her unrelated Sunset Baby with the much missed Makeba Pace and Ethan Henry plus John Archie.

But this script is even more affecting as she provides her characters with those dreams and philosophies, sometimes expressed with sharp wit, other times with flashes of emotions.

And the overarching trait expressed in different ways is each character’s  justifiable pride of those who have survived this antagonistic life-sapping world.

Nowhere is this more moving than in the speech given to the pregnant Shanita when she doesn’t know the plant is closing. She is explaining why she doesn’t want to accept the offer of a reliable job in a business copy center.

Her long aria delivered with ineffable beauty by Rita Cole, reads in part, “Here, I feel like I’m building somethin’ important. Love the way the line needs me. Like if I step away for even a second and don’t ask somebody to mind my post, the whole operation has to stop. My touch…my special care…it matter. I’m building
something that you can see come to life at the end. Got a motor in it and it’s gonna take somebody somewhere. Gonna maybe drive some important businessman to work. Gonna get some single mama to her son’s football practice. Gonna take a family on they first trip to Cedar Point. Gonna even maybe be somebody’s first time. Who knows? But I like knowing I had a hand in it, you know?… Uncertainty is always there. But it’s the work I’m made of….Being a highly skilled job-setter…that’s something I can stand on. Everybody can’t say that. Everybody can’t do what I do. I belong here. Ride it ’til the wheels fall off.”

At the same time, they know – and resent – the unfair reality that their skills, intelligence and proven abilities are likely not enough to save them.

The peerless cast all share the essential chemistry (three were in New City Players’ production this season of A Raisin in the Sun) and a talent for bringing out the musical rhythms in the dialogue.

Cole, who recently changed her stage name from Rita Joe, once again proves she is one of the finest actresses in the region in this creation of someone who has been betrayed by people and by society, yet who nurses hope for a future. Like the others, Cole exudes Shalita’s basic human decency despite a life that has discouraged it.

Arenas, unforgettable as the mother in New Theatre’s Gidion’s Knot in 2014, makes each surprising facet of her life and character totally believable as they are revealed during the evening, even when in retrospect they might seem mechanical  devices. Arenas’ Faye would never acknowledge being a maternal figure to her colleagues but in fact that’s exactly what she exudes.

Hyppolite’s Dez has the street-burnished swagger of young man willing to let people inaccurately believe he will do anything to get what he wants when in fact he has a laudable ambition to break out of this lose-lose paradigm. His Dez struggles with remaining an honorable, even secretly vulnerable man in a world that deems to only reward the opposite.

Yet it’s Jacobs, fresh off playing the disparate roles of Walter Lee in Raisin and Cory in Palm Beach Dramaworks’ Fences, who triumphs portraying the tightly-wound man trapped between his past and his future, the people he cares about and the people who control his economic security. His performance virtually vibrates with the angst and agony of being caught between loyalty to friends endangered by the plant management and the welfare of his family dependent on his playing along.

For the last few years, GableStage Producing Artistic Director Joseph Adler has been handing over one show a season to experienced directors with stellar results such as Michael Leeds’ White Guy on the Bus and Gail Garrison’s Actually.

He has taken a major chance this time in the name of developing young talent. Edson Jean is a young actor/director writer who has acted in supporting roles, but who has focused heavily recently on a career as a digital filmmaker. But Adler hired him to serve as an associate director of the company’s last production, Kings.

Adler’s commitment paid off. Jean’s work here —  his first as solo director of a stage play – is skilled and assured. In keeping with Morisseau’s wishes, he has powered this arc with a pile-driving pace and a ferocious tone of sweat and sinew in these colliding conflicts.