Posted on November 1, 2014 by Bill Hirschman 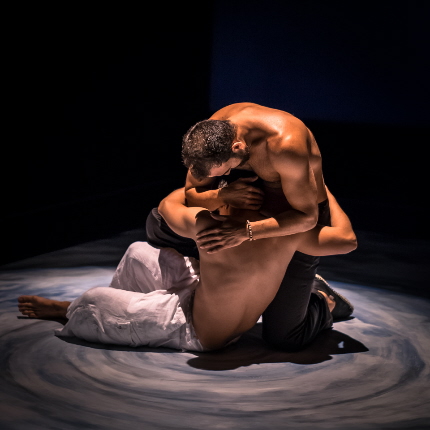 The meteorological tempest dies down, but the emotional tumult rages on at a Cat 5 level in Nilo Cruz’s superbly staged world premiere of Hurricane, getting a criminally brief run at Arca Images in Miami.

Rarely do South Floridians see such a highly polished and boundlessly inventive alloy of words, sounds, movement and stage pictures as Cruz does here directing his own expansion of a previous short play into a full-length work.

Amid one of the strongest opening weeks of a local theater season in recent memory, Hurricane would give everyone stiff competition in every category at the Carbonell Awards if the run wasn’t so short.

It has flaws including, paradoxically, now running a hair long at 80 minutes and playing just a shade over the top without a respite, even for a work meant to be operatic not naturalistic.

But savor Cruz’s ability to create poetic metaphor out of the most everyday vocabulary, his ingenious use of set pieces like a hotel luggage cart, his endlessly varied use of body language bordering on modern dance, his ability to help his three actors wrench glowing emotion from their souls.

This is precisely what so many non-traditional companies aim for and only occasionally come close to achieving.

Hurricane portrays in a highly theatrical and stylized manner the tale of a family living on a Caribbean island. The father, Forrest (Serafin Falcón) a former missionary, suffers a shattered leg and a concussion while rescuing his adopted son Aparicio (Andy Barbosa) as a hurricane sweeps through the island and the auditorium.

A guilt-ravaged Aparicio and his mother Ria (Lela Elam) are stunned to find the storm has left Forrest with amnesia. Among other themes, Hurricane asks what part memory plays in establishing who we are. As Forrest struggles almost viscerally to regain what these two strangers tell him that he has lost, he says, “A man who has no past has no present… He has ceased to exist.” The sole memory that does creep in is that of a woman whose name is unknown to the others. Her presence is a palpable second person living inside Forrest.

The bulk of the play is the journey attempting to regain the past and to heal the sundered family. It involves soul-baring efforts and a near fatal sacrifice.

This is not technically the magical realism that Pulitzer-winning Cruz (Anna in the Tropics) is known for; rather it takes Ria’s nature-based world that fears the wrath of sea gods, and pits it against the newer 2,000-year-old religion of Christianity that Forrest proselytized.

The level of performance can be seen in the actors’ eyes ablaze with pain, love, fear, joy, guilt and agony. Each embraces Cruz’s lyrical vocabulary and rhythms. Elam, in particular, makes the stylized dialogue and speeches sound absolutely organic when they are decidedly not naturalistic at all. Words pour from her mouth in a lilting torrent like the runoff after a storm and she aches so profoundly for her family that you can almost touch it.

Falcón’s extensive experience on stage and film allows him to inhabit Forrest as if he were a suit of tailored clothes. He is especially skilled physicalizing Forrest’s injuries, the left foot dragging under a wheelchair, the jutting chin, the curled shoulders, the nervous twitch of the head as if he had palsy. Above all, his piercing dark eyes are awash in Forrest’s confusion and pain.

Barbosa convincingly plays an adolescent consumed with an inferno of guilt. He courageously throws himself into Aparicio’s unending angst. It takes a skilled actor like Elam and Falcón to sustain this heightened level of emotion convincingly for 80 minutes. Barbosa, who never operates at anything lower than 8 or 9 on the scale the entire evening, doesn’t have the chops yet to pull this off and, after a while, you may wish he would just dial it back a little bit.

On the other hand, he excels in one of the production’s greatest strengths – Cruz’s choreographic staging of movement. Rarely does Cruz allow Barbosa to remain still very long, having him nervously and anxiously contort his body as if he was an Alvin Ailey dancer. The aforementioned luggage rack standing in for several different things such as a tree provide Barbosa and Cruz an acrobat’s workout station to wrap his body around like an Olympic gymnast. It is a beautiful and breathtaking visual expression of Aparicio’s intense torment.

With a few intentional exceptions, Cruz’s fluid staging keeps the three characters almost always in motion, circling and confronting each other as if the storm is still swirling, especially Aparicio who finds a half-dozen ways to interact with a wheelchair.

Some metaphors are not verbal but visual coups de theatre. In a monologue, Aparicio is trying to reason out what is happening with his parents. He lays out diagonally across the stage a separate length of string for each parent, having them intersect where Aparicio is standing. Then he winds the two skeins back up. But in the next scene when he confronts his parents, notice how those strings somehow have become bindings around his wrists.

Cruz also makes the most of his few set pieces: the rolling cart, plastic milk crates, the wheelchair. At one point, Forrest drapes his armless T-shirt over his arm to mime the recollection of a woman playing a cello. Another time, Forrest is talking about the mysterious woman whose coexists in him. He holds up a simple white sheet in front of him, but he pinches the corners into short tails like the arms of a dress, creating the illusion of the woman’s spirit inside him.

The production has a few places it could be shored up. First, the expansion from 40 minutes to 80 may have been wise, but now it feels just a shade too long in places. It doesn’t need to lose entire scenes, but it could benefit from some trimming here and there when a dramaturgical point has been made and made again.

Fernando Teijeiro’s simple set encompasses the swirling eye of the hurricane that remains swirling on the floor of the stage and a backdrop of rent-apart debris from the storm. That extends to the Juan Carlos Velasquez’s two-story tall projections of roiling swells in an angry sea of almost mythic proportions.

Under Cruz’s vision, the costuming by Gema Valdés and mercurial nimble lighting by Gary Lund is peerless. Kevin Kennedy’s sound design provides the frightening aural hurricane with its raging winds and pounding surf as well as a musical soundtrack brimming with Caribbean percussion and ancient chants.

Arca Images, producing here with the hosting Miami-Dade County Auditorium, is a company best known for Spanish-language productions, sometimes providing English supertitles (It does the reverse for this show). With Cruz having returned to Miami as his home base, it has mounted a revival of his Hortensia and the Museum of Dreams, and earlier this year, the world premiere of his Sotto Voce, directed by the playwright.