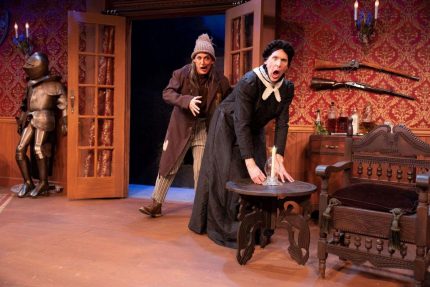 Andy Rogow is the director of Island City Stage’s The Mystery of Irma Vep, but were he a less humble man, he might also take the title of chief illusionist or conjurer. For the production is nothing if not a magic show, a self-aware cornucopia of tricks from a creakier, more analog time of stage wizardry, in which a stealth army of backstage ninjas can make a painting bleed, or create a real blaze from a fake candle.

When I first laid eyes on the scenic design, by Ardean Landhuis, I thought I’d entered a Victorian England escape room—wall-mounted pistols, a knight’s coat of armor positioned like a mannequin, a volume on Egyptian mythology prominently displayed on a living-room library—and the vibe isn’t far off. The unlocking of hidden crannies within this clue-riddled Pandora’s Box is intrinsic to the play’s charm.

It also works overtime to sell what is, on paper, a toothless satire on material that has already gone to camp time and again over more than a century of postmodern entertainment. At its height of popularity, in 1991, Charles Ludlam’s spirited spoof, which premiered in 1984, ascended to become the most-produced play in the United States. Like The 39 Steps, it’s one of the quintessential community-theater productions, in that it presents fun challenges for a cast and crew while offering its audience a night of delicious, if empty, calories. One cannot inject relevance or armrest-gripping urgency to a show that doesn’t aspire to them, but in every other facet Island City Stage has produced a work that fires on all cylinders of imagination and theatrical ingenuity.

At the heart of Ludlam’s industrious ethos is the casting, in which two actors, both determinedly of the same sex, breathlessly inhabit all eight of the show’s characters, including a proper chambermaid and a louche swineherd, an intrepid Egyptologist and a dancing mummy. All of these and more are played by Bruce Linser and Larry Buzzeo, whose telepathic chemistry, deft comic timing and ability to play everything straight and cool and collected—even when granted less than 10 frantic offstage seconds for a complete costume and character transformation—is a testament to their own gifts and Rogow’s nurturing hand.

Linser plays Edgar Hillcrest, lord of Mandacrest Estate near Hempstead Heath, in a time period set “between the wars.” He lives in this gothic pile with his new wife, Lady Enid (Buzzeo), a dainty sort in unwinnable competition with Edgar’s dearly departed first spouse, Irma Vep, appearing in a severe portrait over the fireplace and still seeming to pull the strings, if you will, from beyond the grave. Housemaid Jane Twisden (Linser), for one, remains loyal to Irma Vep, though Nicodermus Underwood (Buzzeo), the mansion’s uncouth caretaker, has taken a shine to Enid—that is to say, he’s taken a shine to just about anyone of the female persuasion.

The night in question is, needless to say, dark and stormy. There are rumors of a werewolf roaming the moors outside the manse, and of a vampire prowling the property, and a mystery that Lord Edgar must travel to Egypt to solve; the beginning of Act Two is, indeed, set near the pyramids, with a tapestry of kitschy Egyptian iconography signifying the change in setting. And there’s Irma’s ghost, locked away in the hollows of the house. If this all sounds random and disconnected, Ludlum is in on the joke: “Somehow, none of this makes sense,” Enid comments, in one of the show’s many Brechtian double entendres.

Following the story’s logic, then, is a fool’s errand (though if you’ve read your share of Du Maurier and Bronte, you’re one step ahead). The Mystery of Irma Vep lives and dies on the execution, and Island City’s is top-notch in every capacity. The costumes, while rented from the Lyric Theatre of Oklahoma, fit the characters like second (and third, and fourth) skins; at one dizzying juncture, Buzzeo portrays Enid and Nicodermus simultaneously, whiplashing between the characters, each costume covering half of his body. The dresses Buzzeo dons as Enid even mirror the patterns on the drapes and wallpaper, complete with tassels, in a perceptive marriage of Landhuis’ scenic design, the original costumes, and W. Emil White’s costume supervision.

While already chock full of omnivorous cultural references, from penny dreadfuls to William Shakespeare to “Psycho,” Rogow and his team have modernized the material while staying true to its zany vision. There’s a nod to The Matrix and another to Lady Gaga. In one of the funniest gags—which may have appeared in the early productions—Jane and Enid perform a dueling-dulcimer number in reference to a certain 1970s backwoods thriller.

The Mystery of Irma Vep is not high art, and the jaded theater critic (guilty) is probably not its target audience. But there is certainly an argument to be made that irony is overused, and that theater needn’t lecture us, at least not all the time. Rogow and his cast and crew have mounted this silly relic with a fresh coat of luster and with genuine affection for the material. It’s all you can ask and more.