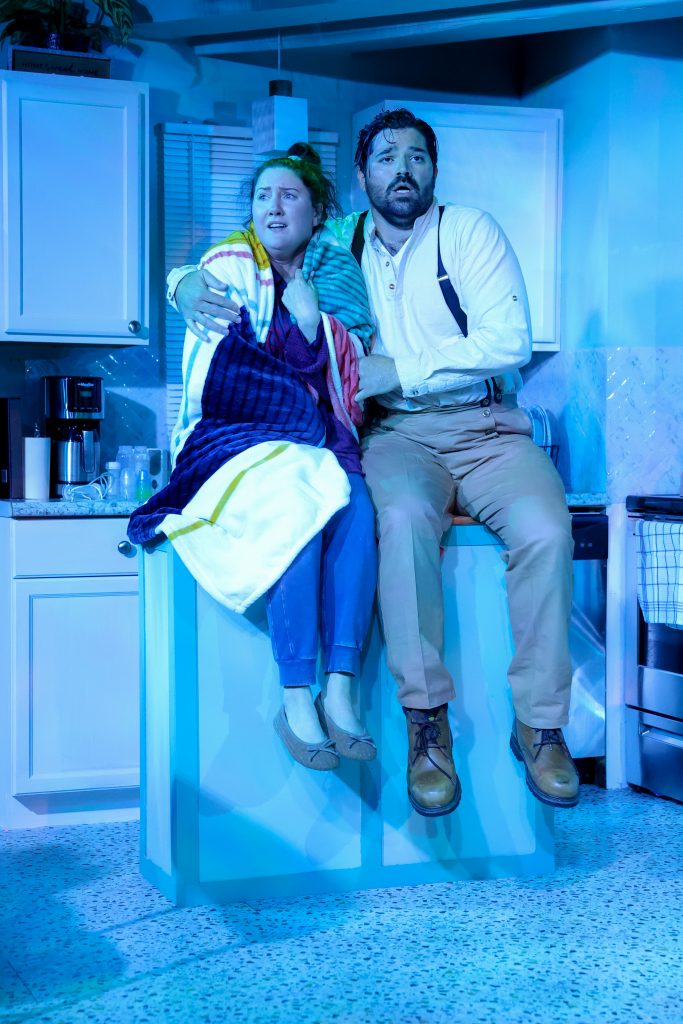 Buckle up if you’re attending the world premiere run of Overactive Letdown at Theatre Lab as a new mother spirals out of control in a harrowing descent into madness.

Crumbling under the post-partum pressures of caring for an infant, aggravated by today’s tsunami of parenting dictates from scientists, doctors, social experts and friends, our heroine Christine’s considerable intelligence, humor and charm evaporate.

In Gina Montét’s drama developed in part in South Florida programs, Christine seeks refuge from the overwhelming demands of motherhood including raging hormones and breast feeding difficulties that men cannot imagine while her educator husband Mark works double shifts to pay for their livelihood.

Later confined to their apartment after a difficult C-section, she escapes the escalating demands by watching mindless television programs. But falling asleep during them, she finds herself inside ever more convincing hallucinations that start with a Regency period soap opera and then insert her in the perilous ends of Titanic, Law & Order and The Walking Dead.

As her exhaustion and paranoia escalates, she rejects the help of a friend and hides her secret life – now seemingly her real life – from her supportive husband.

About mid-way, the journey clearly is heading for a headline finale, which, when it happens, is still the kind of heart-stopping moment that paralyzes a stunned audience who cannot shake off the shock and cannot begin applause until the cast has filed back out onto the stage in the light.

But while Montét, who had a C-section herself, wants to explore the pressures of motherhood, her real target is how we poorly deal with the emergence of mental illness, not wanting to admit it to ourselves or anyone else, not seeking help, going to extreme measures to hide it when everything is supposed to be wonderful.

Instrumental in the success of this new work is the skilled work of director Margaret M. Ledford and actress Lindsey Corey who have been with its development for some time.

Together, they have delivered a carefully wrought arc, beginning with the warm scene of pre-birth preparations and smoothly progressing step by step into the deepening abyss. They succeed in making each increasingly dark and weird hallucination so totally credible that Christine would believe they are happening. And crucially for the audience, despite the encroaching calamity, Montét and Ledford infuse comic moments, black humor and wry lines to keep the evening from getting lost in unrelieved tragedy.

Corey, equally accomplished in musicals, comedy and drama, adds a benchmark to her resume that tears at the audience’s heart in a tour de force performance of growing frustration, fury, sorrow and terror. The fact that she creates someone as recognizable as your neighbor makes her all the more affecting, even when you normally would want to shake someone up and tell them to snap out of it.

Timothy Mark Davis exudes the sense of a loving husband who feels helpless to aid his wife’s mounting anxiety. Alex Alvarez smoothly portrays the male characters in Christine’s delusions. Maha McCain’s varied roles include an old friend who Christine accuses of “You came here to see how I measure up.”

Despite the theme of mental illness, the Miami playwright certainly drowns the audience, much as Christine feels, in the suffocating array of birthing and parenting enclosure that demand a couple engage in for the health of their child: a library full of books, charts to be filled out, regimens to experiment with, and a glossary of terminology that should earn parents their own medical degree.

Further, she limns the distinct difference between the socially lauded dream of having a baby – reaching back to childhood — and the reality of coping with the demands of actually caring for an infant.

Christine is waxing nostalgic to her school chum Heather in a speech that will come back to haunt us:

CHRISTINE: I had dozens of different dolls. I’d bathe them and change them. I had one that I could even feed with a spoon. Do you remember that one? Baby Alive or something like that.
HEATHER Was that the one that pooped runny yellow crap?
CHRISTINE Yes! My favorites were the ones with lidded eyes. They would click closed when you laid them down. Click. Click. Click. I would lay them in a row and swaddle them all together in the same blanket. Wrapped tight all the way around. Perfect sleeping angels.

The work in development for four years has been shepherded on and off by Theatre Lab, including being featured at its 2020 New Play Festival. It’s a growing trend here. Several regional theaters in South Florida such as Palm Beach Dramaworks have already presented and plan to continue presenting new works this season. Theatre Lab has just announced its next season, which is nothing but works getting their world premiere.

Overactive Letdown runs through April 10 from Theatre Lab, performed at the FAU campus in Boca Raton.  Performance times are 7:30 p.m. Thursday-Saturday, 3 p.m. Sunday.  Running time is 1 hour 30 minutes with no intermission. Tickets are $17-$40. For more information and tickets, log onto https://fauevents.universitytickets.com. Or call (561) 297-6124

Covid policy: All patrons regardless of vaccination status are expected to wear masks while indoors in any FAU facilities