Report From New York: A Poignant Slice Of Small Town Dreams In Waitress 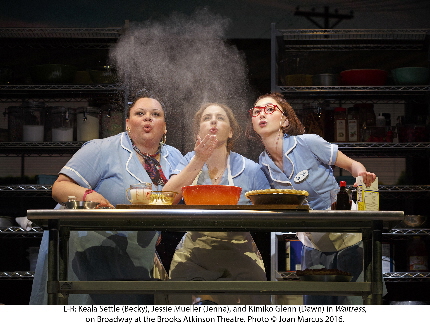 Keala Settle, Jessie Mueller and Kimiko Glenn breathe life and flour into their dreams in the musical Waitress / Photo by Joan Marcus

With major exceptions, stage adaptations of screen roles are notoriously unsatisfying, especially when they are turned into musicals. And the film Waitress summons up cringing expectations of dancing ensembles chorusing endlessly about the many type of pies: “There’s peach and coconut…”

But the creative spirits connected to Waitress the musical are far smarter than that.

While the production at the Brooks Atkinson Theatre faithfully follows the schematics of Adrienne Shelly’s charming 2007 film, it does exactly what a musical should do: use the added tools of melody, lyrics and dance to amplify, augment and dig deeper into the human condition in ways that declaiming lines from a script cannot do, no matter how deft the thespians.

Not only is this quietly buoyant tale of small town denizens seeking fulfillment receiving praise from critics, but word of mouth among audiences has fueled sold-out houses even though it lost in every Tony category, though it has no nationally known stars and no one is rapping about taking their shot.

The material is so promising that the producers took the unusual step of announcing hours after opening night that it would tour in the fall of 2017. That’s confidence.

But Waitress has many virtues going for it, chief among them the affection so many people have for Shelly’s film about an intelligent, resilient small town waitress with a genius for pie-making who is married to a repressive abusive husband, who finds romance with a gynecologist and who must cope with an unwanted pregnancy.

There’s also an insightful score by Broadway neophyte but popular singer-songwriter Sara Bareilles delivered by a fine cast including Tony-winner Jessie Mueller giving a more nuanced and affecting performance then she did in her Tony-winning turn as Carole King in Beautiful two years ago.

But the secret weapon is the tone established by that score, Jessie Nelson’s deft adaptation of the Shelly’s script, sprightly choreography, and the direction by Diane Paulus.

With warmth and compassion, this Waitress is devoid of the slightest condescension toward the characters and milieu, even the most eccentric and slightly cartoonish denizens. No one imbues a rosy haze to the downsides of these lives nor are they subtly overpraising the virtues of the simple life, although there’s a whiff of musical theater fairy tale. And yet, the feeling is that most of these citizens are just good, decent people with powerful yearnings that are universal.

In the film, the inner thoughts and feelings of star Keri Russell and a fine cast were depicted from the outside; it was only the fine acting and direction that fleshed out what Shelly’s screenplay aimed for. But in musicals, we get to see and hear the inner thoughts and lives expressed. Sometimes that’s overkill, but here it brings out the loveliness, the loneliness and the humanity of these characters.

The plot focuses on Jenna (Mueller) an early 30-something woman supporting her ne’er do well husband Earl (Nick Codero) by waiting tables at the diner that doubles as the community’s nexus. The diner’s strongest bragging point is the seeming endless parade of Jenna’s pies, a talent she learned from her dearly-missed mother, confections with names like humble crumble rhubarb pie or devil’s food oasis pie.

Her marriage has gone dry but Earl refuses to let her have a car that he intuits will allow her to escape, even refuses to let her compete the region’s pie contest because the prize money and resulting self-confidence would allow her to leave him. She commiserates with her colleagues Dawn (Kimiko Glenn) and Becky (Keala Settle) who have their own relationship issues.

But Jenna begins an affair with the new young ob-gyn Dr. Pomatter (Drew Gehling) and becomes pregnant, a condition she frankly does not know what to do about. How this sorts itself out makes for a lovely discovery of self-worth and independence. Granted, in the film, the turning point near the finale is perfectly believable, although it’s not quite so credible on stage.

But it’s nearly impossible to fail to fall in love with Mueller’s appealing Jenna, her buddies who have fine clarion voices who get their own “I am” numbers and Christopher Fitzgerald (Shrek and Spamalot) as Dawn’s besotted swain Ogie. And when the three woman sing together in harmony it’s aural equivalent of watching sugar and butter stirred into a scrumptious batter of mutually supportive sisterhood.

Still, it’s that even-handed tone: Most of these people wistfully dream of a more fulfilling existence. They people know that life is not what was promised, let alone what was dreamed, or even what parents hoped for them. One character says, “I haven’t felt anything in a very long time” and another responds to the query are you happy: “Happy enough; I don’t get much; I don’t give much.”

The quiet disappointments that life seems to have for you and everyone are an unchallenged and accepted fact of life. Which is what makes everyone’s Act II victories bittersweet or unalloyed so uplifting.

Paulus, known for more flashy stylistic productions such as the reimagined Pippin, reins in the showmanship except in the production numbers. With choreography by Lorin Latarro, Jenna escapes the pain of her life by going to the kitchen of her mind to whip up her next dream pie. Ensemble members dressed in black drop ingredients into her waiting hands as if they appear by magic. It is so precisely and crispy executed that it is illustrates how stagecraft can use its own vocabulary to substitute for screen magic. Some people, including my seat mate, thought this didn’t gel with the rest of the show, but I fell for it.

Mueller, it should be no surprise, is terrific. She is not as gorgeous as Keri Russell, but it took all of Keri’s considerable talent to make it believable that she was a small town blue collar waitress. Jessie, who is in her own way unconventionally beautiful, is credible from the first moment with her pony tail and her slightly off kilter features.

There’s only one serious misstep: In the film, Earl was not intentionally evil, he was an unreconstructed chauvinist who was cruel, thoughtless, controlling, commanding, and did so with a thoughtless blitheness that was both convincing and chilling in his blitheness. But Paulus lets this Earl say all the same words but lack that chilling baseness. When the film Earl says “You’re the first person who ever belonged to me,” the use of the word “belonged” chills the blood. Not here. He’s just pathetic. This robs the woefulness of Jessie’s plight.

But you can see for yourself how tasty this confection is when you visit New York or when it tours near you in 2017-2018 season.