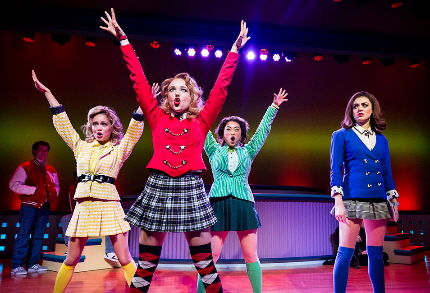 See the list of previously reviewed shows at the bottom of the story, including The Bridges of Madison County, Satchmo at the Waldorf, Mothers and Sons, Violet and All The Way.

“Heather, my love, there’s a new sheriff in town.”
–Veronica in Daniel Waters’ screenplay for the film Heathers.

Coming to a theater near you in South Florida within a year or two – if it takes even that long – is Heathers: The Musical.

It is closing off-Broadway August 4, but it is destined – you read it here first – to be a ubiquitous hit across this country whether it’s mounted by companies like Slow Burn Theatre encouraging a younger audience or even drama departments in progressive high schools.

Droll, acerbic and so smart, it is a stunningly successful riff on the jet black satirical film that mercilessly skewered the socially-conscious class system of high school by positing outsiders who literally kill their tormentors.

But where the Michael Lehmann movie took a recognizable reality and pushed it to absurd but logical extremes, the creators of this hit acknowledge that there is nothing remotely real about a musical comedy. So with tongues sticking through their cheeks, they embrace the fantasy of high schoolers breaking into song – a very dark, nasty and R-rated version of Grease and Glee. And somehow it works perfectly.

The film had a hysterical moment when a straight-arrow father is mourning his thuggish goon of a son who has died under circumstances that imply he was living in the closet. Dad blurts out a surprisingly impassioned one-liner, “I love my dead gay son,” a funny indictment that homophobia isn’t so immutable when it’s someone you know.

In the musical, the set-up is the same, but the line is just the intro to a hilarious production number as two grieving macho fathers are joined by the whole high school. It’s a solid hoot.

The show is set in Westerberg High, a cartoonish Buffy the Vampire Slayer brand of hell with a cruel strict caste system in which who you are forced to have lunch with is a profoundly effective threat.

Veronica Sawyer is an intelligent, witty misfit who longs to be accepted by the school’s Brahmin, a trio of privileged snooty blow-dried teens all named Heather. They sense a fawning acolyte to abuse; so they test her willingness to conform by pressing her to torture her overweight childhood friend.

But Veronica’s surrender is rebuked by the new kid in school, the black trenchcoat-wearing and sardonic J.D. whose sexy disaffectedness sugarcoats a nihilistic and homicidal streak. Eventually, they are thrown together and their classmates start showing up dead when the misfits rebel against the tyranny of the ultra-conformists.

Frankly, most spoofy musicals aren’t half as funny or smart as they think they are. Most are pretty ham-fisted and indulgent in a self-congratulatory tone that sees endorsing anarchy as the ultimate expression of cool. This theme works pretty well on film for some reason, notably one of my favorites, Animal House. But they fall flat on stage if you can’t plug in memories of the film – suggest any number of titles here.

Heathers: The Musical is different because it both honors the source, but also embraces the tropes of theater. The score is by Laurence O’Keefe (Legally Blonde), with Kevin Murphy (Reefer Madness) providing book, lyrics and some of the music. It’s all blissfully inspired. Just gander at the song titles: “Freeze Your Brain” or “Dead Girl Walking.”

Fans of the film will be cheered to know the musical hits all of the film’s high spots and gleefully touches base with its catchphrases such as “What’s your damage, Heather,” “My teen angst bulls**t has a body count” and the deathless “F**k me gently with a chainsaw.”

The 1989 film was a mirror of the social mores of its time. Now a quarter-century later (a quarter-century!) the musical takes license to happily lampoon a bygone era. One Heather derides her classmate’s problem: “Bulimia? That’s so 1987!” – a line that is even funnier in 2014 than it was in 1989. And the script is consciously lathered with kitschy cultural touchstones, like citing the moronic film Red Dawn, the pop novel Patriot Games and invoking lines like “I feel like Bono at Live Aid.”

When we saw the show this spring, much of the crowd was 40-somethings to 50-somethings who had loved the movie. But a large portion was too young to know anything but the title and who were attracted by word-of-mouth about themes as timeless as Aristotle being bullied in school.

Unlike the film, the musical has one other unspoken theme that makes it relatable to any audience member: Every human on the face of the planet was secretly insecure about something in high school. Every single person. So the malicious snobs, the sadistic jocks, the hapless nerds, the clueless adults, everyone here harbors a secret anxiety.

The music is peppy period perfect with blistering rock production numbers rock and angsty ballads, all of which the writers and actors deliver with a cross between a secret smirk and compassionate empathy.

Warning: This show is not appropriate for anyone under bar mitzvah age. The substance is uninhibitedly profane and awash in more sex than a gymnasium bathroom stall at the prom. For instance, two football players threaten to have oral sex with a victim with the prospect of “a sword fight in your mouth.”

The show began its run at New World Stages last March, so some of the leads have graduated to other assignments. But this production is worth catching ASAP because director Andy Fickman and choreographer Marguerite Derricks have nailed the tone that they doubtless have inculcated in any replacements.

Their staging is ingenious such as having the three Heathers stride into the cafeteria for their big entrance – flanked by the rest of the school holding cafeteria trays above them in an arch and emerging from the kind of fog usually reserved for the conquering football squad. The three Heathers often sing their imperious trios in classic Supremes formation with chief Heather Chandler standing out front in the Diana Ross position.

But if you don’t see it in New York, don’t fret. It’s just a matter of time before Veronica, J.D., the Heathers and the student body of Westerberg High will appear within easy driving distance.

This entry was posted in Performances, Reviews and tagged Heathers: The Musical, Kevin Murphy, Laurence O’Keefe. Bookmark the permalink.