Report From New York: The Real Thing Remains A Puzzlement 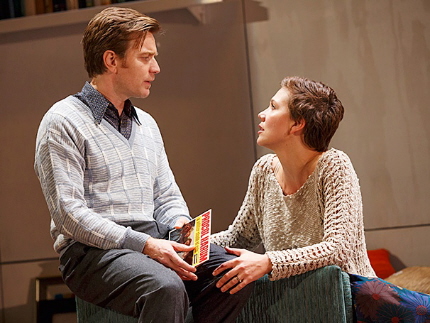 Few playwrights can make you feel stupider than Tom Stoppard whose plays are jammed with non-stop witticisms and dense ideas flying past in a Byzantine tangle at 127 kilometers an hour, such as Arcadia and Rock n’ Roll, the latter which would make any Ph.D. feel lacking.

But his play about the war between head and heart in romance, The Real Thing, is reputedly his most accessible. Yet each individual audience member’s ability to connect (or not) with a piece of art is notoriously variable and subjective regardless of the quality of the work or the intimidation of its widespread acclaim.

Which brings us to the Roundabout Theatre Company’s starry production of The Real Thing coming to a close in New York next month, but ripe for revival in South Florida soon.

Point is: I didn’t get it. I’ve never gotten it. This production is my fourth contact with the work in various media and this edition directed by Sam Gold made more sense than any previous one, but it still doesn’t land solidly for me. I feel stupid or emotionally stunted. My date at my first viewing in 1985 said afterward about my lukewarm reaction, “You’re one of the most romantic men I know! How can you not get it?”

Maybe it’s because for all Stoppard’s brilliant verbiage (it has one of the best speeches ever about the sanctity of words) it’s a badly flawed play in which key emotional conversions occur between scenes. It’s also hard to root for a couple of blithe adulterers even though they are played here with endearing and winning personas by the attractive Ewan McGregor and Maggie Gyllenhaal.

The plot posits that the clever middle-aged British writer Henry (McGregor), who is indeed the smartest and wittiest person in any room, leaves his brittle but devoted wife Charlotte (Cynthia Nixon) for the lovely and charming actress Annie (Gyllenhaal) who is married to his friend, the architect Max (Josh Hamilton). This leaves his teenage daughter Debbie (Medline Weinstein) caught between her parents.

At some point, Annie gets involved in supporting an anti-nuke protest in which a coarse prole named Brodie is arrested. She champions him in prison and asks Henry to rewrite Brodie’s political autobiographical play. Then Annie becomes intrigued by the actor playing Brodie in the subsequent production they star in. Henry gets insanely jealous. What is likely meant to happen is that Henry, who has had a somewhat cerebral interpretation of ardor, finally connects with the agonizingly emotional component when he fears he might have lost Annie.

One problem with Stoppard’s set-up is that our hero and heroine heedlessly jettison anyone or anything that might interfere with their selfish desire for true love. They exhibit not a shred of concern for who they might hurt, as if the purity of their love justifies their abrupt betrayal – not folks you want to get into a relationship with.

Another problem is the entire subplot of Annie’s relationship championing with Brodie. It’s relevance to the theme escapes me other than perhaps to illustrate a crush on his part that is not the real thing.

Finally, the last few scenes – with significant passages of time occurring between them – are missing huge character developments. Like Othello suddenly becoming murderously jealous offstage, Henry inexplicably and with no dramaturgical warning slips from his intellectual pursuit of love into a viscerally painful torment at the possibility that Annie is having an affair – pretty cheeky when you think that he and Annie were doing precisely what he fears she is doing with a handsome actor.

The cast, better known for their big and small screen credits, acquit themselves well, especially McGregor who delivers that yin-and-yang of intellect and emotion with a surprising amount of persuasiveness given the wide gulf between the traits. His long one-on-one explaining to his daughter his vision of love is as effective as I’ve seen it done.

Gyllenhaal is alluring and intriguing enough to explain Henry’s attraction. Nixon does a fine job as Charlotte, although it’s not a particularly stunning rendition. I do remember seeing her daily shuttle between this play as Henry’s daughter and the waif in David Mamet’s Hurlyburly back in 1985. Hamilton is credible as Max, with Weinstein actually coming off the best as the wise-for-her-years but affectionate daughter. There’s even some chemistry among all of these people that supports the idea that they have all known each other for quite some time, although again, it all feels viewed through muslin.

Gold has done what he can with the script problems and invested the production with his own touches. For instance, Stoppard, a pop music fan from way back, imbues the same mania in his hero who makes frequent references to it in his banter. But Gold has underscored this by having the actors croon classic rock love songs of the 1960s while minimal changes in scenery demarcate change in location and a passage of time. It’s an admittedly diverting conceit that doesn’t illuminate anything other than emphasize that this is occurring back in the 1980s.

Perhaps if I keep watching and reading and listening to it, The Real Thing will finally resonate with me as satisfying piece of theater. It took me seven viewings of Angels In America in various media before seeing one that finally delivered what this legendary piece was reputedly capable of.

Should The Real Thing be revived in regional theaters in Florida and elsewhere? I may be the wrong person to ask.