Report From New York: Seaworthy The Last Ship Shouldn’t Be Allowed To Sink 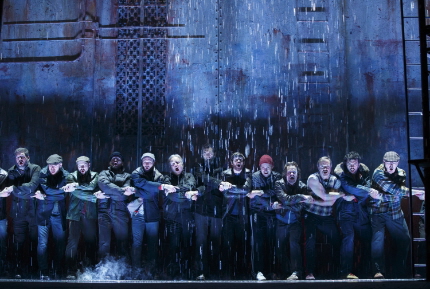 Back in the day, whenever that was, a Broadway musical that had a raft of virtues but wasn’t a perfectly satisfying piece had a good chance of running an entire season. But with astronomical running costs and ticket prices, such survivals are rare these days. The Last Ship is currently a test case whether that paradigm is still possible.

The admirable work has been taking on water with potential audiences deterred by the prospect of a blue-collar depression tale. It remains afloat because its composer Sting has generously stepped in for a turn in a supporting role as it tries to tack the winds just enough for Tony nominations.

It’s sad because The Last Ship, while hardly a home run, deserves a better reputation. This is a traditionally-crafted musical with an uplifting finale, mostly well-executed and competently performed, delivered by some of the most talented people working on Broadway.

The premise sounds about as promising as a boy dreaming of being a ballet dancer in a British mining town during the Thatcher Era. Here, Gideon Fletcher is a disaffected young man who left his estranged father and his shipyard hometown in northern England years earlier. Called back from his life as a merchant sailor by news that his father is dying, Gideon arrives too late. He also finds the town’s shipyard about to close, sending the entire town into a spiral of economic and spiritual depression.

Led by the irascible Father O’Brien and the former shop leader Jackie White, the men decide to illegally occupy the shipyard and build one last ship. Gideon is struggling with several bits of unfinished business beginning with unresolved strife with his father and ending with former girlfriend Meg and her out-of-wedlock son. Suddenly, the quixotic ship project provides him a way of coming to terms with much of his past.

All this is outlined in justifiable if broad strokes by book writers John Logan (Red) and Brian Yorkey (next to normal). Some people will feel that makes it universal and accessible, some may feel it’s too obvious. You know how the plot will arc at almost every step, or at least not be surprised by anything, so it’s not a spoiler to say that the ship is built and sails in the end against all odds, a triumph of the human spirit.

But at the same time, the representative finale is so well achieved by veteran director Joe Mantello (Wicked), choreographer Steven Hoggett (Once and Black Watch) and a team of scenic and special effects masters that the result is stirring.

Perhaps it’s being curmudgeonly to note that the whole thing is ludicrously improbable. Even if you buy its plausibility during the soaring last 15 minutes, it’s almost impossible to keep at bay the quixotic impracticality 10 minutes after the curtain goes down. But it’s ridiculous that Professor Higgins could pass off Eliza as a duchess, either.

But credit Mantello and everyone else for creating a faithfully autumnal chill of the soul pervading this town that could just as easily be Detroit or Gary. He, Sting, Logan and Yorkey have constructed a world with no discernable future, making the strained bonds among neighbors, relatives and colleagues the sole remaining precious blessing.

Sting has been a stage actor on occasion, so stagecraft is not foreign territory. His score provides both the strongest and weakest parts of the production. The Sting-like songs, many of them poignant ballads and stirring anthems with lovely melodies, are earnest, insightful cross-sections of the heart since some of the show is drawn loosely from Sting’s own roots. Some lyrics sounded painfully simplistic, but these folks would not be spouting Sondheim tongue twisters.

But there are songs that were clearly ordered up by the book writers and director to fit the dramaturgical needs of the show. These have an artificial, pragmatic feel that doesn’t fit the rest of the score. You can hear the creative team saying, “Gordo, buddy, we need a rousing tavern drinking number here,” or “How about a wry and witty father-son bonding number between the hero and the teenager who might well be his own.” Some of these numbers clank about like rusty anchor chains on deck.

At least, unlike Elton John in Aida, Sting was intimately involved on site creating a score that is smoothly feathered-in, although he obviously owes a debt to musical director, orchestrator and arranger Rob Mathes.

The cast was reasonably strong starting with Michael Esper as the prodigal son, Rachael Tucker as the woman left behind and veteran character actor Fred Applegate as the feisty parish priest. Sting had yet to replace the crusty weathered Jimmy Nail (Evita on film) when we saw the show. Some folks missed notes and the thick accents obscured some of the lyrics, and there was some Rex Harrison-like sing-speaking for performers unable to negotiate the score. But all that generally that leant some verisimilitude to the proceedings.

Mantello is a past master of staging musicals, but Hoggett was equally invaluable with his endlessly inventive dance steps that encompass plenty of men stomping their feet and slamming down their toolboxes to create an environmentally true percussive sound.

Despite the discomfort of watching people whose way of life is inexorably evaporating before your eyes, The Last Ship honors the eternal pride and humanity that its creators hope prevails over temporal woes.
Reviews of other shows we saw in New York:
The Country House click here