Report From New York: You Can’t Take It With You Still Celebrates The Free Spirit 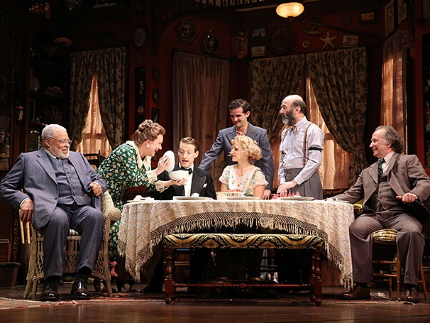 The reputation of some classics have been unfairly damaged by ten too many productions by well-meaning high school and less talented community theaters, especially comedies. Just because a script is well-crafted doesn’t mean it’s invulnerable. Sometimes it’s much harder to pull off than it seems and it takes experienced professionals to find that perfect groove. Witness Palm Beach Dramaworks’ fine production this season of the oft-manhandled Our Town.

So it’s intriguing to note that the warhorse You Can’t Take It With You – a perennial favorite of high school drama departments almost since its 1936 bow on Broadway – is not so easy to pull off as you’d think.

Director Scott Ellis’ current production playing through the winter at the Longacre Theatre features some inspired performances (and some surprisingly disappointing ones) in a production with a sagging first act completely redeemed by two acts of jocularity if not hilarity. It takes a skilled group of pros to pull this off.

Fortunately, Ellis has melded the talents of a skilled ensemble of clowns luxuriating in this delightful silliness about a very extended multi-generational family of blithe eccentrics pursuing an assortment of dreams. Their laissez faire approach to life jostles on occasion with an outside world foolishly bent on pursuing class and cash as if they had worth. If you have to ask what the plot is about, you’re on the wrong website.

For all the considerable laughter, playwrights Moss Hart and George S. Kaufman celebrated even venerated American individualism, eccentricity and non-conformism. It’s fascinating that this play bowing during the depths of the Depression has thrived as almost a pipe dream of anti-establishment nose-thumbing through decades of unbending orthodoxy including the corporate mentality of the 1950s and 1960s, and today’s Tea Party conservatism (although the hero doesn’t believe in income tax). Also, keep in mind that many of the people viewing this in New York paid three digits for a ticket. Not exactly preaching to the choir.

This is a classic Broadway show meaning it has three acts and two intermissions spread over 2 ½ hours. More crucially, the first act involves leisurely exposition and the introduction of a large number of diverse and distinct characters, representative of a time when ADD was not a society-wide ailment. Frankly, Kaufman and Hart and Ellis only aim to charm you in that act, not leave you in paroxysms of laughter. But that changes in the second and third acts when the humor quotient rises every few minutes as the Vanderhof clan collides with the one percenter family whose son has fallen in love with the Vanderhof granddaughter.

The large cast is generally fine with some delightful work, especially by Kristine Nielsen playing another of her daffy ladies in Penelope who dives headlong into a series of pursuits only to switch to a new one or even an earlier one when the spirit moves her. It’s Nielsen, frankly, whose bubbly bonhomie carries the audience through the subdued first act.

There’s also lovely work by Mark Linn-Baker as the firework inventor Paul, with Reg Rogers and Julie Halston stealing nearly every scene as the Russian émigré ballet teacher and as the eternally besotted third-tier Tallulah wannabe.

But they can only be indicted for petty larceny. The grant theft charge goes to Elizabeth Ashley who glides into the third act as former Russian royalty trying to balance her inbred grand manner and the pragmatic requirement of working as a waitress. She’s almost worth the price of the ticket herself.

The considerable disappointment, at least at the matinee we saw, was James Earl Jones as the patriarch, Martin Vanderhof. Jones has been a mountain of power in theater for decades from The Great White Hope to Othello to Big Daddy to the President in the recent The Best Man. Here he coasts. It’s not that the part calls for passion or power or brio; Grandpa is a gentle soul. But he is a vibrant creature savoring life, at a minimum exuding a winning charisma. Here, Grandpa’s charm is almost subterranean, consigned to basically a smile and a twinkle in the eye. Ellis should have insisted on more.

This is Broadway, so in addition to the hefty personnel expenses, the producers have splurged on a breathtaking set by David Rockwell (and a crackerjack props team). The two-story living room with an accent on the “living” is chock-full of the detritus of decades of hobbies, avocations and leisurely pursuits, as idiosyncratic as its denizens. Additionally, and this is almost profligate, the whole room is on a turntable so that the exterior of the house can be exposed – itself a charming manse lost in the less welcoming neighborhood.

Reviews of other shows we saw in New York: