Seeking A Path Through The Past In Redwood Curtain 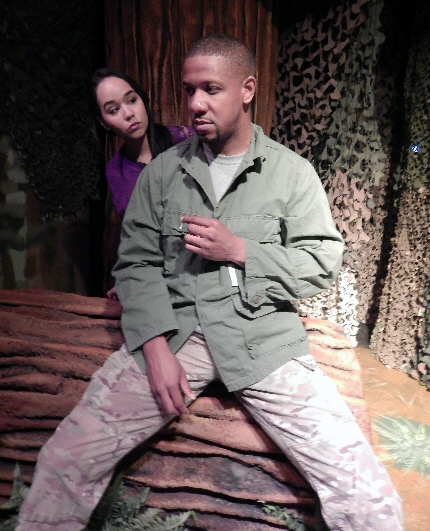 Contrary to poets and playwrights, the past is not actually in our DNA other than congenital genetic pre-dispositions. But Lanford Wilson’s wistful and whimsical play Redwood Curtain postulates that the past we stock our psyche with becomes something integral to our being that has to be faced down if we are to move beyond it.

The 1992 play about an Amerasian teen seeking her father in a forest harboring Vietnam vets gets a well-intentioned outing from the fledgling Primal Forces Production under the direction of Keith Garsson. It’s an intriguing evening that starts the brain cogitating, but as theater it doesn’t land solidly as it hopes.

Redwood Curtain is the third Primal Forces piece in its freshman season focusing on the aftermath of the counter-culture and the tumultuous 1960s. It was a late career work by Lanford Wilson, responsible for Tally’s Folly but closer to the theme The Fifth of July. Garsson deserves praise for choosing this quirky thought-provoking piece, but this difficult work is never quite satisfying.

The play opens in the depths of the titular forest with a deafening cacophony of gunfire echoing from some past war, followed by the entrance of a hermit in begrimed battle fatigues roaring out to his dog with an equally deafening voice like a chainsaw.

Lyman (Ethan Henry) has retreated here (like apparently thousands of other Vietnam vets in real life) to the sanctuary of these woods in northern California.

His separate peace is upended by a chatty, nervous but overly-friendly 16-year-old girl (Amarie Lee) who claims various names and backstories, some true and some inventive lies. But she is a city girl not dressed for a night out in the woods.

Her chirpy verbal tsunami overwhelms him. He cannot process the world around him; his life of hunting, eating and sleeping is all he can cope with. The girl whose name really is Geri is far beyond his ability to handle.

It turns out that she has been trailing him since he made an appearance on the nearby highway. In fact, Geri has been tracking homeless men in the forest during her last four summer vacations, visiting her aunt who owns much of the timber land. Geri is looking for her GI father who got her mother pregnant in Vietnam and then returned home. The baby was later brought to America by her mother and sold to a wealthy couple.

Geri quickly evidenced two talents: a prodigy’s world-class gift for classical piano and a nebulous but genuinely magical talent for such things as bringing on changes in the weather.

What ensues is Geri’s crusade to determine if Lyman is her father – not as crazy as it initially seems – and the efforts of her witty, warm and acerbic aunt Geneva (Laura Turnbull) to keep her from getting emotionally hurt and help her negotiate the rapids of teenage rebellion.

But what Wilson depicted and Garsson brings out well, besides the plight of the returning war veterans, is how the past shapes us but also questions how much we should let it do so. When Geri finds the truth behind the truth behind the truth, it frees her to a degree. But Wilson also says we have to shake off the shackles of the past if we are going to live a full life in the future.

The late playwright was at heart a quirky writer with deep compassion for his wounded struggling characters, notable in his first Broadway success, The Hot l Baltimore. Giving Geri undefined magical powers is a bit of a whimsical stretch, but this is theater not naturalistic film. He also wove in a simultaneous concern over jettisoning too much of our past: Geneva’s family has owned and responsibly logged this forest of millennia-old trees for more than a century, but she is selling it to companies that will likely strip it bare.

To be blunt, the weak link here is the most crucial element to the play’s success. Geri has to be preternaturally bright and talented, simultaneously winning and irritating as any teenager will be, falsely believing that she is hiding the angst inside. Above all, she has to be believable. Ms. Lee is likely a nice person to have a drink with and she has some credits in a TV series, commercials and stand-up comedy. But this role is outside her skill set yet; she doesn’t have the stage-based craft for a role this deceptively challenging.

Emblematic of this, the long first scene has Geri peppering Lyman with a non-stop barrage of character-defining verbiage, some of that produced by nervousness. But Lee is just saying lines, albeit with commendable energy and aural agility. Only in the last third of the play does Lee finally become somewhat credible.

Conversely, Turnbull once again elevates anything she appears in. Her immediacy living inside a part is dazzling. It takes her a while to get this show’s engine revving, but once she finds the groove, it is Turnbull who actually drives the production. You can actually see her intensity lifting up the quality of Lee’s performance.

Henry, who has been downright brilliant in recent work, is more of a disappointingly blunt object here which is partly the role that Wilson wrote. It’s difficult to find and play levels of subtlety for a character whose brain has been cauterized. Henry’s Lyman roars like a fierce feral bear, stumbles around like a blind man trying to keep from bumping into something hurtful and looks lost in any situation involving other human beings.

The stage is genuinely smaller than your living room and it doesn’t give Garsson much room to move around his actors, so they mostly stand or sit for most of the evening.

But one element is outstanding by any yardstick: Tim Bennett’s set design (built by Bombshell Productions) is as evocative and inventive as anyone could ask for, regardless of resources. He creates the aging massive tree trunks of the forest, subtly backed by what initially seems like foliage but actually is military camouflage netting. Foliage is even painted on the floor of the stage. We won’t give it away, but he ingeniously designs ways to change the scene to a car, a coffeehouse and Geneva’s well-appointed music room.

Primal Forces is a boutique theater of sorts operating in the tiny venue at Andrews Living Arts, a former auto mechanic garage just north of downtown Fort Lauderdale. Primal Forces’ founder Garsson is also the artistic director of the Boca Raton Theatre Guild, which mounts more mainstream shows for its older, more tradition-affirming audiences. Primal Forces mounts thought-provoking even edgy plays that feed his artistic soul. With modest budgets, he produced a stunner in the most recent work, Sunset Baby, a triumph that earned Makeba Pace a Carbonell nomination and also starred Henry and John Archie.

Side note: Twenty-three members of Broward County’s Veterans of Foreign Wars Post 8195 recently collaborated on a book titled Post 8195: Black Soldiers Tell Their Vietnam Stories. The entire proceeds from the play’s opening night performance and reception as well as a percentage of the funds generated by all Redwood Curtain ticket sales will be donated to Post 8195; the book will be available for sale at Andrews Living Arts during the run of the play.

Redwood Curtain from Primal Forces Productions in association with Andrews Living Arts runs through May 3 at 23 NW Fifth Street, Fort Lauderdale. 8 p.m. Thursday– Saturday, 2 p.m. Sunday and on Saturday May 2. No 8 p.m. show April 25. Running time 90 minutes with no intermission. Tickets $25 ($12.50 for veterans).Tickets through www.primalforcesproductions.com or call (866) 811-4111.