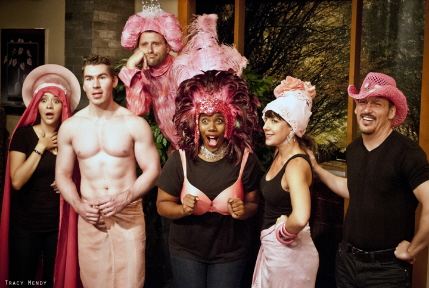 So the Cowardly Lion walks into a gay bar….

That premise pretty reliably lets you know that you must be watching the new edition of Shorts Gone Wild 2, the mildly risqué festival of short plays with a LGBT underpinning.

There’s also a genuinely naked monarch from Hans Christian Andersen’s The Emperor’s New Clothes, a woman who emails out a naked selfie on the night before her wedding, a transgendered man hooking up with an old lover and a clutch of rabid Bette Midler fans at her last performance in a bathhouse.

This is the second annual collaboration of City Theatre, which produces the annual Summer Shorts in Miami, and Island City Stage, the LGBT-centric company in Fort Lauderdale. As we’ve ranted before, writing short plays is a surprisingly difficult and underrated task; there are usually one or more entries in any play festival around the country that don’t measure up.

This edition strikes us as more consistent than last year’s inaugural effort, although there often seems to be less meat there than you hunger for. But the uniformity of quality is an asset because, once again, the evening opens up with a particular piece, but the order of the rest of the seven playlets is chosen by picking numbers out of a hat (although we’re a tad suspicious that the last one chosen has the entire cast in it).

Almost all the plays have overtly LGBT and sexual themes (not the same thing) but they are still comparatively tame for an open-minded audience. In fact, most of them may have a gay-related premise, but comedies and dramas alike usually have a central thematic nugget about relationships that may be complicated by society’s attitudes, but are not much different than those of straight couples.

Again, a repertory group of six actors with unflagging energy and charm throw themselves in a brace of eight plays written by local and out-of-town playwrights and helmed by local directors.

If you don’t look at the list of characters in the program, it may take a couple of minutes for the premise to sink in. But when it does, it’s a rewarding set up and follow-through: Ben (Larry Buzzeo) and Frank (Craig Moody) run into each other at their high school reunion. They only trade surface chit chat and Ben doesn’t exactly acknowledge that he recognizes Frank; Frank doesn’t push it, but he keeps trying to get Ben to connect. In fact, I’m not sure they ever do. But standing behind them are their alter egos, Ben’s (Matt Stabile) and Frank’s (Gladys Ramirez).

Right. Frank has had a sex change operation and was Ben’s lover in school. The alter egos articulate the painful emotions that the taciturn men cannot utter: Frank’s feeling rejected for Ben’s current snub, Ben’s bafflement at Frank’s choice and extreme embarrassment at their previous relationship. This is not played for laughs; instead their paralysis stands in for the discomfort that much of society has in coming to terms with transgendered people, even as it accepts homosexuality.

Local playwright and actor Michael McKeever penned the funniest piece of the night, Lion in a Bear Bar, directed by Michael Leeds and featuring a hilarious performance by Larry Buzzeo as the ultimate Friend of Dorothy, the Cowardly Lion. The premise has the Lion – complete with shaggy mane, tail and Bert Lahr persona – squabbling with his lover Matt Stabile in a gay bar.

Game On, written by Gary Garrison, co-executive director of The Dramatist Guild, finds two men at the end of fizzled out first date. Stabile cannot connect with Buzzeo because – and Buzzeo has to drag it out of him – Stabile is put off by Buzzeo’s fey affect (which is pretty mild actually). Stabile wants a date who can pass for straight, a painful analog to any group that denies who they are.

Glamping, written by New Yorker Carey Crim and directed by AAPACT’s Teddy Harrell, posits lovers Moody and Ramirez on an upscale camping trip to celebrate the wedding of the woman’s former lover, also a woman. Amid the humorous banter, it explores the difficulty when someone in a heterosexual relationship tries to come to terms with their partner’s previous homosexual relationship.

McKeever’s second piece of the evening, Sarah Stein Sends A Selfie, directed by Margaret M. Ledford, begins with a wry premise: Sarah (Niki Fridh) wakes up hung over on her wedding day. Her best friend (Gladys Ramirez) slowly alerts Sarah that in her drunken state the night before, she sent Gladys’ mother a naked selfie shot in front of a Starbucks – among other indiscretions. What becomes clear is that Sarah is not quite comfortable with her impending nuptials to a man; she had a profound romance with Gladys which may not be quite in the past. To watch someone deny their sexuality and conform to mainstream society’s constraints is depicted with compassionate sadness.

The Emperor is Naked is a weird little curtain raiser written by Leeds and directed by Ledford in which the cast assembles to put on a risqué riff on the fairy tale, but which keeps getting delayed to the chagrin of Moody who is indeed naked and constantly seeking imaginative ways to cover his privates.

A Bump Between Friends, written by Fielding Edlow and directed by Gail S. Garrisan, is a so-so piece about two old friends meeting for lunch so that Fridh can inform a bisexual buddy (Renee Elizabeth Turner) that she’s going to have a baby – fathered by Turner’s old boyfriend.

Closing the opening night slate was The Last Time I Saw Betty Bathhouse, by local writer and arts supporter Tony Finstrom and directed by Garrisan. It’s a memory piece flashing back to the early 1970s when Bette Midler gave her last concert at a gay bathhouse – the kind of venue where she made her initial reputation for an adoring fan base.

We never see the Divine Miss M; the play drolly if affectionately focuses on the anticipation among a group dressed in shocking pink in Halloween costumes, supposedly as their favorite Broadway musical character. The regular denizens are bemused to see celebrities and straights pretending not to acknowledge their surroundings in order to see this watershed in the career of the hot new star. The play isn’t as insightful as the previous entries, but it does exude a warm glow of nostalgia as it catalogues familiar types and an out-there comfort level that marked the beginning of the gay liberation movement.