Singing Their Hearts Out Over Last Five Years At Evening Star 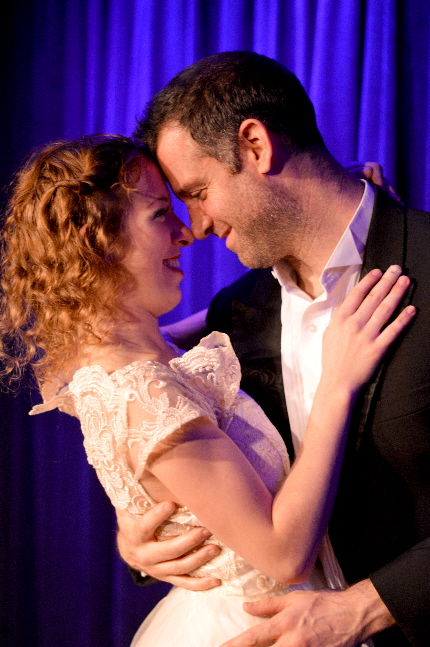 One of the joys of Facebook is that you can see at any moment, almost God-like, the entire sweep and variety of human experiences occurring at precisely the same time: births and deaths, weddings and divorces, the swirling yin and yang of existence.

Evening Star Production’s fervent mounting of Jason Robert Brown’s cult musical The Last Five Years does the same thing with infinite compassion for the eddying gain and loss in one of the most intriguing constructs in musical theater.

To spell it out, in the first scene, the woman receives a breakup letter and is devastated – because it’s the end of the relationship. In the second scene, the man is exultant over his new girlfriend – because this is the beginning of the very same relationship five years earlier.

In each scene, one partner usually is alone singing a soliloquy or inner monologue. In some cases, they are singing to their lover, but we do not see or hear the lover’s portion of the conversation. And in rare instances, the lover is visible and singing, but only as a creature of the other’s imagination. The only time the two are in the same scene and time period is when the time lines collide as they get married. And brilliantly, even then, the brief run up to the ceremony and the brief departure from the scene are happening into two different time periods.

It sounds confusing, granted, but once you understand the ground rules and work a little at it as an audience member, it underscores the fragile union of this supposedly indivisible couple.

Composer-lyricist-bookwriter Brown (Parade) does not break new ground in content, but his profound and insightful depiction is deeply moving.

Nowhere is this as pronounced than in the earnest heartfelt performances of Sara Grant as Cathy, the struggling actress frustrated as her career stalls, and Ben Sandomir as Jamie, the writer whose meteoric success strains their amity. Both have sweet, strong and expressive voices that enunciate every Brown syllable with clarity but also invest each with passion and meaning. These are singing actors or acting singers who can be animated with infectious glee or doubled over with heart-rending grief – without seeming to go over the top.

Because these characters are articulating thoughts to themselves, there is no censoring of emotion by self-consciousness or social convention; Grant and Sandomir lay their characters’ feelings out before us with a painful purity. At the same time, the actors and directors give us real, recognizable, warm human beings we root for.

Director Grant not only coaxes these performances out of her actors, but she has staged these musical monologues to keep them from feeling static. She also sometimes has an actor silently involved in some activity even when is not their scene, thereby underscoring the flowing counterpoint. When the characters are singing to those recollections of their lovers, they often sing directly to audience members in the tiny venue – a simply courageous bit of staging and performing.

Buelow flawlessly leads a combo including Lehnins Aragón on violin and Brad Miller on bass, all three who gently flow in and out of Brown’s gorgeous score that encompasses pop, jazz, classical, klezmer, Latin, rock and folk influences.

The one inherent crippling problem is that reverse-on-itself construction. Audience members unfamiliar with the show will think they are seeing some disconnected song cycle. It is absolutely essential that the stage manager in his curtain speech explain to people in the simplest language possible exactly how this works.

Another asset is its distinct sense as a musical about contemporary people, feelings and situations. The Last Five Years (made into a film last year with Anna Kendrick and Jeremy Jordan) is not some stuffy Eisenhower Era warhorse; it is the kind of show that, if you could get young people to risk 90 minutes of their lives, might turn them into musical theatergoers.

A nod is due the ubiquitous Sean McClelland for his simple but evocative scenic design – a scrapbook of memories including wood-framed photos of the couple during their relationship and dozens of knick-knacks exemplifying them such as a side-by-side menorah and Christmas tree.

Evening Star was created in 2013 by Grant as an offshoot of her Sol Children Theatre Company. This troupe is meant to “offer serious young adult actors, stage managers, and designers the opportunity to push the boundaries of their knowledge and talent in a safe and highly professional environment, and to allow them the opportunity to work with professionals in their chosen fields.”

It has always been ambitious in its early productions, taking on Shakespeare and The Addams Family with varied results. The coming season will undertake the scathing apocalyptic play Bug and David Mamet’s controversial take on sexual harassment, Oleanna.

Until this week, it would be fair to wonder if they were biting off more than they could masticate. But perhaps not anymore. It’s usually difficult to look back and identify the show or two when a nascent theater company “turned the corner,” say as Slow Burn Theatre Company did with next to normal. But it’s likely that if Evening Star continues to grow, this will be the show that will mark that event.