MSP’s Marjorie Prime: A Second Chance To Say What Was Left Unsaid To Your Parents 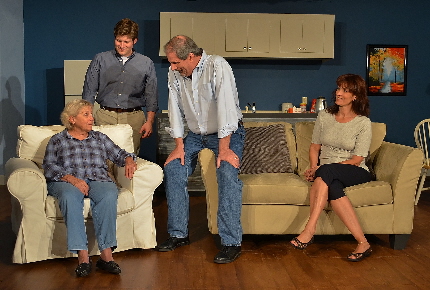 “Death ends a life, but not a relationship,” Robert Anderson wrote to begin and end his play, I Never Sang For My Father. Among a half-dozen interlocking themes, Jordan Harrison’s Marjorie Prime at Main Street Players posits 21st Century technology giving people a chance to say what was left unsaid, to finish unfinished business.

The insightful script for the Pulitzer finalist will resonate deafeningly with Baby Boomers caring for parents edging into senility or who have already lost their parents.

Main Street Players, a venerable community theatre in Miami Lakes, continues a promising maiden season as a professional company with a strong and affecting edition of this 2014 work that inexplicably has not been produced in South Florida before now and only once before in the entire state.

On paper, the premise simply sounds cute. Life-like robots with artificial intelligence can be purchased by ordinary families and trained over time by their owners to replicate the memories and behavior of a loved one who has died, providing as one character says “company.”

But as depicted in three-dimensions by this earnest and well-directed cast, Harrison shows how the opportunity lays bare a host of questions and issues. Among them what is the very nature of relationships, especially when they are built on memories that may or may not be accurate? Why sustain life as we pass middle age and as the quality of life begins to deteriorate? Can artificial intelligences “learn” emotions and thereby come close to being human? In the face of failing parents, how do we deal with our own mortality in the second half of our lives? Are relationships just shared experiences?

A plot summary needs to be sketchy because the narrative contains inventive twists that should not be spoiled.  We meet Marjorie (Carol Sussman), an 85-year-old whose mind has deteriorated. She cannot remember the most basic things, but once inside a memory, her recall is precise, detailed and crystalline.

In her living room, she is speaking to Walter (Chris D’Angelo) a handsome clean-cut impossibly genial young man. But something is a little off-kilter in the way she speaks to him – a slip of verb tense, an allusion to shared incidents that must have occurred before he was born.  Slowly, adroitly, Harrison makes us realize that this is an AI “Prime” built to look and sound like Marjorie’s husband when they were young.

Her daughter Tess (Fara Sax) and son-in-law Jon (Harry Marsh) arrive for their regular check in. Tess shows the wear and concern over caretaking and seeing her mother’s spiraling mental deterioration. (Jon asks, “How much does she have to forget before she’s not your mom?”) There is, as with most such relationships, a good deal of unspoken unsettled matters, but Marjorie’s condition make it unlikely that they can ever be resolved. Marjorie seems to like having Walter around, but Tess is uncomfortable with his existence. On the other hand, Jon is solicitous and comforting to both Marjorie and Tess.

The play shoots forward in time from scene to scene. It’s hopefully not giving anything crucial away (the title sort of does that already) that once Marjorie passes away, Tess and Jon buy a Marjorie Prime, which allows the relationship to continue. This isn’t meant to be coyly funny (although the play is leavened throughout with humor) nor overtly science fiction – it’s more like one of those Twilight Zone episodes in which human issues were explored by a quirky plot premise.

There are still twists ahead, but the perfectly acted and directed last scene raises other questions. Are memories what define human beings? If we revise the facts of our pasts in our retelling of them, are the resulting relationships true? Does that matter? (Think of the finale of the film The Man Who Shot Liberty Valance: “When the truth becomes legend, print the legend.”)

Harrison either did a great deal of research or has dealt with aging parents himself because his observations are painfully accurate.

This production is a classic example of what happens when an actor gets a good director and meaty skillfully-executed material. Sussman is a veteran local actress who, in the past few years, has appeared in several evenings of short plays that, to be honest, have not been especially impressive. But with Harrison’s script and Olivera’s direction, Sussman’s talent and skill finally gets the showcase she deserves. In the first scenes, she perfectly captures the flailing fear, confusion, vulnerability, resentment and other qualities that define a feisty independent woman whose body and minad are betraying her. But it’s acting; when she returns later as the title character, Sussman creates a Marjorie who is more alert, inquisitive, and palpably a lifeforce still being formed, reminiscent of a child.

Sax is just as credible as the deeply troubled daughter whose depression drives her deeper into unrelieved angst. Yet she creates two completely different affects later in the play. Marsh is serviceable as the loyal husband who tries to ease everyone’s problems as a compassionate listener. D’Angelo, who has worked frequently with community theaters, nails that slightly off-beat unflappable amiability and patience that signals subtly that he is not a human being.

Olivera has carefully calibrated the performances and the pacing so that this show flows smoothly all evening. The sole quibble is that scene changes in the silent darkness go on longer than an impatient audience might like; the forward drive of the play would benefit greatly from some atmospheric music piped in during those changes.

The production is not perfect; there is still a tiny vibe that says the company is still evolving towards its goals, but it’s inarguably on its way.

Most community theaters wisely do not attempt going professional, no matter how accomplished they become in attracting skilled artists. But adding Marjorie Prime to the earlier Real Women Have Curves demonstrates that Main Street Players is justified in taking the chance – and in audiences taking it with them.