Spoof Of ’30s Musicals, Dames At Sea, Lands At The Wick 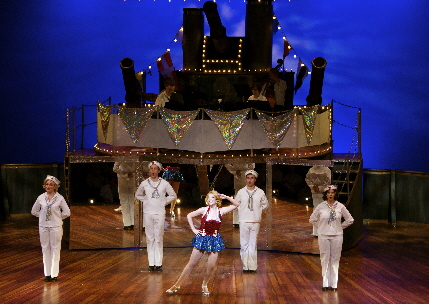 Lindsay Bethea as Ruby, the chorus girl turned Broadway star in one day, leads the cast in The Wick Theatre’s Dames At Sea

We were tough last week on the national tour of Anything Goes. If those folks want to know what we were hoping to see, they should take the day off and drop in on what The Wick Theatre is doing with Dames At Sea with a fifth of the resources.

Both musicals – and the On the 20th Century revival we just saw in New York — gently poke fun at the quaint conventions of 1930s stage musicals and movie musicals. The elbows in the ribs are a little sharper in Dames at Sea, but the theme remains of singing tap dancers throwing themselves into the ludicrous fantasies that allowed Depression Era audiences to forget their troubles, come on get happy.

But where Anything Goes was lackluster, this edition of Dames at Sea is a grin-inducing hoot in which the energetic cast’s ebullience is infectious. Seeing three such shows in ten days sort of wears you out for lampooning pastiche, but these performers under Michael Ursua’s staging, Caryl Fantel’s musical direction and Angela Morando-Taylor’s choreography carried along our weary spirits.

The whimsy with book and lyrics by George Haimsohn and Robin Miller and music by Jim Wise is a parody of those iconic fusty Busby Berkeley extravaganzas in which an understudy steps into a role on Broadway and becomes a star (also the plot of The Wick’s 42nd Street). This peppy dopey confection began off-off-Broadway in 1966 and then off-Broadway in 1968, both starring a soon-to-be-famous Bernadette Peters. Part of the humor in the cornball script and in Ursua’s staging stems from “recreating” these mega-musicals by imaginatively deploying six actors, a four-piece band and two sets.

Briefly, Ruby as in Ruby Keeler (Lindsey Bethea), a naif literally off the bus that morning from Centerville, Utah, lucks into a chorus line part in Dames At Sea, a musical slated to open that very evening, starring tempestuous diva Mona Kent (Laura Hodos). Ruby meets brassy gum-chewing chorine Joan (Alison McCartan), chaw-chomping director Hennessey (Gabriel Zenone) and instantly falls in love with Dick (Alex Jorth), a comely young sailor on leave who hails from, whoda thunk it, Centerville, Utah, and who plans to be a Broadway composer when he musters out. Joan is being romanced by an old flame Lucky (Blake Spellacy) who happens to be on the same battleship in the harbor as Dick, of course.

The only way you don’t predict every turn from there is when you can’t believe the creative team would dare take such silly turns, such as having the theater demolished around the cast and them transferring the show to the battleship’s deck. But no one in the cast is ever caught winking at the audience, undercutting their total investment is the silliness going on; there is no need since the entire show is one big joshing in the ribs.

Ursua has assembled and molded a strong cast, each with a clarion voice, a facility for machine-gun tap dancing and a clown’s temperament. Bethea gives Ruby a Georgia Engel baby doll voice and dewy eyes with ever-batting lashes. The fresh-faced Jorth ought to buy a condo because he has worked here so often (42nd Street, Annie, Oklahoma, The Full Monty, Fiddler on the Roof, etc.) If he does not set the place on fire, his amiable persona and undeniable terpsichorean abilities make him the kind of reliable singing dancing leading man that these kind of shows desperately need.

Zenone keeps happily surprising everyone with his range, from Sylvia St. Croix in Ruthless to the Bishop in Les Misérables to Charles Guiteau in Assassins. This show doesn’t challenge him quite as much, although we didn’t know he could tap dance, but his roles of a stage director and later a ship captain are faultless creations.

The discovery is McCartan even though she performed in 42nd Street and Steel Magnolias for the Wick. Her bold Joan, ostensibly in the second love interest slot, commands the stage every time she opens her mouth like an Ethel Merman belter.
She also show enviable tap skills in her dance off duet with the fine Spellacy.

And as always, any opportunity to watch Hodos perform is a pleasure. She fearlessly embraces Mona’s unbridled vanity and congenital need to steal the spotlight. In addition to her voice, she inhabits Mona’s pretentiousness as she employs French phrases that she consistently mispronounces.

The band this round is live with Caryl Fantel leading David Nagy, Rupert Ziawinski and Roy Fantel. Josieu Jean creates several wry projections including a black-and-white opening credits roll for the show as if it was a movie musical.

The whole thing joyously exploits every cliché imaginable resulting in an insubstantial confection of cotton candy – tasty while you’re watching but melts away into a memory.

Dames At Sea closes a highly successful second season at The Wick, which has built its annual subscribers from 235 to 2,600. After a few weeks of renovations and business changes, it will open its first summer season July 2 with the musical George M presented in a concert staging and in August, Peter Pan.