Thinking Cap Hosts Comic Daffiness In The Book Of Liz 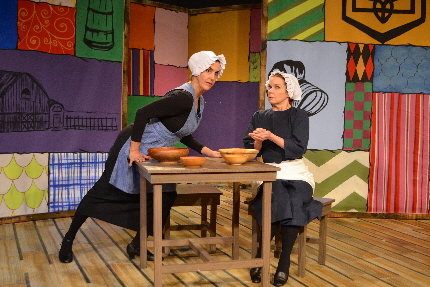 A naïve young woman from an isolated religious cult called the Squeamish (think Amish) finds herself in an oversized Mr. Peanut outfit on a highway giving the finger to honking motorists. Later, she discovers that her pronounced problem with congenital sweating may have a culinary upside.

Such daffy nonsense is indicative of the delightful silly satire in Thinking Cap Theatre’s latest foray into offbeat comedy, The Book of Liz, a spoofy hoot by Amy and David Sedaris.

While the prolonged script does persist well past what the premise will support, it also gives four gifted actors and director Mark Duncan the chance to flex their considerable chops as they inhabit as many as six oddball characters – a banquet of verbal and physical comedy.

Watch Christian Groom’s earnest facial reactions and diamond-honed timing with dialogue as her heroine Elizabeth navigates the world outside her parish. Or Matt Stabile as the staid paternalistic leader of the Squeamish then turn into the in-the-closet manager of a Pilgrim-themed family restaurant. Or Scott Douglas Wilson as a Squeamish member puffed up with self-importance, then become a happy-go-lucky Ukrainian immigrant with a cockney accent.

And any opportunity to watch Elena Maria Garcia peddle her matchless gifts as a physical comedienne is worth the price of any ticket as she morphs from a moralistic snoop to a recovering alcoholic waitress to a physician interested in off-beat cures.

The premise is that the bright but compliant Elizabeth Dunderstock has a knack for making oversized cheese balls (regular and smoky) exported to tourist traps and thereby financially keeping afloat the struggling Squeamish community of Clusterhaven somewhere around Minnesota.

But when the overblown Brother Brightbee (Wilson) arrives, the sect’s leader Reverend Tollhouse (Stabile) allows him to take over Liz’s cherished job. Feeling unappreciated, she runs away. Like a Candide in Wonderland, she meets an array of crazies in the outside world including the Ukrainians who give her shelter until she finds work at the Plymouth Crock restaurant chain staffed almost completely by recovering alcoholics. There is a shred of a message as Liz learns to stand up for herself and insist on the respect she has earned. While that’s not tacked on – it does run through the play – it’s still tertiary to the comedy.

When four actors inhabit multiple roles, the fourth wall is torn down as a production self-consciously celebrates the theatricality of it all. But when it’s done this well in the context of an out-and-out farce, you don’t mind naturalism being jettisoned to the winds.

The key to this working is director Duncan has found the right absurdist tone and then ensured the cast play every moment as if it’s deadly serious to them.

Much of the humor is happily sophomoric, punny, broad and often borderline blue, down to the Amish-themed parodies of rock and roll songs that entertain during scene changes, collated by Duncan and sound designer David Hart. The 2001 script is like a very extended edition of a first-rate Saturday Night Live skit. In other words, it has an ingenious concept, superbly executed, but lacking enough substance to sustain 1 hour and 40 minutes. A scene or two could have been cut or sweated down.

But Duncan is leading an inspired group of clowns. Groom creates a winsome woebegone naif exploring this brave new world that has such creatures in it. Groom’s Liz isn’t eager to please after a lifetime of being conditioned to be subservient, she’s just a genuinely giving person – which makes her vulnerable to the dismissive men in the community. Once a member of an improv troupe (and a schoolteacher), Groom has shown amazing range in the past year with her wrenching performance as the agonized teacher in New Theatre’s Gidion’s Knot and her Carbonell-nominated turn as eight women – most of them hookers who would scandalize Liz – in Island City Stage’s Have I Got A Girl For You.

Wilson, who was mesmerizing as the preacher in Thinking Cap’s Church, again immerses himself in three distinct personas. He is matched each step by Stabile with his three roles.

As always, Garcia’s endlessly inventive comedy is an added treat as her Silly Putty limbs and features add a half-dozen laughs to any moment when the spotlight is on her. A prime example is a scene when a blindfolded Sister Constance Butterworth taste tests Liza and Brightbee’s competing cheese balls: her expressions, paroxysms and moans probably add an extra couple of minutes to the show’s running time and we’ll bet Duncan had to rein her in, but from an audience standpoint, it’s a highlight of the evening.

The Sedaris or Sedarises or Sedari are brother-and-sister humorists who work together occasionally but are better known apart. Brother David is famed for his humorous essays in print and on radio, but in theater he may be best known as the playwright of the sardonic stage Christmas perennial, The Santaland Diaries. Sister Amy’s primary fame comes from her televised performances of delightfully off-beat characters such as Jerri Blank in Strangers With Candy.

Founded in 2010, Thinking Cap seems to be entering a new era, just as it occupies the new venue The Vanguard just south of downtown Fort Lauderdale. Both the troupe and the venue were founded by Nicole Stodard who has attracted a company of go-to players in sync with her vision of “experimental, provocative, and socially-conscious plays… that depict a range of identities more reflective of today’s society; to dismantling norms and stereotypes through non-reactionary, honest means; and to freshly presenting both well-known and rarely-staged classical plays.”

Those aren’t just facile phrases. Other than its recent triumph with the mainstream Always…Patsy Cline, most of its shows have had an adventurous, off-the-wall sensibility. Stodard gravitates to titles 98 percent of the South Florida audience have never heard of, let alone seen.

For instance, last summer it staged a fictional tent revival in The Vanguard’s parking lot in an effective play with music called Church. Stodard, a literature aficionado, adapted and directed a 300-year-old Restoration comedy by one of the first known female playwrights called The Rover, but seen through a punk sensibility. It’s most recent success was Vita & Virginia, a play composed of two famous writers reading letters they wrote to each other.

But even when it goes into even more avant-garde territory, Thinking Cap’s troupe understands the needed vibe and executes them with artistic discipline rather than unbridled anarchy. Not every piece has worked in the past, but The Book of Liz underscores that virtually anything this company does now is worth taking a chance on.

The Book of Liz runs through June 28 from Thinking Cap Theatre performing at The Vanguard Sanctuary for the Arts, 1501 S. Andrews Ave., Fort Lauderdale, on the west side of the street across from Broward Health Center. Performances 8 p.m. Thursday-Saturday, 5 p.m. Sunday. Runs about 1 hour 40 minutes with no intermission. Tickets $35. Visit  www.vanguardarts.org ,thinkingcaptheatre.com, or www.brownpapertickets.com/event/1475445 or by phone at (813) 220-1546.