Uneven But Unsettling “Bug:” This Is How The World Ends — With A Bang And A Whimper 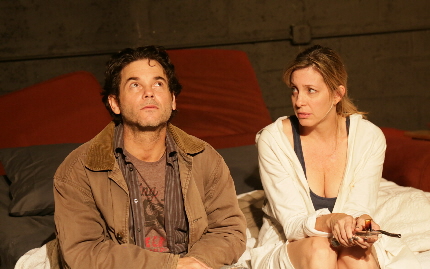 The edgy Infinite Abyss troupe recently has taken to producing evenings of Goth-ish haunted house-style immersive theater. But its co-production of Bug with Evening Star Productions presents psychological horrors far more unnerving than anything seen in a slasher movie – although there is gory viscera on display.

When a madman eviscerates a psychiatrist and drags several feet of bloody intestines to show his lover, you can guess that this isn’t a play akin to Evening Star’s recent romantic musical The Last Five Years or its mainstream tuner The Addams Family.

Tracy Letts’ early play about paranoia spiraling into madness is so challenging that it defeats many companies. It requires a precisely controlled degeneration as downtrodden souls turn into raving lunatics.

Evening Star/Infinite Abyss’s ambitious and earnest edition of this surreal odyssey under Rosalie Grant’s direction spends most of its first two-thirds almost somnolently phlegmatic to the point that some patrons might want to leave at intermission. But she finally ratchets up the energy as the sanity of its central lovers played by Todd Bruno and Erynn Dalton races headlong downhill toward fiery oblivion, taking the audience with it.

Evisceration aside, the most effective set piece occurs late in the play as Bruno successfully convinces the emotionally needy Dalton that his delusions are real about government conspiracies to infect human guinea pigs with the titular creatures. Once Dalton’s character buys in, she commits so completely to the insanity that she propels the conspiracy scenario into hyper-drive with apocalyptic results.

Playwright Tracy Letts, fresh off the weird crime tale Killer Joe and later to write the Pulitzer Prize-winning August: Osage County, penned this as a young man in 1996 for a London production and then rewrote it for productions in Washington, D.C., and his home base in Chicago in 2000-2001.

Bug is set in a seedy motel room in an unnamed city in Oklahoma where the washed-out sometime waitress Agnes White (Dalton) has been subsisting in a burned-out state since her violent ex-husband Jerry Goss (Dominick J. Daniel) was arrested for armed robbery two years ago. She and her best friend, the lesbian biker R.C. (Rachel Finley), are commiserating about R.C. trying to get her child custody restored while both women indulge non-stop in drinking, snorting and smoking substances that anesthetize them to the travails of the life in the American trailer trash analog to Gorky’s The Lower Depths.

R.C. has brought along a guy she has just met, Peter Evans (Bruno), a shut-down homeless nebbish with a lisp who is dressed in several layers of clothes too many. Something is obviously a tiny bit off about this jittery guy who winces at every noise from a battery alarm for a smoke detector to the air conditioner turning on. But Agnes, who is afraid of being alone at night, offers him a stretch of floor to sleep on overnight.

The stasis is upended with the sudden appearance of Jerry, unexpectedly released from prison, who breezes in as if no time has passed and absolutely expects submission from his ex-wife. When she resists the scuzzy Neanderthal, he resumes the physical abuse that leaves her nursing a bruised eye with a cold can of beer.

Once he exits, Peter and Agnes, recognizing mutually wounded souls, bond and make love. Peter moves in, and they begin to share their secrets, her more than him: She lost her six-year-old son at a grocery store a decade earlier. He begins slowly revealing that he is on the run from someone and that he is terrified of bugs that only he can see. Eventually, he is convinced that they are inside him.

While Agnes initially sees him as slightly bizarre, she is drawn into emerging details of his back story including institutionalization after service in the Gulf War. He begins to persuade her that his ever-more outrageous story is possibly, probably true. Agnes desperately needs even a smigden of human kindness and the seemingly gentle Peter is providing it. So she eventually buys heart and soul into his contention that government agents stalk him because they injected him with insects that double as computer transponders during a failed X-Files brand of experiment.

The escalating anxiety and the couple’s efforts to rid their bodies of the proliferating bugs will surge exponentially including lining the room with aluminum foil and some amateur dentistry.

While Peter is clearly insane, Letts’ injection of the too-smooth-talking psychiatrist (Jim Gibbons) makes the audience wonder for a fleeting moments whether there is some truth to Peter’s ravings. But equally possible is that the audience is seeing the world now through the couple’s deranged point of view.

By the end of the show, the audience will have been treated to violence, nudity, copious drug abuse and blood-spattered Grand Guignol gore. Leave the kids at home and bring some Calamine lotion.

It’s never quite clear what Letts’ point is, but he seems to imply that human beings are spiritually and psychologically poisoned by the increasing dominance of technology, chemicals and other hallmarks of the modern age. But his key takeaway is that paranoia is as infectious as any laboratory-bred bacillus. About the only thing Peter doesn’t suggest is that Obama is about to have federal troops invade Texas. While sometimes the suspicions border on the risible, the local audience finds itself unconsciously scratching at invisible itches.

To make the play have an arc, the descent has to be carefully calibrated, so Grant has kept the actors reined in and tamped down to begin with. But the protagonists are so beaten down for so long that they don’t capture our interest and most scenes slowly slog through a morass of molasses. It also doesn’t help that most actors mumble and swallow their words sometimes while rain outside pelts the theater’s roof and the air conditioner growls. Daniel especially was downright inaudible at times.

That said, the aforementioned scenes as Peter seduces Agnes into his madness are surprisingly terrifying as Grant, Dalton and Bruno make the conversion unsettlingly credible, quite an accomplishment.

The budget for the show is scant, which is good because the set is a threadbare fleabag hotel which you easily believe could be infested with the critters without any help from the government.

Evening Star, which normally produces up in Boca Raton, has joined with Infinite Abyss to mount the show in Infinite Abyss’ new home in Wilton Manors just south of Five Points (Evening Star’s regular venue is occupied right now with its sister company, Sol Children Theatre’s preparations for Thumbelina). Island City Stage is planning to move to the space this fall. Dalton is producing director of Infinite Abyss.

Warning: While there is a good deal of parking on the street and behind the building for other businesses in the neighborhood, much of it also has 24-hour tow notices. Make sure you know that where you are parking is legit.

Side note: GableStage produced Bug in 2004, the first of many times that Todd Alan Durkin worked in that venue and one of the first local appearances of Kathryn Johnston, later to be an assistant professor at Florida Atlantic University.