When The Applause Fades: Dramaworks Gives Teachout Premiere of Billy And Me 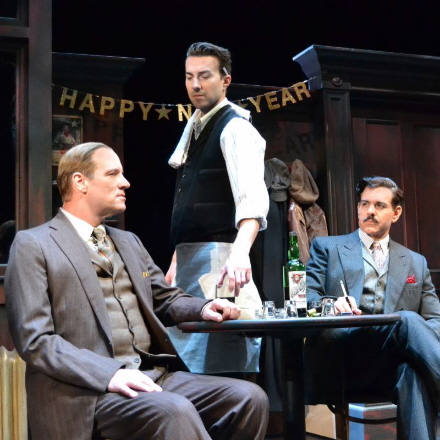 Tom Wahl, Cliff Burgess and Nicholas Richberg in a fraught moment in the world premiere of Terry Teachout’s Billy and Me at Palm Beach Dramaworks / Photos by Samantha Mighdoll

Veteran professional magicians will tell you that there really are only about seven basic magic tricks. Everything else is imagination, technique, skill and showmanship.

So it is with Palm Beach Dramaworks’ production of the world premiere of Billy and Me, a fictionalization of the real life relationship between playwrights Tennessee Williams and William Inge.

The underlying themes are familiar: What constitutes success, the price of artistic integrity, the source of artistic compulsion, accepting who you are, guilt in the wake of family dysfunction, professional and artistic jealously, concerns about leaving a lasting legacy, dealing with commercial and popular disinterest after undisputed accomplishments.

The magical triumph here, and it is a triumph, is the imagination, technique, skill and showmanship of playwright Terry Teachout, director and co-creator William Hayes and bravura performances from Nicholas Richberg as Williams and Tom Wahl as Inge.

This quartet and a superb creative team thrust you deep inside people for whom these questions aren’t academic dorm-room discussions but the fabric of their lives.

It is no overheated melodramatic depiction of “tortured artistic souls” because Billy and Me clothes the clichés in flesh, blood and passion. A few moments arise when their allocution of woes seem to beat the equine a little too much and too long for the audience, but these protagonists are justified in their verbal writhing.

The play, as Tom says in The Glass Menagerie, is memory. A 71-year-old burned out Williams is discovered on a disused stage, flooded and haunted by hallucinatory sights and sounds. This may even be purgatory where he labors to sort his life. Seeing a real audience before him, the congenital storyteller begins his tale in New Year’s Eve 1944 as Menagerie is struggling in a pre-Broadway tryout in Chicago. Williams’ first play has been a flop and at 33, this last chance is dependent on an alcoholic star.

He has invited Inge, a quiet repressed theater critic from St. Louis who interviewed him previously, to meet in a seedy tavern (which turns out to be a gay bar) after a performance. Inge is enamored of the play he has just seen – to the point that he frequently quotes lines already burned into his consciousness.  Traded stories reveal they are more similar than their exteriors would suggest: Both men are gay alcoholics with serious mother problems plus a truckload of private guilt.

Indeed, the colorful outsized Williams encourages Inge to acknowledge who he is and to live his life fully.Williams advises, “You’ve been dragging a lot of loneliness around behind you, my friend.” Inge realizes from the play he has seen and his interaction with Williams that he must pursue his innate desire to write.

The two bond as they did in real life, although this stage Williams’ recollection that they had been lovers was never documented in real life – as the stage Williams wryly admits to the audience; this is his version of their story.

Fast forward to 1959. Inge has had a string of popular and critical successes: Come Back, Little Sheba; Picnic; Bus Stop, and Dark at the Top of the Stairs. Williams has had his bold-face successes such as Streetcar and Cat, but as Inge’s star has risen, Williams has had an inverse series of flops such as Camino Real. As he tells us, “Billy boy was the toast of the town. He couldn’t do anything wrong—I couldn’t do anything right.”

The premise of the second act is sheer invention: No one knows where Inge was on the night of his first but emotionally crushing flop, A Loss of Roses. But Teachout suggests the drunken Williams and the transitorily sober Inge met at Inge’s stylish apartment for a stormy post mortem of recriminations and the airing of a dozen issues plaguing both men.

A central facet examines creative people continue pursuing their art irrespective of success or failure, with both men questioning the popular definitions of both terms.

To conflate speeches from the script, Williams says, “We’ll keep writing whether they like it or not. Whether anybody likes it or not. Even if neither one of us writes another hit for the rest of our lives.” Inge replies, with more prescience than he knows, “We probably won’t.” To which ‘Williams answers, “So be it.”

Later, when Inge bemoans a lack of happiness, William says, “You don’t do this to be happy! You might make other people happy, if you’re lucky…. This play flops, write another. Next one flops, write a movie. Movie flops, write a novel. You’re a writer like you’re a queer—it’s in your blood. It’s who you are.”

In 2017, Williams remains an acknowledged master of American art while Inge’s is revered among theater lovers, but not well-known outside that circle. As Teachout’s Williams says in a moment of jealousy-motivated anger, “You haven’t written one line in your whole goddamn life anybody’s going to remember ten years from now. Five years from now. You’d have killed your mother to write “Blow out your candles, Laura.”

The production’s virtues are many. First is the script written by Teachout and conceived/molded by Hayes. The basic premise is intriguing, the characters fascinating and Teachout’s imaginative guess on the details of their relationship is absorbing.

The play’s satisfying grace notes start with its structure. The two major scenes are bookended by the aging decrepit Williams musing on the dormant stage. Stagehands help him change his clothes and arrange set pieces to create the bar in an appropriately theatrical meta experience. Williams, the creator of gloriously theatrical constructs, is up front about being an unreliable narrator and that what you will see is may not be precisely accurate.

He says, “A snowy night. Or so my own notoriously imperfect memory assures me. Perhaps it wasn’t. It might have been raining. Or unseasonably warm. You know what they say: we drink to forget! But it should have been snowing, and so….it was. A blizzard, in fact. In memory, everything is true.”

This leads early on to a stunning theatrical moment when Williams with his back turned to the audience sheds his age along with his tatty clothes, his curved spine straightens and he turns to face the audience as the 33-year-old flamboyant artist posing with a bright smile and a long cigarette holder dangling from an outstretched arm. Yes, it echoes Peter Hall’s Amadeus, but it is perfectly written, acted, directed and lit.

Teachout, who has written opera librettos and biographies, demonstrates volumes’ worth of dramaturgy and crafting dialogue gleaned from his day job as theater critic for The Wall Street Journal.

Perhaps its greatest virtue is Teachout’s creation of his stage Williams’ voice. His Williams pointedly indulges his brilliance for poetic prose seamlessly mixing references to classic and pop culture with lines from his own work – the latter not so much verbal preening as reflecting his obsession with the autobiographical elements of his plays.

This critic has long been critical of most biographical plays, especially two-handers, which clumsily dump exposition and the inevitable “Yes, as you know, and then I wrote.…” Teachout, whose only other play was the Louis Armstrong solo show Satchmo at the Waldorf, deftly dodges those pitfalls for the most part by characters citing the past as examples in their present argument.

Playing into the meta-aspect, it’s delightfully ironic that Teachout regularly has both men rage and revile against the life-changing power of critics over the survival of Art. Not remember

This play has been in gestation about a year and a half with the integral involvement of Hayes. He has helped shaped not only the script but has dexterously staged this dialogue-heavy play so that these characters are often in motion.

A former actor himself, Hayes brings out the very best in these top-of-their game thespians and molds them into a whole. Further credit is due to Hayes and the actors for a couple of notable facets.

First is the physicality. In the first act, Williams’ body language is flamboyant, yet not effeminate. But this man, still inventing the person he wants to be, is forever posing, forever waving arms for visitors. Yet in the second act, time’s eroding vagaries have reduced his kinetic vibe, and in part because he is simply hanging out with a friend he no longer needs to impress. Inge, as well, starts out physically as someone tentatively seeking his bearings on foreign ground. In the second act, though, he reflects the fragile assurance of an accomplished success, yet more worn down with his enthusiasm shattered by recent failure.

Indeed, at a crucial moment in the second act, Wahl alone on stage once again creates a shattering moment with a wordless breakdown, much as he did in 2016’s After.

As alluded to, both these actors – among the best this region has – are phenomenal inhabiting these characters and subtly differentiating their evolution over time,

Richberg, who has played Stache in Peter and the Starcatcher and the brother in The Caretaker, adds another calibrated performance by making Williams someone intentionally operatic yet completely real. He is by turns – and sometimes simultaneously – a preening poseur and someone anguished by guilt. He also has has nailed Williams’ syrupy accent that one suspects Williams manufactured – a mélange of Midwestern twang and Southern drawl.

Wahl, who played the title character in An Act of God, has the less showy role which makes his work even more worthy of acclaim. He is especially effective portraying the very different stages of Inge as the idealistic young writer-to-be and the latter day battered suicidal success. He is capable of almost dewy-eyed adoration and impassioned fury.

Cliff Burgess plays a barkeep who is even more obvious in his sexual interest in Inge than the none-too-subtle Williams.

The production values, as always at Dramaworks, are outstanding. They include Brian O’Keefe’s character-revealing costumes that change with the period down to Williams’ black cowboy boots with a three-piece suit and bowtie; David Thomas’ soundscape encompasses the far off singing of drunks in the next room, the memory of rapturous applause and the strange zipping sound when Williams snaps in and out of his present day reveries in mid-scene. Victor Becker’s evocative swiveling scenery includes Inge’s sophisticated Sutton Place apartment and a wood-paneled dive that looks like Harry Hope’s dusty bar. Paul Black’s chiaroscuro lighting is complex and detailed down to the slow fade of the ghost light on stage.

The end result is a merciless examination of the intersection of fame, talent and the inescapable need to create.

Billy and Me runs Dec. 8-31 at Palm Beach Dramaworks, 201 Clematis St., West Palm Beach. Performances are 7:30 Wednesday-Thursday, 8 p.m. Friday-Saturday, 2 p.m. Wednesday, Saturday and Sunday; 7 p.m. some Sundays. Regular individual tickets $75, student tickets $15, and Pay Your Age tickets are available for those 18-40. Tickets for educators are half price with proper ID. Running time is two hours including an intermission. Call 561-514-4042 or visit palmbeachdramaworks.org.

To read a feature on the creation of the play, click here.