GableStage’s A Steady Rain is a Deluge of Great Acting 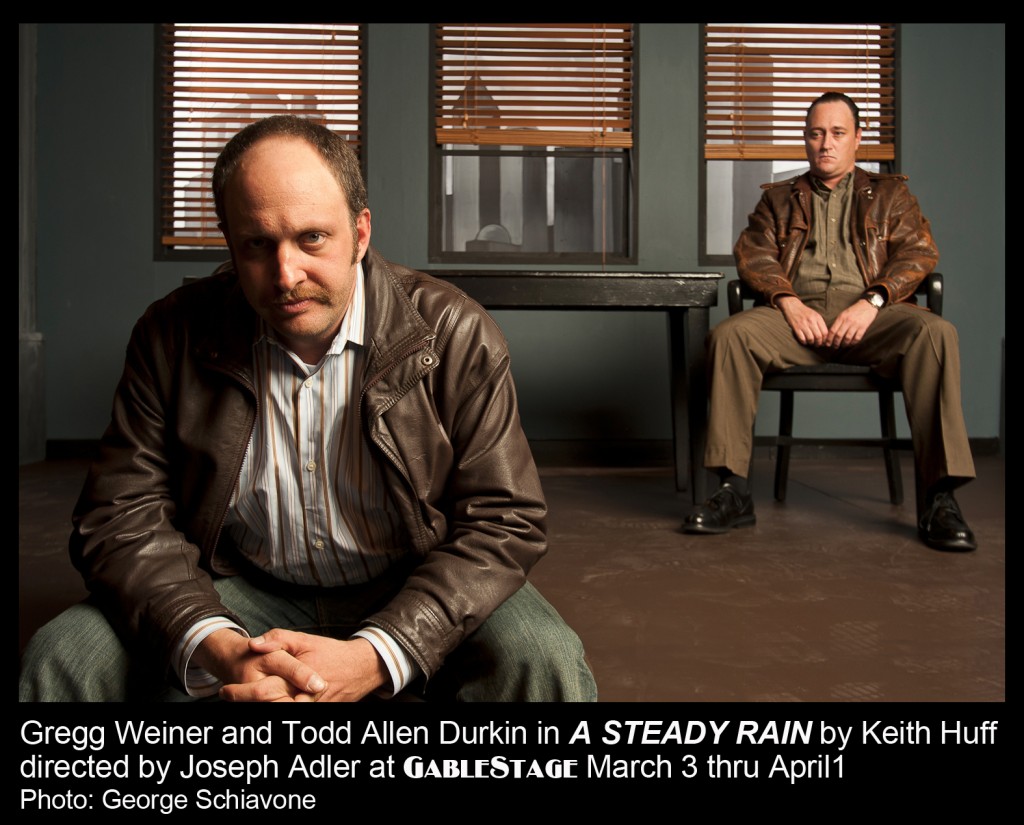 The bond between two friends is tested by their own morality and betrayal in A Steady Rain by Keith Huff, now making in southeastern premiere at GableStage in Coral Gables.

Set on the mean streets of Chicago in what the program describes as the not too distant past, Denny (Gregg Weiner) and Joey (Todd Allen Durkin) navigate the complicated relationship they’ve had since childhood.  Now partners on the Chicago police force, they always have each other’s back, even when faced with the Shakespearean circumstances that have invaded their everyday lives.

Moral ambiguity rules Denny’s life. Although he is a family man devoted to his wife and two sons, he has a mistress who is also a hooker.  And while Denny sees himself as a hero fighting to make his city safe from the bad guys, he’s not above shaking down and beating up pimps, making money on the side from confiscated drugs, or planting a gun on an unarmed victim to rationalize shooting him.

Joey faces his own skewed morality. He battles the bottle, mainly because of his guilt over being in love with Denny’s wife. And he aids Denny in his wrongdoings, by either looking the other way or actively assisting.

A Steady Rain is a character study of these two men and their relationship. This is the kind of play director Joe Adler loves, one that will drag its audience through the muck and leave them breathless on the other side.  The plot, which includes a real-life incident involving cannibalistic serial killer Jeffrey Dahmer, is conveyed through monologues, with an occasional flashback of conversation between them.  The structure is monotonous at times —  after all, the first rule of writing is show, don’t tell — and nearly an hour into this 90 minute play one might wonder what it’s about or where it’s going.  But here, to disagree with Shakespeare, the play is not the thing. The acting is.

Weiner and Durkin are brilliant actors — South Florida is lucky to have them — and here in Huff’s two-hander, their brilliance is laid bare for the audience to see. Because while the plot in A Steady Rain is told, the emotional core of the story is shown, etched into Weiner’s and Durkin’s face.  A Steady Rain offers these two actors meaty roles in which every feeling — betrayal, pain, love, longing, guilt, anger– waltzes across their faces. The pain in Durkin’s eyes and the ache in his voice is palpable as he recounts his illicit love and stolen moments with his best friend’s wife.  Weiner is at his anti-hero best as he recalls his bad behavior in a classic the-end-justifies-the-means rationalization. Together, Weiner and Durkin create a riveting pas de deux that is not to be missed.

The design elements in the GableStage production complement the performances without overshadowing them.  Matt Corey’s sound sets the mood and punctuates the drama. Jeff Quinn’s often stark lighting plays into the characters’ moral ambiguity. Lyle Baskin’s set design of the Chicago skyline and the steel structures suggesting the city’s elevated trains also complement the characters’ downfall.

Huff’s structure of A Steady Rain can make it hard to get through, but Weiner and Durkin turn a difficult play into a master class in acting that will make you savor every moment.

A Steady Rain runs through April 1 at GableStage, 1200 Anastasia Ave., Coral Gables, inside the Biltmore Hotel.  For tickets and more information, call 305-445-1119 or visit GableStage.org.