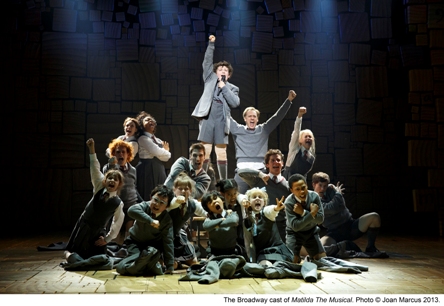 Two-time Tony winner Finneran and New World School of the Arts grad has been a linchpin with her portrayal of Miss Hannigan in the new production of Annie, which scored several nods including best musical revival.

Winners of the American Theater Wing’s 67th awards will be announced during the annual ceremony, broadcast live television on June 9 at 8 p.m. on CBS. It will be held at the cavernous Radio City Music Hall after a two-year exile at the tinier Beacon Theatre. As in past years, Maltz Jupiter Theatre’s Producing Artistic Director Andrew Kato will be working behind the scenes as creative consultant/coordinating producer.

The complete list of nominees can be viewed by clicking here.

As expected, the British-born musical Matilda the Musical reaped 12 nominations, ranging from its book by Dennis Kelly to its music and lyrics by Tim Minchin, plus recognition for its director Matthew Warchus, choreographer Peter Darling and British actor Bertie Carvel who transferred with the original production to portray the heroine’s nemesis, a monstrous female teacher named Miss Trunchbull.

The dark musical based on a children’s book by Roald Dahl, a master writer of macabre short stories for adults but best known as the creator of Charlie and the Chocolate Factory. The plot is described by Playbill as: “the story of an extraordinary 5-year-old girl who loves to read and dreams of a better life. Armed with a vivid imagination and a sharp mind, Matilda dares to take a stand and change her destiny… Matilda is a little girl with astonishing wit, intelligence and psychokinetic powers. She’s unloved by her parents but impresses her schoolteacher and, over the course of her first term at school, teacher and pupil have a profound effect on each other’s lives.”

The show won raves from the normally reserved New York critics, but South Floridians and others who have seen it are so radically divided that you’d think they had seen different productions. Some are enchanted; some say it’s a kiddie musical at best.

About the only category it didn’t dominate was best actress and that’s only because the Tony administrative committee ruled that the four girls alternating in the title role could not compete en masse as was the case with the three boys playing Billy Elliot in 2009. Instead, the young ladies will get a special “Tony Honors for Excellence in the Theatre.” To see a promotional trailer, click here.

The bookies in Vegas are already giving the inside track to Matilda, but the musical that took the most nominations was Kinky Boots, with 13 nominations. The flamboyant stage version of the 2005 movie was musicalized by pop star Cyndi Lauper and multiple Tony-winner Harvey Fierstein. The plot tells of a young man trying to save his family’s collapsing shoe factory. When a drag queen arrives in need of sturdy stilettos, the two work to turn around the company’s fortunes by investing in a radical new direction. To see a promotional clips from the show, click here.

The other musical seen as having an inside track, this time in the revival category, is the Pippin re-imagined by Diane Paulus who did similar honors for Hair several seasons back. If Matilda has divided audiences, Pippin’s circus-infused vibe has been universally beloved.

Another obvious trend reflected the inescapable trend of star-casting – trying to insure a show’s financial success by hiring a name from film and television, some of whom haven’t been on the New York stage in decades or ever. In this case, noms went to Broadway newbie Tom Hanks, starring in the late Nora Ephron’s biography of hard-driving New York newsman Mike McAlary in Lucky Guy, and Cicely Tyson – absent from the Main Stem for 30 years — as the 88-year-old traveler in the revival of The Trip To Bountiful. Snubbed was Better Midler who won acclaim for her one-woman show about super-agent Sue Mengers, I’ll Eat You Last.

In the play category, the now-closed Who’s Afraid of Virginia Woolf? revived by the Steppenwolf Theatre did well with a best play nomination as well as nods for its director Pam McKinnon, and lead actors Tracy Letts and Amy Morton.

Among the non-competitive awards, Larry Kramer, the fiery AIDS activist and playwright of the wrenching The Normal Heart, will receive the Isabelle Stevenson Award named for the American Theater Wing’s late president. The award recognizes an individual from the theater community who has made a substantial contribution of volunteered time and effort on behalf of one or more humanitarian, social service or charitable organizations, regardless of whether such organizations relate to the theater. Past recipients of the Isabelle Stevenson Award include Phyllis Newman, David Hyde Pierce, Eve Ensler and Bernadette Peters.

The Regional Theatre Award will be given to the Huntington Theatre Company, one of Boston’s leading companies. The award is presented by the Tony administrators based on the recommendation of the American Theatre Critics Association.

Note: We’re in New York this week, sending back reviews and reports every other day. We have already reviewed The Madrid and The Trip To Bountiful. Upcoming reviews include a stunning new version of Strindberg’s The Dance of Death; Ann, with Holland Taylor’s Tony-nominated turn as Texas governor Ann Richards;  The Big Knife, with Richard Kind’s nominated role, Christopher Durang’s Vanya and Sonia and Masha and Spike nominated for six awards.