Winners Of 17th Cappies Honoring Students In The Theater And Criticism 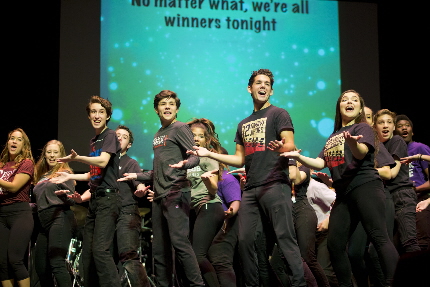 Students performing the opening number “Another Op’ning Another Show” for the 17th annual Cappies Awards gala.

The crush of more than a thousand cheering students, their parents and friends overflowed the orchestra seating and the boxes of the Broward Center’s cavernous Au-Rene Theater at the Broward Center May 14  as the 17th annual Cappies Awards recognized excellence in high school theater and theatrical criticism.

The Critics’ Awards Program, or Cappies for short, is comprised of 23 public and private schools throughout Broward and Palm Beach counties in a gala program of performances and  award presentations to student performers, designers, technicians and critics.

With nine, Marjory Stoneman Douglas High School took home the most Cappies Awards including Best Play award for its production Curious Incident of the Dog in the Night-Time.  Best Musical went to South Plantation High School’s production of Once On This Island.

The gala began with an energetic opening number which parodied “Another Op’nin, Another Show” from Kiss Me Kate, performed by students from each of the nominated shows. Additional musical performances in this year’s gala included numbers from the six productions nominated for Best Musical and/or Best Song. Audiences also enjoyed scenes from the five Best Play nominees.

Among the notable winners:

—-Emiliana Quiceno, who played the 11th Juror in Archbishop McCarthy High School’s production of 12 Angry Jurors, won Best Comic Actress in a Play as the only nominee in her category.

—-Eva Daskos is a double winner, earning Best Costumes and Best Actress in a Play for role as Puck in the Sagemont School’s production of A Midsummer Night’s Dream.

This entry was posted in News and tagged Cappies. Bookmark the permalink.