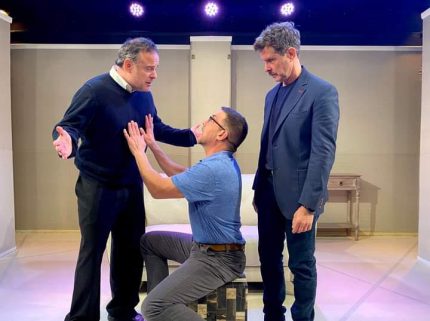 There is an art to getting along with people – and it is not on display in French playwright Yasmina Reza’s darkly comic piece, Art.

In fact, an apt subtitle might be, “How to Lose Friends and Alienate People.”

A respectable production of an English language translation of the multi award-winning play is on stage through May 15 in Empire Stage’s extremely intimate playing space in Ft. Lauderdale. The professional company is an artist-driven collective that produces new and existing works for the city’s diverse audiences.

Reza’s piece, which runs a little more than an hour with no intermission, never feels like an art appreciation or art history course. The best plays about art are not that limited in scope. Rather, Reza uses visual art as a springboard to explore, for example, the intricacies of human relationships. Ultimately, Art is about how perception can impact relationships, how sometimes even the simplest acts can result in life-changing consequences, and the complexities of relationships and language. Indeed, friendships are not “monochromatic,” or as simple as the color white might suggest. Instead, there are subtleties and nuances when it comes to human interaction and language.

Art, which features short, pithy scenes and snappy dialogue, won the Theatrical Triple Crown: The French Moliere Award for Best Production, the British Olivier Award for Best New Comedy, as well as the American Tony for Best Play. Overall, the play is funny, stimulating, stylish and moving. However, it would have been nice to learn more about the characters.

In this production, it is not clear where the play takes place. Perhaps, director Amir Darvish made a conscious choice not to answer that question, in order to reinforce Art’s universality. What we do know is that the year is 1996, although it is not clear why the play is set during that year. Also, at least in the beginning, we are in a simple, yet elegant apartment (which set designer Ardean Landhuis spaciously and tastefully designed, and which lighting designer Preston Bircher lights realistically).

The apartment belongs to Serge. He is a successful dermatologist who recently bought a four-foot by five-foot pure white painting. In fact, Serge had been lusting after the painting for months. When the play begins, Serge’s friend, Marc, is visiting the former’s apartment to look at the artwork. Before long, Marc refers to the painting as a “piece of sh—t.” And, before you know it, Marc and Serge are attacking each other, emotionally and physically. Meanwhile, another friend, Yvan, despite his own problems, allows himself to be drawn into the middle of Marc and Serge’s differences.

Art is not a play with a traditional plot and structure. Rather, it is a series of dialogues and monologues during which the characters talk about each other.
The artwork at the center of this play may feature a color that we often associate with purity. However, there is little that is pure about the behavior that the threesome exhibit throughout this combustible comedy. Indeed, the piece features sarcasm, insinuations, verbal attacks, and even a physical fight occurs– all as a result of the white square. Or is that the case? Perhaps the white painting merely serves as a launching pad for long-buried ill feelings to spill from the characters’ mouths.

Without question, Marc is the play’s hardest character to like. In fact, his arrogance could cause you to gasp. However, the playwright does not assign blame solely to Marc, nor does she treat the other two characters as saints.

Yvan is buckling from the weight of his own issues. For instance, he is about to get married, and he is having to deal with members of the wedding party. They are bickering like the men on stage. Yvan must not only deal with the wedding party (offstage), but he tries to keep the peace between Marc and Serge. They fight for his allegiance and, at times, practically dehumanize him.

As Yvan, Dean Nigro looks and sounds every bit as overwhelmed, panicky, and pathetically submissive on the stage as Reza portrays the character on the page. And you have to marvel at how seemingly effortlessly Nigro delivers one long monologue while making it sound as though he is saying each word for the first time. Certainly, it may rivet you to the stage. Nigro’s Yvan looks particularly pitiful when he is crawling on all fours, looking for the top to his pen. Frankly, he resembles a desperate, nervous dog.

Meanwhile, as Marc, David R. Gordon believably captures his character’s arrogance, while sometimes pointing his finger to punctuate remarks. Also, Gordon leans into the characters to whom he is speaking, reinforcing Marc’s aggressive personality.

And Ben Prayz convincingly imparts impatience and defensiveness as Serge.

Contrast exists between the white painting and Empire Stage’s black box-style theater. However, the nature of relationships, language, and art are not black and white. Rather, there are shadings, as Reza’s layered play reminds us.