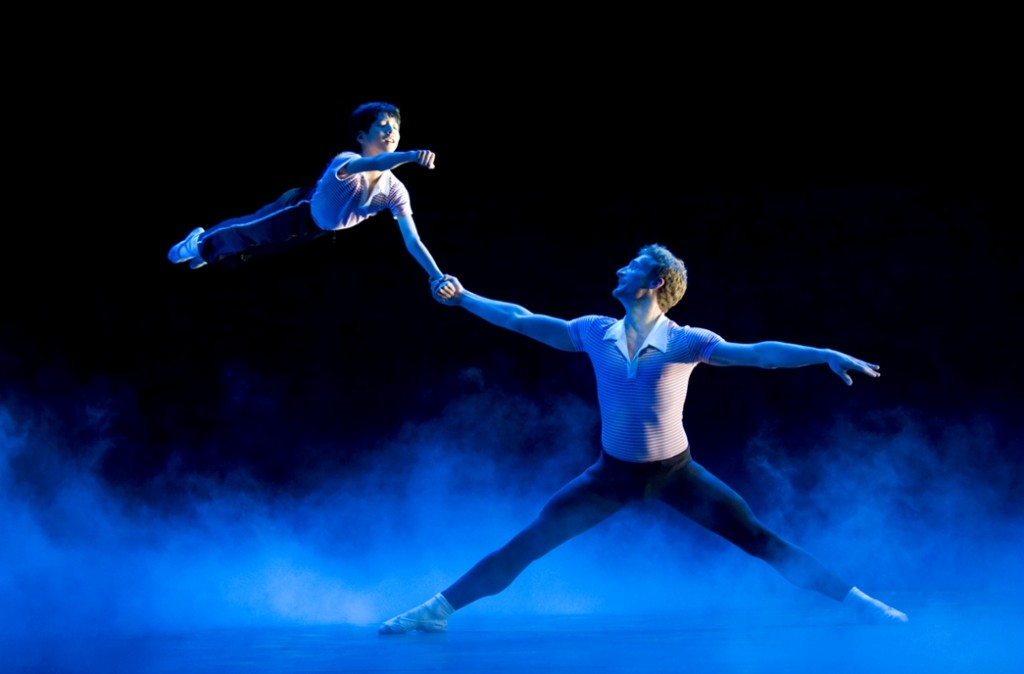 With its flights of imagination – literally, since the hero imagines himself soaring  — Billy Elliot, The Musical is a triumph of theatrical staging. If this road tour at the Broward Center for the Performing Arts is not overwhelmingly moving, it remains one of the most thoroughly entertaining musicals to pass through here in some time.

Indeed, imagination is the keystone of both Lee Hall’s script and director Stephen Daldry’s creative team. Over and over, the audience is treated, a good choice of word, to what the world looks like from the inside of young boy’s head.

A clash of striking miners and riot police is reinterpreted in Billy’s mind as a nightmarish dance worthy of Edvard Munch. When Billy and a friend dress up in girls’ clothes, they celebrate the freedom from societal constraints with a Technicolor tap dance surrounded by life-size dancing women’s outfits. And there is that glorious cloud-misted pas de deux to Swan Lake performed by Billy and his older self that physicalizes Billy’s soaring soul.

This is not some adult’s view of childhood, like J.M. Barrie’s Peter Pan, but that melding of clear-eyed realism and fantastical musings of a young mind unfettered by convention.

Hall’s book and lyrics are muscular, gritty and profane, yet the entire evening is infused with a sense of humanity’s innate yearning for something finer and more enduring despite the requisite preoccupation with surviving a hardscrabble existence.

The winner of a slew of well-deserved Tony Awards in 2009, Billy Elliot is blessed with a long list of virtues including Elton John’s music (so superior to Aida that it seems to have been written by someone else), Daldry’s talent for visual imagery abetted by lighting designer Rick Fisher, and above all, the breathtakingly inventive choreography of Peter Darling who designed completely credible dances for miners, police officers, parents and children as seen through the prism of Billy’s imagination.

The story mirrors Hall’s 2000 movie screenplay and echoes several British using-art-to-escape-poverty tales such as Emlyn Williams’ The Corn Is Green. Eleven-year-old Billy is the youngest son of a widowed miner in a northern English village in 1984. When Prime Minister Margaret Thatcher tries to close the pits to bust the miners’ union, the villagers go out on a grueling year-long strike marked by privation and growing violence.

Billy, a dreamy lad, finds himself skipping the boxing training his dad is paying for and slipping into the all-girls ballet class taught by the acerbic Mrs. Williamson. The third-rate teacher nurtures a nascent talent in the boy while Billy finds dance express his loneliness and pre-adolescent angst.

But his family, already beleaguered with escalating tensions of the strike, is opposed to the teacher’s efforts to help Billy leave the doomed region via the ticket of his talent.

Some observers have fretted that American audiences won’t plug into the historical and cultural context, the same worry when the British import Jerusalem played Broadway last season.  This is the same world set a few decades later that Hall explored in The Pitmen Painters, now at Palm Beach Dramaworks. While no one ever went broke underestimating the perceptiveness or world view of the American public, the worriers shortchange Hall’s skill at creating universal touchstones within an alien situation.

The sole quibble is that while Billy Elliot has some moving moments, notably the father’s sacrifice of his principles for the love of his son, you’d expect the entire evening to be a far more emotional experience. All the elements are here and doubtless some audience members will be affected. But that transporting magic that obliterates the fourth wall seems to be missing.

You can’t really blame the cast who were dead perfect. The Billy we saw (one of four) was Ty Forhan, who has a sort of a frail Macauley Culkin/Anne Heche look to him. His dancing, it goes without saying, is unassailably fine, although not as crisp as you might expect in the frenzied explosion of a solo that closes the first act when Billy’s dream is squashed by his family.

Where Forhan really shines is as an actor. You can feel how his mother’s premature death has blunted his spirit. As Billy is drawn deeper into dancing, Forhan’s face exudes a dogged determination while exposing his puzzlement at the emergence of this particular outlet and skepticism that he can achieve his goal.

Understudy Sasha Ely-Judkins, who stepped in as the teacher, was a standout armed with a brassy trumpet of a singing voice and her character’s brusqueness created to cope with a life that has not gone as she dreamed when she was Billy’s age.

But there was not a weak link in the group; no one is coasting. Rich Hebert is the salt of the earth father struggling with the loss of his wife and the slow destruction of his way of life. Cullen R. Titmas is the fiery older son favoring violence to win the strike. Cynthia Darlow has a wry turn as a doddering grandmother remembering how dancing helped her cope with an abusive husband. Jacob Zelonky stopped the show as Billy’s best friend already exploring his sexuality. His joyous tap dancing duet with Billy is a highlight of the evening.

While everyone proves in the finale that they can dance up to a point, several members of the ensemble are middle-aged and thick around the middle, making for convincing blue collar workers and their families.

No question that some people will complain about the comprehensibility of some actors, all of whom deliver a credible northern British  accent. Your ear will adjust if you invest a little effort in paying attention, rather than passively require the words come to you. But admittedly, many lyrics were lost in gibberish and it wasn’t the sound system’s fault.