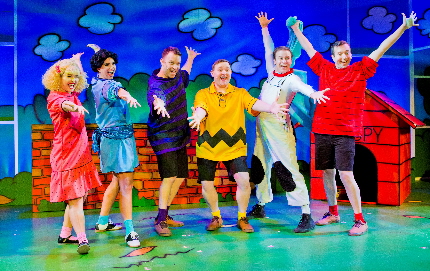 This edition glows during the musical numbers thanks to a solid corps of performers whose energy, chemistry and strong lung power deliver every song with unrestrained joy whether it be about a security blanket or a book report.

The script scenes – mostly short vignettes that echo Schulz’s wry four-panel cartoons – are quite funny sometimes, poignant other times but unfortunately often simply don’t land. Having seen this before, a good guess is that Schulz’s quiet observations that seem cute on newsprint don’t translate well into three dimensions on stage. The only thing that saves it here is this indefatigable cast pitching each skit with complete commitment.

Still, the juxtaposition of children expressing what we’d think are adult sentiments is still drolly entertaining such as Sally saying “I was jumping rope and suddenly it all seemed to be so futile.” Any adult of any age can plug into Charlie Brown’s sense of loneliness and worthlessness when he doesn’t get a single Valentine Day’s card while all his friends clutch handfuls. And their hearts will swell a bit when this rambunctious bunch bonds together at the end.

The cast directed and choreographed by Patrick Fitzwater slips inside these roles without winking at the audience. Most have come up through the ranks as part of the unofficial Slow Burn Repertory Ensemble Company. A couple have had star spots, but mostly they have been second leads or chorus members. Having benefited from the growing opportunities (both senses of the word) at Slow Burn, this show underscores how a new generation of dependable actors is emerging and how this company has been nurturing them.

For instance, Cameron Jordon, recently nominated for a Carbonell Award as the wild man narrator in Slow Burn’s Rock of Ages, is perfectly cast in the lead as the sweet hapless round-faced Charlie. It’s tough to make a fulcrum out of an eternal loser, but Jordan succeeds with a winsome appeal.

Sahid Pabon, loyal member of a dozen ensembles, is the anthropomorphic Snoopy whose flights of fancy and imagination nearly stop the show with his ebullient song-and-dance numbers like “Suppertime.”

Nicole Kinzel, yet another veteran of chorus lines for Slow Burn, MNM Theatre Company, Broward Stage Door and the Wick Theatre, finally gets a chance to show off her fine singing and comic chops in the spotlight as the crabby Lucy.

Kristi Rose Mills, who had the female lead in Rock of Ages, is delightful as Sally, savoring the “My New Philosophy” number that made Kristin Chenoweth a star in the 1999 revival.

Her partner on the song is Robert Fritz who dives into the persona of the thumb-sucking Linus. Rick Pena, an original Slow Burn company member who also creates the costumes, leads the cast in a paean to his hero Beethoven.

Fitzwater’s dance ideas are charming such as Linus dancing with his blanket stretched out with an actor inside. The cast was drilled in the digitized score by musical director Michael Ursua. The scenic design by Jodi Dellaventura quoted Schulz’s simple colorful drawings, along with props by Matthew Korinko and Fitzwater.

The 1967 musical was composed originally by Clark Gesner who acknowledged the script was penned by himself, cast members and even the production staff.  In 1999, a revival featured additional dialogue by director Michael Mayer (American Idiot and Spring Awakening) and composer Andrew Lippa (The Wild Party) who added songs and jazzed up the arrangements. That production provided breakout Tony-winning roles for Chenoweth and Roger Bart as Snoopy.

It’s all a pleasant evening that families can attend knowing that each age group will find something to bring a smile to their face.

You’re A Good Man Charlie Brown presented by Slow Burn Theatre Company plays through March 10 at the Abdo New River Room, Broward Center For The Performing Arts, 201 SW 5th Ave., Fort Lauderdale. Performances are Thursday through Saturday at 7:30 p.m., Wednesday at 2 p.m. and Sunday at 1 and 6 p.m. Running time 1 hour 45 minutes with one intermission. Tickets are $50-$60. Call (954) 462-0222 for tickets, at www.browardcenter.org or #Ticketmaster.com; in person at Ticketmaster outlets or the Broward Center’s Auto Nation Box Office. Info at www.slowburntheatre.org. The musical moves to the Aventura Arts & Cultural Center March 14-17.