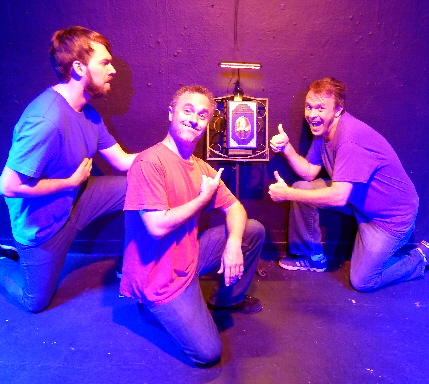 The running time for The Complete Works of William Shakespeare (Abridged) (Revised) is advertised at 90 minutes including intermission. On opening night at Evening Star Productions, it ran two hours and five minutes.

This is a testament to how downright hilarious this production is (because actors have to hold for laughs), the advantage of an atypically participatory audience of partisans to interact with, and a yin-and-yang vibe of sloppy undisciplined anarchy.

No question that everyone on stage and in the nearly sold-out audience of friends, colleagues and supporters was having a hell of a good time. It’s difficult to assess whether this will play half as well with a half-filled theater of stonier defiantly “entertain-me-buster” audience.

But it’s got a good chance. The play has been popular in varying forms and updated versions over nearly 30 years. More importantly, this cast of low comedy clowns whom Shakespeare would have embraced, Edward Scott, Seth Trucks and Alex Weiss led by neophyte director Savannah Rootes, luxuriates in this lunatic groove like it’s home sweet home.

The premise is three actors performing a tongue-in-cheek survey of all 37 Shakespeare plays (with a nod to the sonnets) in 90 minutes, a seemingly impossible task. How they accomplish that is the hook. While it helps a bit to know the canon to get the inside jokes, the proceedings are pure slapstick vaudeville needing no real knowledge of the Bard.

Othello is retold in a rap version because it comments on the “African-Italian condition.”  During a modern dance retelling of Troilus and Cressida, one actor repeatedly throw slices of salami at a cast mate.

Titus Andronicus is performed as an unhinged television cooking show with one actor putting his hands through another’s sleeves as the meal is prepared – a baby doll cut up with a cleaver. (Shakespeare’s fans know that Titus is one of the goriest plays ever written with the title character getting revenge by baking a queen’s children into pies for her to eat).

The second act is mostly a truncated retelling of Hamlet ending with a manic recap in less than a minute and that whole bit re-performed backwards.

Sixteen comedies are reduced into one mash-up because, after all, the plots are all the same anyway: twins, mistaken identities, a woman dressed as a man and a shipwreck, or as one actor puts it “Four Weddings and a Transvestite.”

All of the history plays are performed as a football scrimmage with various members of royalty passing the crown to the accompaniment of play-by-play commentary.

The Scottish Play is basically a quick warning from one witch not three, then the climatic duel in which Macduff calls Macbeth “haggis breath.”

The Revised reference means Trucks sings Pharrell Williams’ “I’m Happy,” a lesser known play is retitled here as Two Mobile Kinsman as a nod to Bill Gates and Steve Jobs, and there’s a reference to Hamilton.

While there is a script, productions are encouraged to improvise, riff off the unique vibe of that night’s audience, to insert topical references, to include the stage manager or light board engineer in the proceedings, and to generally go where the supreme silly gene takes them. The Evening Star trio take that permission slip and roam the halls with it, lampooning everything from literature to psychology to pop culture.

At the risk of sounding like a spoil sport, it sometimes gets out of hand, especially when they succumb to the seductive encouragement pouring across the stage and let the audience take control of the show. Truly, the evening runs a good 15 minutes too long even though the driving motor never stops revving. For instance, there’s an audience participation section that goes on and on in which everyone is asked to help portray warring sections of Ophelia’s id, ego and superego. There’s also a way too long bit about one actor’s obsession with Grey’s Anatomy and Shonda Rimes. We got it the first three times it was used.

All of the actors have performed Shakespeare before although only Trucks gets to show off his chops in the sole bow to the Bard’s genius: After Weiss is unable to get through “To be or not to be,” Trucks slips into Hamlet’s Act II speech to Ros & Guil about what a “sterile promontory” the world is.

The young Rootes is an alumni of the tech side of Evening’s Star’s parent group, Sol Children Theatre; she stage managed an earlier version of the show. Given the craziness of the material here and the skill sets of her older cast members, it’s hard to know what any director has contributed to shaping any production of this work. But she has created an environment in which her cast can let loose.

She and they clearly subscribe to the old Rowan & Martin’s Laugh-In philosophy that you throw everything at the wall and see what sticks (in this case, salami) and if you don’t like this joke, another is close behind.

If this sounds intriguing, get tickets now because this is a short run. If your taste is to more to traditional Shakespeare, Evening Star will perform A Midsummer Night’s Dream Aug. 5.-21 adapted and directed by Trucks.