Fandom And Great Music Are Key To Always… Patsy Cline 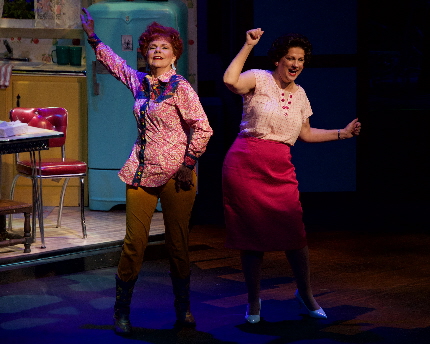 Avengers loyalists are sitting through a three-hour-movie without a bathroom break, fanatics in London are getting tattoos resembling the Iron Throne, one friend of mine dresses up like a Klingon and another has seen Bruce Springsteen On Broadway more often than Deadheads saw Garcia.

Fandom in its purest form is something akin to a force of nature that defies derision and invites as much as grudging if bewildered respect as any other human paradigm rooted in our inner being.

This may seem a hifalutin’ way to begin a review of Always…Patsy Cline which gifts the audience at the Wick Theatre with recreations of about two dozen hits from the iconic country singer’s catalogue. But while the music is undeniably entertaining, this weirdly hybrid bio-musical also delves into the nature of fandom – at least in this production thanks to a bravura turn by Lourelene Snedeker and directed by Dom Ruggiero.

Actress Terri Dixon channels the sound of the groundbreaking country singer, nailing everything from “I Fall To Pieces” to “Crazy” to “Walkin’ After Midnight,” plus an array of hymns and early rock n’roll. The audience opening night was clapping along and quietly signing along under Dixon’s spell.

But what was just as memorable for those paying attention was how Snedeker and Ruggiero created the embodiment of an everyday blue collar divorcee who joyfully finds validation in hearing the words and sentiments of her life being proudly announced to the world by a talented celebrity who, as the singer-songwriter Nanci Griffith said, “seemed like (she)’d been reading my mail.”

Snedeker plays the real-life Louise Seger, a salt of the earth Mississippian who fell in love with Cline’s music on the radio and met her at a Houston concert in 1961. The women struck up a friendship that they nurtured for a few years through letters that Cline signed with the phrase that became the title of this show.

Ted Swindley, who created this much-produced work in 1988, has Louise narrate the story, has her participate eagerly in the Houston concert as a kind of aide de camp and depicts how the women bond in confessionals about their common troubles with men, inequality and the like.

With bottle red hair and a twanging Southern pizzazz, Louise at Patsy’s urging helps keep the band in line, singing and dancing herself with abandon. Snedeker the actress, precisely like Louise the fan, holds nothing back in her enthusiasm that includes slightly blue humor and sashaying on the stage with her backfield in motion.

The miracle is that what Snedeker and Ruggiero create, while intentionally way over the top, is not laughable. Louise’s ability to believe in something or someone so completely, so willing to make a fool of herself is almost something the rest of us yearn for. It’s because when Snedeker/Louise’s eyes are on fire, you know it’s the joy of someone who feels like they’ve finally been heard, that someone is singing for them and about them. She says, “Patsy was as much us as we were.”

Those unfamiliar with Snedeker won’t notice, but anyone who has been attending theater in South Florida for more than a couple of years knows she has an astounding range, a morally compromised German collaborator in Primal Forces’ Blonde Poison or her grounded nurturing Abbess singing “Climb Every Mountain” on this same stage which won her one of her four Carbonell Awards

Yet you never doubt the countrified woman in tight mustard colored pants and a paisley, yoked cowboy blouse uttering smoothly, “He could have fallen through his butthole and hung himself.”

Playing Patsy has provided a cottage industry for perhaps a dozen actresses who seem to do the role around the country. So when the original casting choice at the Wick reported injured, the theater quickly found Dixon who had done the show before and performed Cline’s music in other kinds of shows.

Dixon’s acting performance may be a bit tamped down and she may not have Cline’s God-given charisma, but can she ever sing the hell out of these numbers with emotion and a Memorex-quality reproduction of Cline’s rich, expressive contralto – a pure joy for anyone who remembers these numbers and a no-excuses-needed introduction to those who don’t.

Once again, give credit where credit is due. Producer Marilyn Wick has not spared a dime on what is often chosen as a budget-saving title in a season: The scenic design by Kyle Gosley and Kimberly Wick includes an Opry-type stage and Louise’s kitchen replete with period perfect kitschy props, the ever changing lighting by Thomas Shorrock, the wigs by Douglas Lucas, Josieu T. Jean’s projections of Cline programs and photos, and Jim Buff who, instead of settling for two of three costumes for Patsy, has given her an entire wardrobe reflecting her stylistic changes from a red with white appliques and fringe cowboy dress to a pearls and cocktail dress outfit.