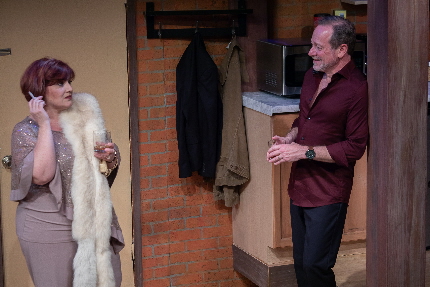 When did yesterday’s renegades, who skirted AIDS and lived boheme on a ramen noodle diet in the go-go eighties, become today’s get-off-my-lawners, complaining that the volume in movie theaters is too loud? And are there still rebels in the youth of today—or is it just a generation of coddled, distracted solipsists symbiotically attached to their smartphones?

These questions, and plenty more, linger between the lines of Mr. Parker, Michael McKeever’s elegant dramedy world-premiering at Island City Stage. McKeever himself plays the title character, in a part that is probably closest to his natural personality.

Terry Parker is a 54-year-old gay man, widowed for the past seven months after the accidental death of Jeffrey, his partner of 30 years. He’s been stuck in an emotional and professional paralysis since Jeffrey’s passing, and only now has he worked up the motivation to visit a bar, upon which he drinks too much and comes home with a millennial. It could happen to anybody, right?

We pick up the story the morning after, in Terry’s makeshift love nest—aka Jeffrey’s former atelier—a chic hovel with exposed brick walls, a hip skylight and carefully curated artwork designed by Ardean Landhuis. Too abashed to bring his one-night-stand to his proper residence, Terry has retreated here instead, and Justin—or is it Kevin?—has made himself at home.

The 28-year-old hookup, played by newcomer Samuel Maya with an admirable lack of inhibitions, is first seen fully nude, emerging from a shower with a towel around his neck, hummingMargot  a Third Eye Blind hit. Maya makes this potentially provocative introduction seem perfunctorily common, the stuff of Justin’s everyday life.

It’s Terry who seems out of sorts in his own domicile, watching with befuddled curiosity as this airbrushed specimen seems more at home than he does. “I feel like I’m in a Fellini film,” Terry says. A few minutes later, while trying to keep pace with Justin’s chatterbox persona, he adds, “Talking to you is like playing air hockey.” And yet, to Terry’s astonishment, this casual encounter might become something more.

McKeever originally conceived Mr. Parker as a single-scene, real-time conversation between a 50s-ish man and his 20-something pickup, each acting as a de facto emissary for his generation: the life-hacking, tech-forward millennial and the boomer dinosaur still clinging to his landline, his CDs and his AOL account. (I should add that, as someone who just barely qualifies as a millennial, I still have all three of these things, thank you very much.) Much of this material made it in, delightfully, to the final draft of the play, but its scope has expanded to include more scenes, a third character—Cassie, Terry’s ruthlessly practical sister-in-law and Jeffrey’s business manager, played by Margot Moreland—and a weightier dramatic canvas.

As it plays under the direction of Michael Leeds, it’s the nervy exchanges between Terry and Cassie that form the emotional heart of Mr. Parker, she trying to negotiate a Whitney retrospective of Jeffrey’s photography, and his self-imposed inertia impeding its progress. Their differences run deeper than business decisions, however, and Leeds brings out top-notch performances from both actors; their scenes together, often acted with authentic, overlapping dialogue, have a two-pros-in-the-ring crackle.

Moreland embodies a character that has been called an “impressive monster” in a magazine profile, but she delves beneath the surface of Cassie’s designer couture and aggressive voicemails, adding layers to her initial antagonist through a nuanced and, finally, compassionate interpretation. McKeever’s performance likewise deepens as Terry is forced to confront Jeffrey’s final days anew, the pain and guilt and resentment exhumed and renegotiated.

Maya, though exhibiting a youthful swagger and comfortable embrace of the production’s most sensitive requirements, is not yet on his colleagues’ level. The slack millennial personified, his work here is serviceable but surface-treading, his every line reading cut from the same dispassionate cloth, even when the tenor of the moment demands more dimensions.

Mr. Parker hums with the smooth patter of many a McKeever comedy, but it ultimately has much to say about grief, coping and letting go of unhealthy tethers to an irreplaceable past—timeless themes that resonate well beyond the play’s acute critique of our tech-driven zeitgeist. Moreover, for a playwright whose best work of late has reached bleak and/or oblique conclusions about topics ranging from severed relationships to school violence to complicit fascism, the stately and unequivocal closure of Mr. Parker might just be the therapeutic balm we’re looking for.