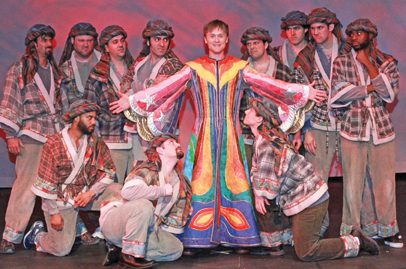 Frequent theatergoers approach productions of Joseph and the Amazing Technicolor Dreamcoat with fatigue. Most have seen it at least four times including at the Maltz Jupiter Theatre in December. When someone says the score is infectious, and it is, they long for a dose of antihistamine.

So it’s heartening to report that the latest edition by Actors Playhouse is a playful and imaginative riff that will entertain audiences who haven’t seen the Andrew Lloyd Webber-Tim Rice musical in a while.

The spoofy trifle benefits from a huge cast that never lets up on the energy level. But the real stars of this production are Director David Arisco, Choreographer-Musical Stager Barbara Flaten and Musical Director Eric Alsford who imbue the procession of production numbers with the irreverent feel of a cartoon by Warner Brothers or maybe the Blues Brothers.

Frankly, a lot of people are Joseph-ed out by now, but Arisco and Company have heavily peppered the oratorio with scores upon scores of unique touches of silliness that make you laugh against your better judgment. When Pharaoh sings that something is a piece of cake, the Narrator drops off a plate of layer cake in his outstretched hand. When Joseph is sold by slavers to a businessman, they whip out a credit card processor. When Joseph gives his brothers a sack of food to get them through the famine, they find a bag inside from McDonald’s.

For Joseph virgins, the musical is an irreverent retelling of the Old Testament tale as if a group of school children are being spellbound by a storyteller. Lloyd Webber intentionally made the goofy score a pastiche of styles encompassing Broadway showstoppers, a calypso number, a country-western tune, a French drinking ballad and several strains of rock ‘n’ roll.

It’s meant as an over-the-top mugfest. Not only should  you not look for a message, I defy anyone to cogently express what the message is other than something about dreamers have to have a dream and dream their dream or else they’ll never have a dream to dream when they can no longer dream about when they had a dream about having a dream. Or something like that.

This Joseph is a massive undertaking including a cast of at least 26 adults, most of whom double and triple in other parts, plus a children’s choir of 30 voices (a second shift of kids will take over halfway through the run).

But the success of any Joseph still relies on its two leads and Actors Playhouse has two strong smooth performers in Josh Canfield as a fresh-faced Joseph and Amy Miller Brennan as the genial Narrator. Certainly, Canfield (the religious partner in Caldwell Theatre’s Next Fall) and Brennan (Nancy in the Playhouse’s Oliver) don’t set the house on fire, but both have more than enough amiability to win over the audience and undeniably melodious voices to caress the score.

Nick Duckart, the doctor in the Playhouse’s Next to Normal last month, is a delightfully daffy Pharaoh giving the Elvis impersonation required by the role.  Decked out in Egyptian blue eye shadow and ‘50s sideburns, Duckart nails the goofball groove better than anyone else in the cast other than the rubber-faced David Perez-Ribada as Jacob’s brother Benjamin.

Noteworthy as well are Christopher A. Kent, a long-time Playhouse stalwart who channels Lumiere from Beauty and the Beast in his droll rendition of  “Those Canaan Days;” Walter Kemp II (late of Hairspray) delivers the lively “Benjamin Calypso,” and Henry Gainza, (the Playhouse’s William Barfee in Spelling Bee), ratchets up the energy quotient with Grand Ole Opry style “One More Angel in Heaven.”

Arisco has cast most of the musical theater actors in town not working somewhere else. The chorus includes usual leading actors Renata Eastlick (Kiss of the Spider Woman at Slow Burn), Colleen Amaya (The Music Man and Guys and Dolls at Stage Door), Sarah Amengual (the daughter in Next to Normal), Celia Louis Merendi and Nikki Allred (both just off Hairspray) and Clay Cartland (last summer’s standout in Song of the Living Dead). That’s the chorus. Half of it.

The youth chorus is not window dressing or a just way to get parents to buy tickets. Sitting on stage all night, they sing more and interact more here than in other recent productions. Not only do they give the production some aural heft, but Youth Choir Director Earl Maulding has molded them into a single unit with clear enunciation. No small feat there.

Flaten’s choreography and musical staging are in a class by themselves, covering the wide stage with everything from a hoedown to a tango. Sometimes it’s especially inventive, other times it uses classic moves as an intentionally satirical comment. For instance, when Joseph’s brothers hatch their dark plot, the music and dancing briefly toys with the ominous finger snapping of West Side Story.

Alsford has allowed the cast to have fun with the score, letting Joseph and the Narrator indulge in a little American Idol melisma that Lloyd Webber likely didn’t notate in the score. During the country number, Alsford has a soprano sing an accompanying figure that isn’t on any recording I’ve heard, but perfectly mimics those Riders of the Purple Sage ballads.

Actors Playhouse had a major success with show in 2000, winning eight Carbonell Awards, and it has borrowed liberally from that production. Notably, the set design is based on the one a decade ago by Michael Amico, the eminence now ensconced at Palm Beach Dramaworks. It’s apparently meant to evoke a child crayoning in a coloring book. Unfortunately, it looks that way, cheap and half-baked.

That clashes with the sophisticated costume design from 2000 by the now retired Mary Lynne Izzo and coordinated today by Ellis Tillman. Those designs are impressive, from the earth-colored nomad togs for the brothers to the stunning Liz Taylor Cleopatra dresses for Ramses’ female courtiers.

After the disastrous sound quality at Hairspray earlier this year, designer Alexander Herrin ratcheted up the audibility and clarity for Next To Normal. His sound quality for Joseph may even be better; every word is as clear as each individual singers’ diction allows.