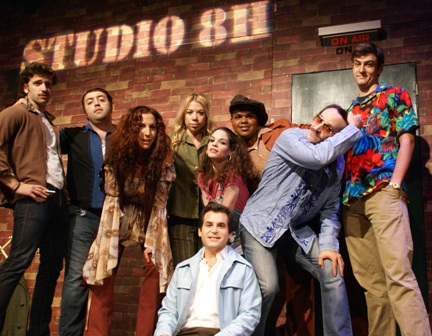 New Theatre’s debut of the new, locally written work, Not Ready for Prime Time, has a way to go before it is actually ready for prime time. Kudos, however, to this theater company who has built a reputation on embracing new plays and playwrights. With a few more tweaks and an injection of depth, Not Ready for Prime Time could be a hit that has legs beyond South Florida.

The premise is here, for sure. Take a pop cultural icon — NBC’s groundbreaking late night comedy show, Saturday Night Live — and re-create its impact not only on the lives of those involved, but its force on popular culture and television. All the notions are present in the script, they just don’t entirely come together to make any brave statement. It’s not the fault of the gifted actors, either, since the cast, for the most part, is top notch.

The play, written by Erik J. Rodriguez, a student at Florida International University, and Charles A. Sothers, who has appeared as an actor at New Theatre, and debuts his first play, was embraced by New Theatre’s talented artistic director Ricky J. Martinez, who also directed Not Ready for Prime Time.  Martinez’s hand is evident in how the show moves in and out of the lives of the players, and to the on-stage dichotomy of the comedy troupe and their producer writing and starring in the demanding on-stage sketch comedy of SNL.  The young playwriting team sat in the front row on opening night, dressed in suits and ties, and beamed and chuckled in all the right spots.

What’s missing from Not Ready lies in the writing — that three-dimensional, behind–the-scenes bio grit that this attempt calls for, but is lacking. The characters conjured by Rodriguez and Sothers never really feel the pain of drug abuse, the real angst of show biz backstabbing, divorce, sex addiction, women’s rights, getting-too-famous-too-fast — they merely talk about it. Gilda Radner (Jennifer Jill Lehr) wearing overalls and a cheeky personality hides an eating disorder; Jane Curtin (Melissa Ann Hubicsak) is the den mother of the group, wound too tightly and all business in a very buttoned up way; Laraine Newman (Susie Taylor) is a heroin addict, sneaking away from the others to privately shoot drugs; Garrett Morris (O’Neil Delapenha) and John Belushi (Zack Myers) also have drug problems that overshadow everything else; Bill Murray (Luis Daniel Ettorre) is the new kid on the block who has to deal with bullying; Dan Ackroyd (Ivan R. Lopez) is a sex addict, and Chevy Chase (Danny Leonard) is a self-centered egotist. They all have problems, but nothing every bubbles below; it’s all presented on the surface.

SNL creator Lorne Michaels (David Samson) is the other egotist, and also the narrator, hell bent on getting his show off the ground, doing whatever it takes to make it happen, and wanting to make history in the process.  He runs around barking and chirping, the stereotype of a high-strung creative type.

For those too young to remember the early days of SNL, or anyone that doesn’t have familiarity with the late-night comedy show, some of the appeal will be lost since Not Ready for Prime Time remains limited in its focus. There aren’t universal themes or takeaways that resonate with an audience. It’s like television itself — there’s not much to do but, well, watch.

The show does have some interesting bells and whistles built in. Michaels’ conveys the story from his P.O.V, however, in the second act, that’s stripped away from him and the cast has their turn to “tell it like it is” — this is a nice device. Studio Monitors Clara Hernandez, Erica Herrera, Christian Benabe, Wykeem and Randy Prophete appear every once in a while holding cardboard placards that signal the audience for “applause” or “ooos,” a nice touch that keeps the live studio audience ambience intact.

They’ve also cast a quasi-local celebrity in the lead role as Michaels. Miami Marlins president and CBS Survivor contestant Samson is definitely a draw. Whether this was intentional or not, it could be a good marketing tool if the show goes on the road, i.e. filling that role with someone of name recognition.

Interspersed into the play, but not nearly enough, are SNL sketches and references to some of the early popular characters that still resonate in the public domain, such as Radner’s Rosanne Rosanna Danna, Chevy Chase’s original anchor tag, “I’m Chevy Chase and you’re not,” and Ackroyd and Belushi’s Blues Brothers, who close the show with a lively audience participation.

New Theatre’s attempt to get as close to Michaels’ mantra of creating a show that was “absurd, young and hip” gets applause for originality. Hold up the “ooo” card, however, for not going out on a limb and mining the depths of absurdity, emotion, all wrapped up in the trappings of celebrity.