‘No Way To Treat A Lady,’ About A Serial Killer Is Just A Light Musical Comedy — Really 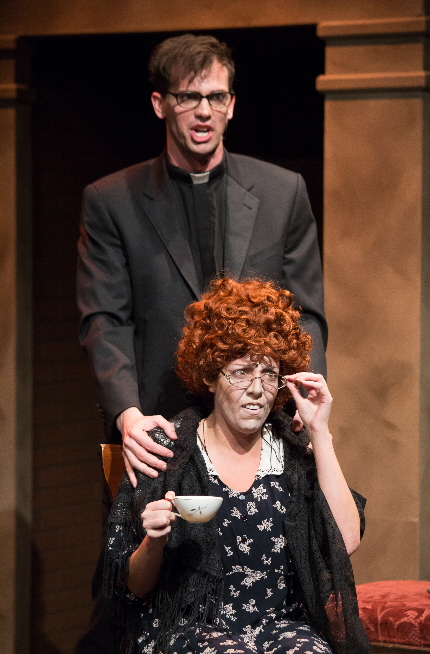 Other than Sweeney Todd, American Psycho or Jekyll & Hyde, there have been few musicals about a homicidal maniac. As far as peppy musical comedies with the accent on comedy, there’s only been one about a schizophrenic serial killer, No Way To Treat A Lady.

But Broward Stage Door has taken on this decidedly off-beat tuner about a put-upon New York City detective still living with his Jewish mother and tracking a failed actor who dons different personas to get in the apartments of lonely ladies he plans to strangle.

The 1968 film source material starring Rod Steiger was shot through with droll urban wit and black gallows humor, but it succeeded as a suspenseful crime thriller. This 1987 musical by Douglas J. Cohen is a broad cartoon, which in every facet from score to script, resembles those pleasant, entertaining musicals of the mid-1960s that sent audiences into the street with a broad smile on their faces and an inability to recall the tune or lyrics of a single number, let alone a line of dialogue.

The story is set in the summer of 1970 (established with various period cultural references like the Fanny Farmer Cookbook). NYC Homicide Detective Morris “Moe” Brummel (Dustin Cunningham) is a schlubby teddy bear on the cusp of middle age, possibly competent at his job but socially insecure and still living with his archtypical kvetching interfering Jewish mother Flora (a perpetually outsized caricature by Kimberly Abrams).

In a better end of town, Kit Gill (James Hansen) is a handsome fey actor trying to cope with the memory of his mother who has just died, a legendary stage diva who was as impossible to satisfy as Flora. Initially here, it’s not made even remotely credible that he would or could kill anyone, let alone why he’d do it., But Gill puts on disguises and accents to invade the apartments of old ladies (we later learn they remind him of mother). Apparently unable to get acclaim for his stage work, he taunts Moe on the phone after each kill, seeking increasingly prominent newspaper coverage.

Meanwhile, while investigating a murder, Moe interviews the lovely young wealthy Sarah (Andrea Arvanigian) who works at an art gallery. They are mutually smitten-at-first-sight.

The symbiotic reliance of Moe and Kit as they “rise” in their respective professions raises the only serious issue in the show as their fates intertwine to the detriment of Moe’s relationship with Sarah. One high point is a trio singing ”I’ve Noticed a Change” in which Mo is simultaneously pounded for attention by mom, girlfriend and murderer.
.
A cute twist is that this is a chamber musical with only four performers. Abrams plays the detective’s mother, the killer’s mother and three distinctly different victims.

Cohen’s tunes, ranging from pseudo-soulful ballads to bouncy comic turns, are diverting, and the lyrics careen between witty to banal. The best numbers are the dueling duets of soliloquies between Kit and Moe (both men open the show contrapuntally wishing for “a life”) and the trio or quartets among the characters. The solo numbers? Enh.

Director Peter J. Loewy understands Cohen’s kitschy jocular vibe and keeps his cast from taking anything too seriously. As in the film, the funniest scene is when the ultra-goy Sarah (played in the film by Lee Remick) charms Flora (played on celluloid by Eileen Heckart) during an inaugural visit with precisely targeted flattery, invoking some Yiddish she learned the night before and by dissing the hapless Moe who is standing in the room.

The film and original novel by legendary novelist-screenwriter William Goldman (Butch Cassidy and the Sundance Kid, The Princess Bride) were reasonably well-constructed. But Cohen’s script wants to get on with the narrative quickly, so you have to ignore several logical leaps such as Gill somehow figuring out that Morris lives with his mother as well as her phone number.

The performers’ singing voices are strong and vibrant; their acting is adequate if not outstanding, although Loewy and Cohen have Abrams chew scenery as if she hasn’t eaten anything for days. (Abrams and Cunningham are holdovers from this winter’s The Most Happy Fella at Stage Door.)

The work hasn’t been done often, although a revival was mounted at Manhattan’s York Theatre Company in 1996. It was successful enough to be held over its original run at Stage Door in 2005 and had been mounted in 1998 at Coconut Grove Playhouse.

Something in this production doesn’t quite land solidly, but there’s an adorable puppy dog quality to its scruffy woebegone ambiance, so audiences will likely enjoy themselves. Even if they can’t remember a word of it later.