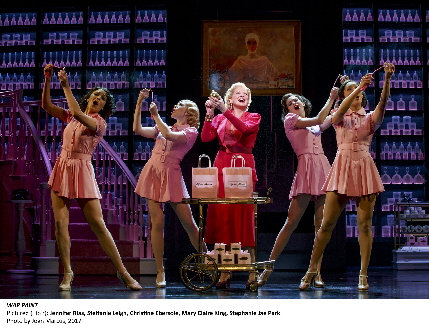 We’re back from our trip to New York to scout out productions you might want to see (or not), shows that might tour South Florida and scripts that might be worth reviving in our regional theaters.  Other shows—all nominated for Tony Awards on June 11 – that we will review in the next few weeks are Groundhog Day, Oslo, Indecent, Bandstand, The Play That Goes Wrong, Six Degree of Separation and Natasha, Pierre and the Great Comet of 1812.

Face it, it’s all about Patti and Christine.

Looking back at my notes, the musical War Paint seems to be about so much, including society’s objectifying obsession with glamour, the true nature of beauty, the glass ceiling, and prejudice against women, Jews, immigrants and any kind of social outsider.

None of that is what you will remember after the curtain falls, not the craftsman-like work of the bookwriter, composer, lyricist, director nor the visual team. It’s all solid, no-asterisks product, but not especially outstanding other than the incredible period costumes.

War Paint is primarily an opportunity to savor two of Broadway’s reigning divas Ms. Patti Lupone and Ms. Christine Ebersole commanding the stage with overwhelming power in volume and skill. This show will not last ten minutes after one or both leave (no matter which boldface name replaces them) and it will not (or should not) tour. So see it now in New York because double acts of this quality don’t come around often.

Doug Wright’s script traces the simultaneous rise and bitter rivalry between Jewish Polish immigrant Helena Rubinstein (Lupone) and Canadian farmgirl Elizabeth Arden (Ebersole) who reinvented their pasts, their names and their personas to conquer the world of beauty products, becoming among the first female CEOS of a major American business.

The problem faced by the creative team hoping to pit these two characters and performing talents against each other is that in real life it’s doubtful the two ever were in the same room. On stage, they only meet at a fictional event near the end of their lives. Each are physical opposites; each has a unique voice. And they don’t sing a sisters duet even at the finale.

But Wright turned that to a positive along with the help of director Michael Greif (Rent), composer Scott Frankel and lyricist Michael Korie (all four alumni of Ebersole’s Grey Gardens).

Instead, their lives are played as counterpoint to each other in separate book scenes. Wright does have them accidentally be hidden in separate banquettes at tony restaurants to overhear each other’s laments of how lonely it is at the top.

But the creative folks are no fools. They have both women several times sing alternating verse-choruses of the same song, criss-crossing the stage and each others’ paths on a diagonal as if they were wandering in their own world. And then at the finale of some songs, they sing the words together. As a result, the protagonists are shown to be in some ways quite different and yet sharing crucial similarities such as intelligence and an indomitable force of will.

Wright, the Pulitzer-winning creator of I Am My Own Wife, is not writing some adoring portrait. He admires their achievements despite societal odds, but he also acknowledges their flaws including a self-destructive obsession that essentially uses people with little concern for them as human beings – such as husbands and lovers. In a likely fictional meeting at the show’s end, the writers allow the women to be proud of what they have achieved, but also allow them and the audience to question the wisdom of their ultimate legacy in a society that prizes appearance over substance. In fact, the audience may only care about these flawed people because the performers have such innate charisma.

The show asks the right questions: Why were (are) businesswomen criticized for the same ruthlessness praised in a businessman? Why were women and Jews only allowed just so far into the societal hierarchy? To succeed, did they really have to give up a normal life and normal relationships? Is the pursuit of artificial beauty a blessing or a curse or both? Did they enable the subjugation of women by glorifying their objectification? All of this is touched on, but never answered. That lack of taking a stand makes the questions feel inserted to give heft to what is, at heart, a Lifetime Movie soap opera.

The creative team knows where its strengths lie. Both women obviously get an 11 o’clock cri de coeur number, and both singly or together end songs with long-held powerhouse notes that seem to need no amplification. Neither visually ages much during the show; accents sometimes come and go. But who cares? Both performers are singing actresses who can put across conflicting emotions ripped from their marrow through expert application of nuance and phrasing. Both women have been nominated for the Best Actress Tony although only an idiot would bet against Bette Midler.

The cast includes dependable Broadway stalwarts Douglas Sills and John Dossett as husband-lover-employees who feel betrayed and go to work for the other woman. But even though they get the de rigueur number in which they compare notes in a bar, it’s not their show.

Like Wright’s script, Korie and Frankel’s score can expose the women’s inner feelings, but it’s also suffused with a kind of clear from-the-outside criticism of these women with a nimble tongue-in-cheek humor.

Everything about the production — Christopher Gattelli’s choreography to David Korin’s Tony-nominated sets to Kenneth Posner’s lighting – everything is melded by Grief’s staging to accentuate style. This is especially evident in Catherine Zuber’s Tony-nominated breathtaking parade of extravagant fashions and hats ranging from 1935 to 1964. They are just a shade more vivid than real life, once again helping satirize the issue of fad-influenced fashion and shallow definitions of beauty.

War Paint is a celebration of panache, the power of reinvention, determination, resilience and style.

But what it really celebrates is that unique brand of entertainment that you can only find off Times Square in which superior name-brand performers exercise their chops in that American art form, the musical comedy.

War Paint is playing an open-ended run at the Nederlander Theatre. 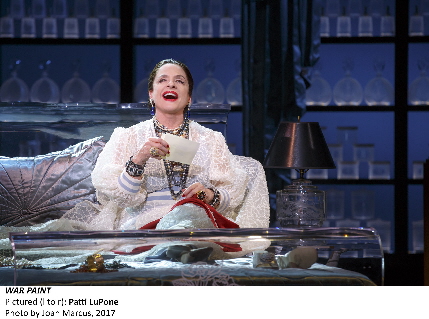