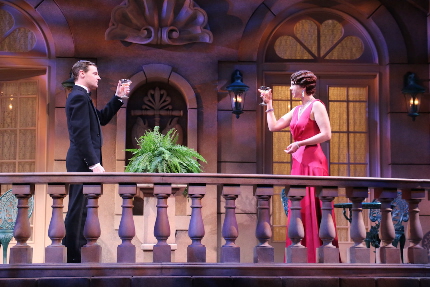 Take Noel Coward’s sophisticated wit, add exquisite direction and elegant acting, then tie it up with visuals you could plotz for, and it’s no wonder that Riverside Theatre’s production of Private Lives is, simply, a study in perfection.

The classic 1931 comedy Private Lives revolves around argumentative Elyot and Amanda, who once were married to each other. By chance, they meet again on a shared terrace at a French seaside resort where they are both spending their honeymoons with their new spouses — Sibyl and Victor. Verbal sparring soon turns to a romantic embrace and they sneak out with each other to try once again to be happy as a couple. Here, as he did in his later plays Blithe Spirit and Present Laughter, Mr. Coward takes a jab at marriage and love and how the two do not always go hand-in-hand and how the best way of handling a squabble is by tip-toeing out.

This is indeed the stuff from which situational comedies are made, but under the polished pen of Mr. Coward, it is merely the background for crackling, urbane wit. The play endures with its worldly, insouciant characters who throw out one-liners as easily as they down champagne. Amanda insults Elyot’s new bride’s provenance with three words “Very flat, Norfolk.” When Amanda jokes that they’re living in sin, Elyot rhapsodizes “Not according to the Catholics… it’s nice that they sort of back us up.”

Because the comedy is the soul of sophistication, any production of it needs to gleam as well. And boy, does it ever shine at Riverside Theatre.

This impeccable production has all the right elements. There is vivid and funny direction by James Brennan, who throttles up not only at the swooning romance but also at the combative elements. In Riverside’s previous season’s Hello, Dolly! and Vanya and Sonia and Masha and Spike, Brennan showed us that he was as much at ease with wit and big theatrical physicality as are Elyot and Amanda. Indeed, he lets loose with a memorable, bare-knuckles fight between the two, throwing them across the stage, over tables and crashing onto furniture, slapping and tripping and all the while not flinching an inch for polite sensibilities of modern audiences.

Scenic designer Allen D. Cornell and lighting designer Yael Lubetzky bring us into a beautiful, sea-shell pink world in Act One, when all is divine. Then, in Act Two, Cornell transports us to a divine Champs-Élysées apartment in Paris where Elyot and Amanda seem to appear more like porcelain figurines about to break from all the pressure to behave.

Dressed in Gail Baldoni’s costumes which are spot-on perfect for time and character, the professional cast is as good as you could possibly imagine and deliver top notch high style period performances. Their voices and movement dripping with attitude, Jason Loughlin and Catherine Gowl fill the characters of Elyot Chase and Amanda Prynne with smart, character driven attitude. Not at all to be cast into the shadows, Spencer Plachy and Liana Hunt bring big notes to Victor and Louise as well; in fact, Plachy does such a good job in this 1930s high style posturing you’d swear you were watching a matinee idol. And as the maid, Andrea Gallo brings big laughs with her understated walk-on.

Loughlin appeared on Broadway in The Audience with Helen Mirren. Gowl is also a puppeteer and toured with War Horse. Plachy appeared on Broadway with Orlando Bloom in Romeo & Juliet and has been directed off Broadway by Moises Kaufman. Hunt has toured as Nessarose in Wicked and was Katherine in Newsies on Broadway.

Although with three acts and a running time of nearly two and a half hours, some people might sigh “Very long, Private Lives.” Nevertheless, this production is smart, and beautiful and funny and just really, really excellent. I rarely use the term “Broadway Quality” not only because it is so overused by ultra-enthusiastic audience members, but also because it infers that something is lesser because it’s not on the Great White Way. However, Riverside Theatre’s production of Private Lives is as good as it gets — anywhere.