Small Membership Is A Bit Flawed But Well Worth A Peek 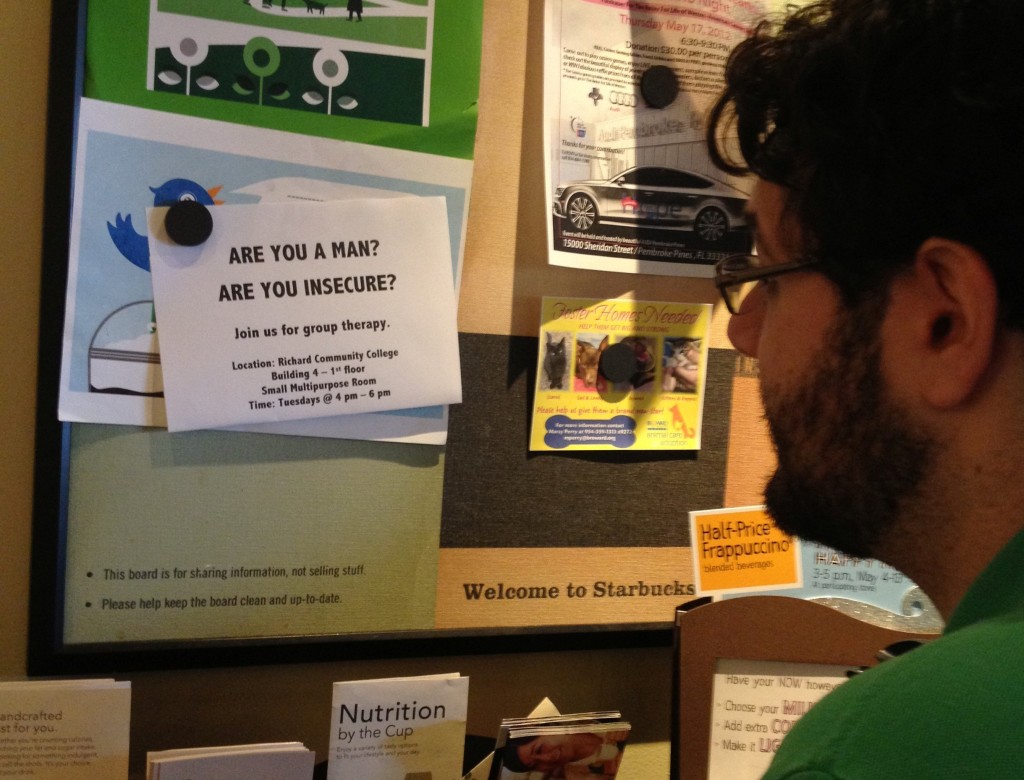 I really, really meant to avoid the puns and then discovered myself writing, quite unconsciously, that Mark Della Ventura’s Small Membership is a modestly endowed, touching and amusing package ostensibly about going through life with a less than impressive package.

The pleasant, intriguing comedy bowing at the Alliance Theatre Lab is not an overwhelming triumph; something about it doesn’t quite land as solidly as you’re rooting for it to do. But the script and performance by Della Ventura deliver plenty of chuckles and just as many winces of painful recognition when he utters razor-sharp truths. Small Membership‘s real targets are those universal feelings of social insecurities and personal inadequacy (beyond physical attributes) that cripple our pursuit of happiness.

It’s silly and irrelevant to guess how autobiographical the play is, although Della Ventura himself did slim down in the past year or so as his hero did. But his courageous and incisive observations about how groundless feelings of worthlessness will maim us are ripped out of someone’s psyche.

His protagonist, Matt, is making his first appearance before a support group for men with small penises. Over 75 minutes, he traces how this has affected his life from an uncertain childhood blighted by obesity as well the titular problem, through an agonizing adolescence so filled with rejection that he wonders about his sexuality, and into a rocky young adulthood. When his mother phones on his 21st birthday, he pretends to be dining with friends. He has none.

Matt’s tone and that of the play is wry and witty but underpinned with an unrelenting underground stream of pain, pessimism and sadness. “I apologized for everything I did… like a Canadian,” he says.

In high school, “my penis was still in middle school.” He prays to God for something larger. Instead, he finds his torso matted with body hair. “I went to bed a baby; I woke up Robin Williams.”

No surprise: The play is gleefully brim-full of double entendres, crudities and profanities including virtually every euphemism and slang you’ve ever heard for a penis and scrotum.

What rescues all this from running a bit thin or being overly mawkish is the genial persona of Della Ventura under the direction of his long-time collaborator David Michael Sirois, both key members of Alliance’s core company and the bedrock of Alliance’s season of all-original works. With a Stan Laurel squint and grin, Della Ventura once again proves to be adept at portraying affable teddy bears who are intelligent, funny and engaging.

But the evening seems as blunted as Matt. Della Ventura’s Matt is droll and moving and vital when he is acting out flashback conversations. His plaintive rendition of “What Kind of Fool Am I” in a karaoke bar is simultaneously poignant and comic.

The problem arises in his narration to the self-help group (and us), which makes up half the play. In it, he is so beaten down that it’s hard to adopt him as our surrogate. Matt is pathetic, not in the negative sense, but in the tears of a clown sense. He shambles right through punch lines and lets his voice dwindle off. Matt seems to be apologizing with an embarrassed smile for taking up our time. That certainly fits the character, but it’s a difficult dramaturgical challenge.

At the risk of giving unwanted advice, Matt needs to tell his story with a bit more energy and topspin. Not Borscht Belt rimshots, just someone who knows what he’s saying is funny and savors that modest talent.

Della Ventura and Sirois have been working on this piece for three years, trying out drafts in other venues. It’s not that the script needs much revision. The only moment that doesn’t work well is the finale. Matt is dealt a devastating blow we won’t reveal. Yet without sufficient explanation, this has empowered him to accept who he is and go forward with a shred of self-acceptance. We really need a little more explanation here to make that credible.

Jodi Dellaventura’s setting is a dead-on recreation of those generic classrooms inappropriately repurposed at night as group confessionals. The lighting by Natalie Taveras smoothly switches from the cold light of the classroom to a half-dozen other places in Matt’s mind from a dazzling nightclub to the loneliness of a late-night phone call.

In the end, Small Membership succeeds because Della Ventura depicts a nice guy we’d like to have a beer with. We can see more clearly than Matt that his feelings of worthlessness are based on vagaries that are not his fault and are not indicative of what kind of person he is. He has let these irrelevancies blight his life. And, of course, we take comfort in that because we’re struggling with our own perceived shortcomings, physical and otherwise.