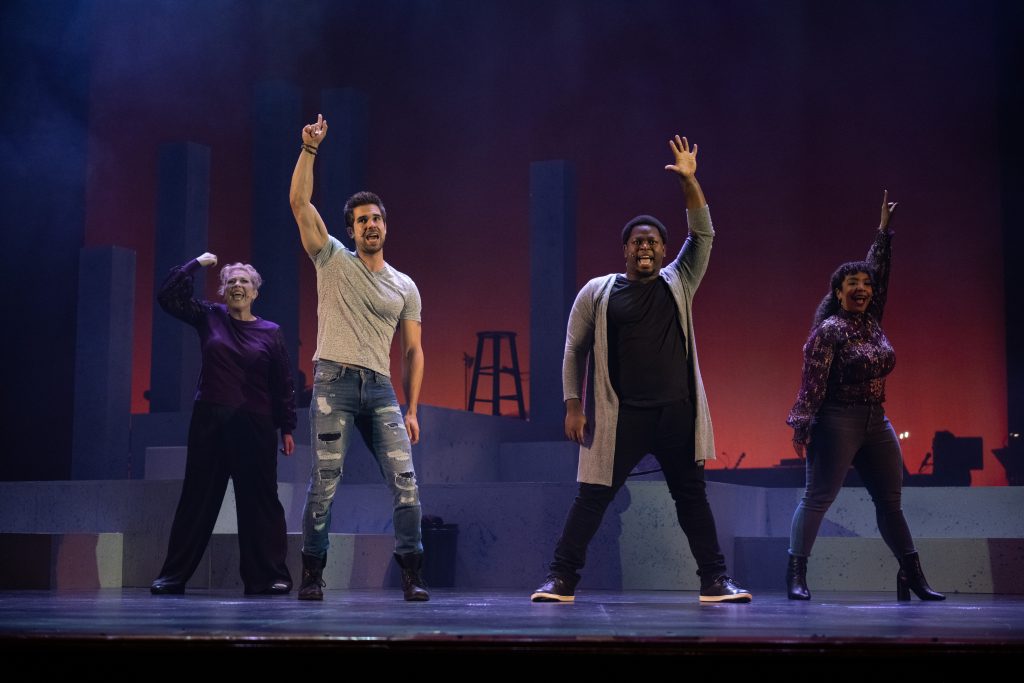 The late singer-songwriter Nanci Griffith once said an especially perceptive lyricist “must have been reading my mail.” And songstress Melissa Manchester once said that the best thing about performing music is it lets people know they’re “not going crazy all alone.”

So it is with Jason Robert Brown’s brilliantly insightful and emotionally powerful Songs for a New World –- Slow Burn Theatre’s season opener that would be a triumph even if it didn’t also signify a full-throated celebratory return of regional theater.

Far different than the large-scale, narrative epics that Slow Burn is best known for – the pandemic shuttered its much-anticipated Ragtime – 1995’s Songs for a New World is a four-person seven-musician “song cycle” meaning a curated collection of songs – not quite a revue, not quite a classic musical.

Brown’s procession of songs is suffused with soaring melodies and passionate lyrics, but it’s the internal collision of hope, disappointment and perseverance that lands these often off-beat numbers because they echo the complex, conflicted depths of our souls, or at least those of people we know well.

It might be a pregnant woman musing on her kinship with The Virgin Mary, or an inner-city teen dreaming of being a basketball star yet facing societal challenges. A materialistic woman discovering that in rejecting less affluent suitors, she has settled for something less valuable as a trophy wife.

Despite a wide range of musical styles, approaches and circumstances in its disparate episodes, the songs share a thematic core about choices… “that even when everything seems stable and certain, there is one moment that can upend and change anyone’s life. It’s about hitting the wall and having to make a choice, or take a stand, or turn around and go back,” he wrote.

Over and over, in dramatic or humorous situations, the characters are struggling with those conflicting hopes that it is “time to fly” and equally chastening experience as they face these choices – decisions that have long-range consequences.

Fitzwater’s modest almost invisible staging includes some lively touches. His metaphor is not lost on anyone when in the opening moments, an actress walks on a darkened stage illuminated only by the ghost light that guarded the theater for 18 months and her face glows with its welcome back warmth.

True, the specifics of some set-ups aren’t clearly communicated (one may be Columbus singing as he sails to the new world) but that just makes them more universal.

But the cause for celebration is the performance of four mouth-droppingly talented and diverse cast members with breathtakingly rich voices in solo arias and mixed group efforts: Darius J. Manuel, Cecilia Snow, Timothy Michael Quinn and Heather Jane Rolff. They act the hell out of the angst, ambivalence, fear and longing rather than just stand and deliver the notes as beautifully as they do. They inhabit people confessing, not performing.

The show is comprised of 19 numbers, each delivered with such heart-wrenching honesty that it is unfair to spotlight any of them, but a sampling.… 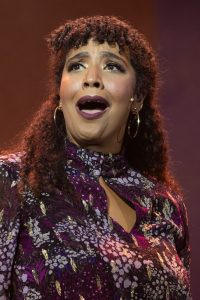 First among equals is Snow whose voice is simultaneously smooth liquid yet bravura in the anthem “I’m Not Afraid of Anything” in which the strong-minded heroine disses the fears of her friends and family, but realizes that her lover will always be afraid of committing completely, and therefore, none of these people will “get behind this wall.” She is a real discovery (locally) who we hope to hear more from.

Manuel, the founder of the fledgling Renegade Theatre and now director of theatre arts at Dillard High School, can bring the house down as the would-be basketball star or silence the audience as a dead soldier’s spirit in “Flying Home.”

Rolff, active in local theaters years ago before working nationally, shows a stunning range from the droll Mrs. Santa Claus berating her annually absent husband, to the Fifth Avenue matron standing on a ledge trying to get the attention of her husband, to a Revolutionary War mother wondering if her son and husband’s service is worth the goal.

Quinn, on loan from a New York, heats up most numbers from the young man bemoaning “The River Won’t Flow” in a world cursed with bad luck, to a man dueting with his ex, realizing that they can’t live without each other.

All of them easily morph through Brown’s score that cinematically slips from – and even combines even in a single number –rock, pop, gospel and jazz. Brown is a highly respected musical theater composer, orchestrator, arranger, musical director, conductor, accompanist and performer. He hasn’t the mass-market high-profile of an Andrew Lloyd Webber, but he is a central figure in the post Webber/Sondheim generation who have spent the past 30 to 40 years expanding definitions and boundaries, names such as William Finn, Jeanine Tesori and Adam Guettel.

Musical theater lovers revere his diverse work that ranges from the sublimely lovely The Bridges of Madison County (mounted by Slow Burn) to the sublimely silly Honeymoon in Vegas. Also in the list is 13, The Last Five Years and Parade.

Rick Pena’s costumes are intentionally generic street clothes. The set is the classic collection of grey ramps and risers with the band visible behind them. The changes in scene rely heavily on the actors’ characterizations and the endlessly fluid lighting changes designed by Clifford Spulock and projections designed by Fitzwater. In other words, this is a low-cost show concentrating on character and theme, not spectacle – a paradigm you can expect to see at many theaters this season. This explains in part why Songs for a New World has been performed likely hundreds of times since bowing in 1995, including opening this weekend at the prestigious Papermill Playhouse in New Jersey.

In an interesting pandemic development, Slow Burn has hired four experienced hands as stand-bys so that a COVID infection will not shut down the show: André Russell, Sean William Davis, Leah Sessa and Tory Vagasy – an America’s Got Talent semi-finalist who warmed up the opening night crowd with Defying Gravity.

At the end of the film, The Color of Money, Paul Newman’s resurrected hustler leans over the pool table and fires off a triumphant break as he announces with undisguised pleasure and pride, “I’m back!”

No one knows what the coming months will bring in quality let alone quantity.  But with openings these past few weeks of Island City Stage, Miami New Drama, Main Street Players and Theatre Lab among others, and several on the calendar such as Zoetic Stage, PPTOPA, the Wick, Lake Worth Playhouse, Actors Playhouse and a dozen others….

South Florida theater, too, is back.

Songs for a New World presented by Slow Burn Theatre Company through Oct. 24  at the Amaturo Theater, Broward Center For The Performing Arts, 201 SW 5th Ave., Fort Lauderdale. Performances are Tuesday through Saturday at 7:30 p.m., Saturday and Sunday at 1 p.m., Sunday at 6:30 p.m. Running time 90 minutes, no intermission. Tickets are $49.00 – $65.00. Call (954) 462-0222 for tickets, at www.browardcenter.org or #Ticketmaster.com; in person at Ticketmaster outlets or the Broward Center’s Auto Nation Box Office. Info at www.slowburntheatre.org

COVID PROTOCOL: Masks required in lobby and auditorium. Ticket, even those bought at the box office, are supplied through email and texts. Outside the theater, staff checks for both ID and proof of vaccination or recent COVID test. Then a green wrist bracelet is attached before entry and security wands for weapons. Printed playbills are available but also can be downloaded. Drinks and snacks available. 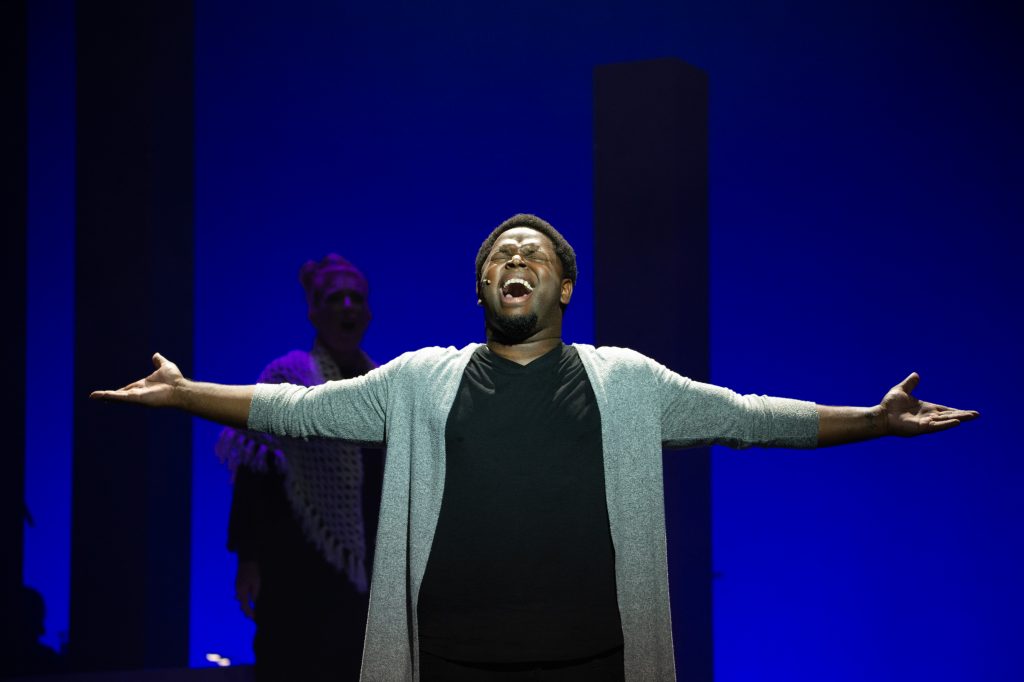