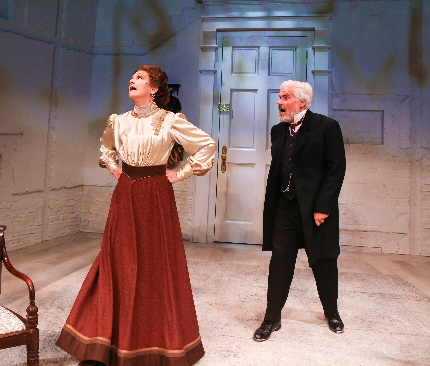 There was no standing ovation at the Friday night performance of A Doll’s House Part 2 at Maltz Jupiter Theatre from the well-heeled senior audience, which had readily given one a few weeks earlier to Mamma Mia!

It’s not that the incisive production didn’t deserve such an accolade; likely the merciless dissection of the institution of marriage resonated too close to home for many to avoid thought-provoking self-examination.

Based solely on the elevator pitch premise – Ibsen’s Nora returns home 15 years after slamming the door – audiences can be forgiven for expecting a play about the consequences of convictions.

But this is pointedly not a sequel. Lucas Hnath’s 2017 drama of ideas laced with humor lays out competing visions of the endless complexities of marriage without siding with anyone.

Throughout, Hnath, director J. Barry Lewis and their cast repeatedly and adroitly subvert similar expectations. For instance, Nora spends much of the opening scene unleashing an impassioned but reasoned diatribe against the institution of marriage as life-sapping suffocation and cruel subjugation. She argues the paradigm should be abandoned completely. The sentiments, taken a bit to extremes, echo those of some 20th Century feminists and the content of her rationales inarguably strike a chord with many in this century. The audience is meant to emerge at least sympathetic and even persuaded to fairly evaluate her arguments.

But in fact, for Hnath, it’s not inarguable. Over the rest of the evening, other characters unreel a shifting procession of different moral high grounds that challenge the contentions of each previous scene in which the audience has been won over and then unmoored. By the play’s end when Nora walks out once more, the previously unassailed, if varied, visions of every audience member about marriage has been questioned with unnerving insights.

The setup is that Nora has created with great effort a new life. Using a pseudonym, she writes highly remunerative “women’s” novels using thinly veiled riffs on her past life as lessons to further her philosophy. But a judge whose wife wants a divorce has discovered her identity and wants revenge. He discovers that Nora’s husband Torvald has never divorced her, making her vulnerable to criminal fraud charges based on a double standard for a married woman. So Nora has returned to try to persuade Torvald to give her a divorce – hoping to enlist the aid of her elderly nanny still in residence, Anne Marie, and the youngest of her three grown children, Emmy.

Continuing the desire to upend expectations, Torvald starts off as one of those slightly befuddled husbands found in current TV sitcoms. Anne Marie seems a devoted plebian servant. Emmy comes off initially as a voluble Valley Girl just back from the mall. But while those personas persist, each is revealed to be far more complicated and more intelligent that we first perceive.

The play and the production are aggressively quirky with regular reminders that this is stylistic theater, not naturalistic cinema. As on Broadway, Emmy is played by an African American actress with no acknowledgment of the racial difference. Scenes are divided by a blast of Marty Mets’ 21st Century electric crackle and the hum of electronic feedback. Anne Mundell’s set is a few elegant chairs dominated by towering white-washed walls leaning in with a hint of the claustrophobia that Nora fled. And, of course, there’s a ten-foot-high door dead center. Tracy Dorman’s period gowns are, it goes without saying, sumptuous.

The cast takes a little while to warm up to their roles as Hnath gives them more depth to play as the evening progresses. Carol Halstead provides a solid fulcrum as a Nora who has discovered her true self and is horrified at the prospect of losing all that she has achieved. Initially, she is a crisp calm evangelist confident in her hard-won beliefs. But as the plot continues, her Nora is frustrated because she begrudgingly acknowledges the legitimacy of the others’ counter-arguments.

Paul Carlin starts out as a hapless clueless Torvald more stunned than angry or resentful. But he, too, is revealed to have more depth than the audience expects and certainly not Ibsen’s antagonist.

Mary Stout, who was the Duchess in the Maltz’s Me and My Girl, is a chatty salt of the earth figure responsible for much of the comedy as she tries to negotiate conflicting demands and loyalties of the family.

Mikayla Bartholomew is the revelation with an Emmy who appears and, indeed is, an overly bubbly, slightly daffy creature whom the audience quickly dismisses.  While Bartholomew correctly never lets go of that exterior, she convincingly shows that there is a brain clicking underneath – a 19th Century Elle Woods. In the penultimate scene, the actress, using Hnath’s words provides a solid counter-argument to Nora’s opening manifesto, thus bringing the play full-circle.

As always, Lewis reaffirms his status as one of the finest directors of serious work in the state, especially in the argument scenes that are as kinetic as cerebral. His staging of the last scene in which Nora and Torvald are on the floor emotionally and physically spent is masterful.

The Obie-winning Hnath is an up-and-coming playwright whose The Christians made a major impact in the past few seasons in New York and in regional theaters such as South Florida’s Outré Theatre Company a few months ago. This work may be one of, if not the, most produced play in regional theaters this season and next.

You do not need to be conversant with “Part One” because Hnath has seamlessly feathered in what you need to know, but the Maltz has slated a quick briefing 45 minutes before each performance.

Credit Maltz chief Andrew Kato for once again inserting a straight play with intellectual rigor (Doubt, Disgraced) as well as humor into its menu of mainstream musicals.

As usual with Maltz plays, the run is short, so get tickets now.