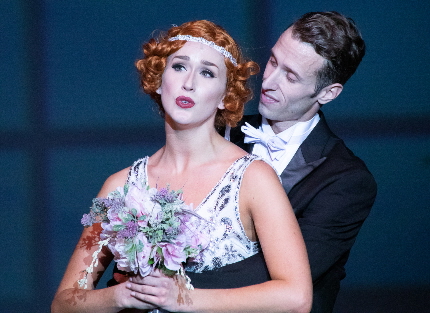 It would be facile and unfair to say the one and only reason to see the Broward Stage Door production of the musical My One and Only is the exuberant joyful tap dancing. The leading lady has a lovely voice. The costumes are sparkly. And the music is by the Gershwins.

But otherwise, this production is what theatrical academics and professional dramaturgs technically call “a mess.” When the dancing stops – and even sometimes during it – the vibe is sluggish and half-baked.

Normally, we don’t get into the technical aspects this early in a review, but the ill-designed, ill-executed lighting and sound undercuts whatever the hardworking cast was trying to do. Actors were singing in the dark; sometimes the digitized music spilling out of speakers overwhelmed the live vocals; very often spotlights came on late; sometimes the microphones were turned up several seconds after a character started speaking or singing. Sometimes they just didn’t come on. Scene changes took a while to pull off in the dark without even music to cover the lull.

We’re not sure who to blame, so we’re not citing names, but it is worth noting that these and similar crimes have crippled other shows mounted at Lauderhill Performing Arts Center.

Before we get back to the good news – the dancing – some background. My One and Only debuted in 1983 as one of those grave robbing musicals cherry picking unrelated but widely recognizable Gershwin hits. Here they include “ ‘S Wonderful,” “Nice Work If You Can Get It,”  “Funny Face,” “Kicking The Clouds Away” and “How Long Has This Been Going On?”

The “creative” team then would cobble together a ludicrous narrative that barely fit the already chosen songs’ content. (Act I here ends with a hero who has always wanted to be honored in a parade. So he sings “Strike Up The Band.” Really.) They were still doing it in 2012 with Nice Work If You Can Get It starring a phone-it-in Matthew Broderick and a glorious-as-always Kelli O’Hara. This entry has a book nearly saved by witty dialogue from Peter Stone and Timothy S. Mayer.

But the draw on Broadway for more than 700 performances was the choreography by Thommie Walsh and the inimitable Tommy Tune. Six-foot-six Tune starred in the show along with five-foot-six British waif-like model Twiggy (we’re not making this up) and featuring veteran tapper Charles “Honi” Coles.

The plot, meant to satirize its forbears, focuses on how amiable tall drink of water Capt. Billy Buck Chandler (Dereck Seay) wants to be the first man to fly solo across the Atlantic in 1927. He falls in love with Edythe Herbert (Caiti Marlowe), an English Channel swimmer and sophisticated star of the International Aquacade, run by Prince Nicolai (Larry Buzzeo). Billy’s determination to win her leads him to get a makeover at Mr. Magix’ Tonsorial and Sartorial Emporial whose owner (Ben Bagby in the Coles role) not only helps his wardrobe but dancing skills as well.

Marlowe has a dulcet voice to caress the Gershwin score and her dancing is just as fine as Seay’s in their terpsichorean duets.

Seay’s voice is softer, sometimes inaudible and has that “lightness” that some of the Golden Age hoofers had like Astaire. But that’s not why he was hired. He was sick over the weekend and that might explain why some early numbers Wednesday were not as crisply executed as they might. But when he hit his stride, no pun intended, he transformed into an engaging awe-inspiring dancer who enraptured the audience.

The high point of the show, hands down, is the title number as Bagby leads Seay in a rousing and extended exhibition of the tap dance craft. To watch these two playing off each other, feet pounding the floor in ever more complex rhythms, is nearly worth the ticket price. While most of the kinetic choreography in the show is by Stage Door regular Danny Durr, this number is Coles’ work recreated by Bagby who was in the original production.

The sparkly costumes are credited to Leonora J. Nikitin with stitching by Katonya Richmond.

My One and Only from Broward Stage Door performing at Lauderhill Performing Arts Center, 3800 NW 11th Place in the Central Broward Regional Park. Performances 8 p.m. Friday-Saturday, 2 p.m. Wednesday, Saturday and Sunday. Runs 2 hours 30 minutes including one intermission. Tickets are $48-$58 plus $5 processing fee. For tickets and more information, call 954-344-7765 or https://www.stagedoorfl.org or https://lpacfl.com.

This entry was posted in Performances, Reviews and tagged Ben Bagby, Caiti Marlowe, Dereck Seay, Lauderhill Performing Arts Center, My One And Only. Bookmark the permalink.